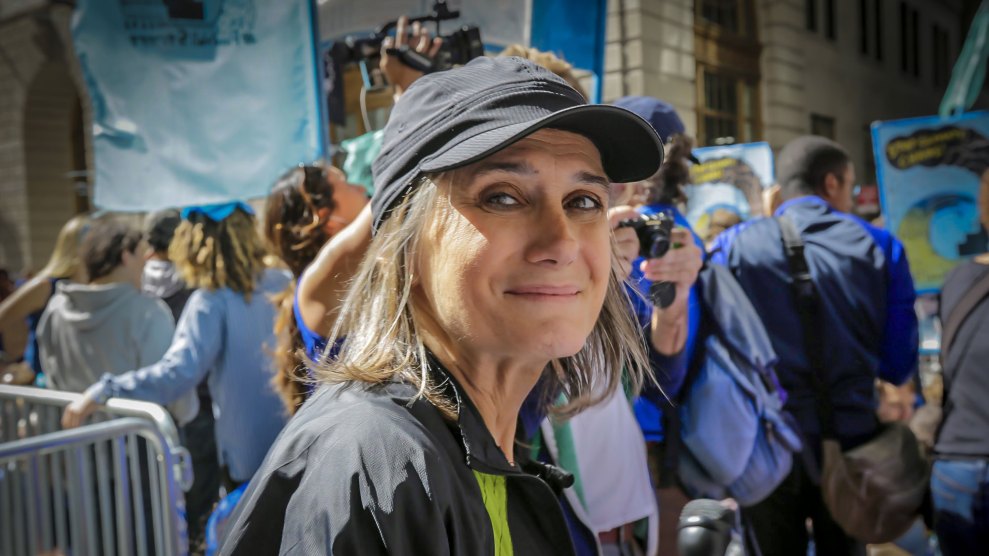 A North Dakota judge on Monday dismissed the criminal charges that had been filed against a journalist over her reporting on a controversial oil pipeline project.

Amy Goodman, host and executive producer of Democracy Now, was facing riot charges related to a report she filed earlier this month from a protest against the Dakota Access Pipeline. At a hearing Monday in Mandan, North Dakota, Judge John Grinsteiner ruled there was no probable cause to support the allegations, and he dismissed the case.

“It’s quite clear to us that the state’s intent is to silence the press.”

The attempted prosecution caused an outcry among environmentalists and free-press advocates. “We are dismayed that a prosecutor has filed charges against Amy Goodman, who was just doing her job by covering protests,” wrote Carlos Lauría of the Committee to Protect Journalists in a statement.

That argument was echoed by Goodman’s defense team Monday. “No journalist should ever be charged with a crime for doing their job,” said Tom Dickson, Goodman’s attorney. “We were vindicated today.”

Protesters gathered outside the courthouse Monday for what turned out to be a celebration, though at least one person was arrested, the Bismarck Tribune reports.

Goodman is not the only journalist to be arrested this month while covering pipeline protests in North Dakota. Last week, documentary filmmaker Deia Schlosberg was arrested while filming demonstrators who shut down tar sands pipelines in Wallhala. Deia is facing three felony charges, which reports say carry a combined maximum sentence of 45 years in prison. Anti-fracking activist Josh Fox, who worked with Schlosberg on the documentary How to Let Go of the World and Love All the Things Climate Can’t Change, has said he was “outraged” by the incident. He called the recent arrests and charges “a worrisome, growing pattern.”

The controversy over the Dakota Access Pipeline has become particularly intense in the past few weeks, with several activists and celebrities being arrested on various charges. Approved in late July, the 1,172-mile pipeline project has attracted passionate protests from Native American rights activists and environmental groups. Leading the charge are members of the Standing Rock Sioux Tribe. The tribe filed a lawsuit seeking to halt construction, saying the pipeline would cut through ancestral lands and threaten its drinking water.

The charges against Goodman were filed after she reported on a clash between protesters and Dakota Access Pipeline security officers, who used dogs and pepper spray in an attempt to disperse the crowd. The video went viral, surpassing 14 million views on Facebook.

At first, Goodman was charged with criminal trespassing, and a warrant was issued for her arrest. Last week, Goodman announced she was returning to North Dakota to fight the allegations. The trespassing charge was ultimately dropped, but on Friday, McLean County State’s Attorney Ladd Erickson filed new charges accusing Goodman of participating in a riot.

“I wasn’t trespassing, I wasn’t engaging in a riot, I was doing my job as a journalist by covering a violent attack on Native American protesters.”

The video Goodman shot shows her identifying herself as a “reporter from New York” as she tries to interview protesters and security officers. But Erickson reportedly told the Bismarck Tribune that Goodman’s story was one-sided and suggested that Goodman shouldn’t be considered a reporter.

“She’s a protester, basically,” he told the Tribune after the trespassing charges were filed. “Is everybody that’s putting out a YouTube video from down there a journalist down there too?”

Erickson’s comments have sparked outrage. “It’s absolutely concerning that that kind of statement could be expressed by a state’s attorney,” said Jennifer Cook, policy director at the American Civil Liberties Union in North Dakota. “It’s quite clear to us that the state’s intent is to silence the press.”

Goodman has defended her work, saying in a statement last week, “I wasn’t trespassing, I wasn’t engaging in a riot, I was doing my job as a journalist by covering a violent attack on Native American protesters.” And Dickson told the Tribune that the charges against his client were “un-American.”

News that Goodman might face jail time for her reporting spread quickly, with many journalists voicing support for her—and disgust with the charges.

“This notion [that Goodman is not a journalist] should disturb anyone who labors in the journalism trenches, particularly those who dedicate their days, and often nights, to covering stories that challenge the mighty and prick at the powerful,” wrote Lizzy Ratner in The Nation.

“We fully support Ms. Goodman for taking this incredibly brave stance and being willing to return North Dakota to fight these charges directly,” wrote Trevor Timm*, executive director of the Freedom of the Press Foundation. “But make no mistake: North Dakota authorities should have dropped these obviously illegal charges as soon as they were issued.”

For her part, Goodman is celebrating her court victory.

“This is a complete vindication of my right as a journalist to cover the attack on the protesters, and of the public’s right to know what is happening with the Dakota Access pipeline,” Goodman said in a story on the Democracy Now website. “We will continue to report on this epic struggle of Native Americans and their non-Native allies taking on the fossil fuel industry and an increasingly militarized police in this time when climate change threatens the planet.”