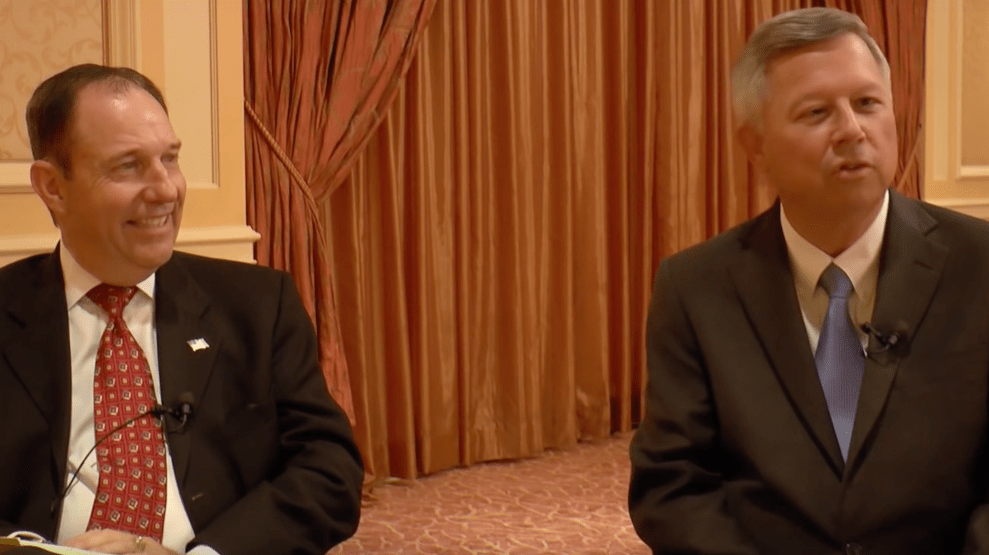 Charles Herbster, left, and former Nebraska Gov. Dave Heineman, make the case for Donald Trump in an interview. Herbster owns Conklin, and Heineman serves on the company's board of directors. <a href="https://www.youtube.com/watch?v=UPoi8lI137U">Screenshot of an interview by Agri-Pulse</a>

On Tuesday, the Donald Trump campaign formally announced its Agricultural and Rural Advisory Committee—a crew of more than 60 GOP politicians (including Texas’ colorful ag commissioner, Sid Miller) and agribusiness execs, chaired as previously announced by Nebraska cattleman and business operator Charles Herbster, whom I wrote about a couple of weeks ago.

Turns out, Herbster’s company is a multilevel marketing operation, like Avon, Amway, or Herbalife.

Since then, I’ve learned something interesting about Herbster’s company, Conklin, a Kansas City-based firm with an odd mix of product lines: pesticide additives called adjuvents; fertilizers for farms and lawns; probiotics for livestock, pets, and even people; industrial roof coatings; and motor oils for “everything from semis to farm equipment to race cars.”

Turns out, it’s a multilevel marketing operation: one of those companies—like Avon, Amway, or Herbalife—that sell their products to the public through a network of individual “distributors” who make money not just based on their own sales, but also from the sales of others they’ve managed to recruit.

The homepage of the Conklin’s website lays out the business model. “Our superior products are your ticket to a financially-independent life. Become a Conklin distributor today! Get Started.” The link goes to a page stating that “in the last 40 years, Conklin has made it possible for thousands of ambitious people to increase their income and achieve financial independence.”

Since it’s privately held and not publicly traded, it’s hard to say how large of a company Conklin is. It’s certainly well connected in Nebraska Republican political circles. When I called the company to ask, the receptionist referred me to the voicemail of Carlos Castillo, vice president of governmental affairs for the company. Before taking the Conklin job, Castillo served as a top aide to former Nebraska Gov. Dave Heineman—who now serves on Conklin’s board of directors and was recently named as a member of the Trump ag advisory committee chaired by Herbster.

In this video, an interview with the trade publication Agri-Pulse released July 27, Herbster and Heineman make the case for Trump.

I have repeatedly called Herbster, Castillo, and Heineman to ask for more information on Conklin, but have so far not heard back.

According to the MLM-promoting website Business for Home, Conklin brought in an estimated revenue of $28 million in 2015—tiny compared with industry giants Amway, Herbalife, and Avon, which drew in billions of dollars per year, and just the 239th largest US MLM, according to the website.

MLM is a highly controversial business model. Critics like Robert FitzPatrick, president of Pyramid Scheme Alert and co-author of the book False Profits: Seeking Financial and Spiritual Deliverance in Multi-level Marketing and Pyramid Schemes, says the model by its nature concentrates profits at the top of the chain and keeps most “distributors” in the red.

FitzPatrick noted that the Federal Trade Commission has long taken an indulgent view of MLMs, distinguishing between “legitimate” and “illegitimate” MLMs. But the agency’s recent settlement with Herbalife “may change all that,” he added. Last month, the giant MLM agreed to pay $200 million to consumers the company “deceived into believing they could earn substantial money selling diet, nutritional supplement, and personal care products,” according to an FTC statement.

Trump himself has made millions from his dealings with multilevel marketing companies.

Conklin has “the classic MLM hallmarks,” FitzPatrick told me. Another MLM expert, Jon Taylor of the Consumer Awareness Institute, echoed FitzPatrick’s assessment of Conklin. He told me Conklin has “all the hallmarks” of an MLM.

Of course, the spectacle of GOP politicians rubbing shoulders with MLM purveyors is nothing new, as Rick Perlstein showed in a 2013 Nation series. The DeVos family, owners of the enormous MLM Amway, have played a large role in shaping the modern Republican Party, as Mother Jones‘ Andy Kroll laid out in a 2014 article.

And Trump himself has dabbled in the MLM business model. He made “millions of dollars for extolling ACN Inc., a multilevel marketing firm that has weathered regulatory investigations in three countries,” the Wall Street Journal reports. And he licensed his name to a vitamin-hawking MLM that became known as Trump Network, whose owners eventually went bankrupt, the Washington Post reports.

With Trump’s surprise success sending the GOP into disarray, he’s apparently having to bring in second-tier MLM titans like Herbster, FitzPatrick told me. He noted that last month’s Republican National Convention featured a speech by a representative of Youngevity, an elixir-selling MLM closely associated with the prominent right-wing conspiracy theorist and broadcaster Alex Jones, an avid Trump supporter.

In the above video interview, Herbster makes a claim about the 2016 presidential campaign that at this point seems as likely as someone achieving “financial independence” by peddling supplements to friends: “I believe we [the Trump campaign] will win. I don’t think there’s any question about that.”