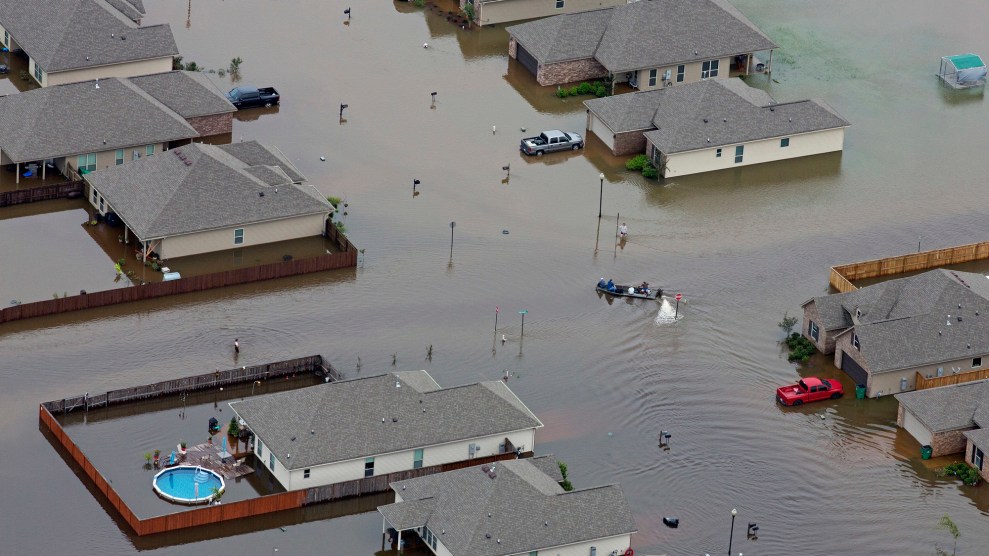 In this aerial photo, a boat motors between flooded homes in Hammond, Louisiana, on August 13. Max Becherer/AP Photo

The relief effort in Louisiana is ramping up after 10 days of monumental flooding. On Tuesday, President Barack Obama will visit Baton Rouge to survey the damage and find out how the federal government can help. The Red Cross has repeatedly described the flooding as “the worst natural disaster to strike the United States” since Hurricane Sandy hit the East Coast in 2012.

But for those who aren’t on the ground in Louisiana, it can be difficult to understand what that really means. Here are some numbers that compare the two disasters.

Deaths and damaged homes: Thirteen people have died and about 60,000 homes have been damaged in the flooding that began in Louisiana on August 12. As of Friday, the Obama administration listed 20 parishes in the state as disaster areas, making federal funding available to assist those communities. Hurricane Sandy had a bigger death toll, claiming 72 lives in the United States and damaging 200,000 homes. But that storm hit a much wider swath of land, including metropolitan centers like New York City, whose population is nearly double that of the entire state of Louisiana.

“The Red Cross has mobilized our largest sheltering and feeding effort since Superstorm Sandy with the flooding in Louisiana,” said Molly Dalton, a spokeswoman for the humanitarian organization. “It’s the largest volume of people in need of emergency shelter in the last four years…In addition, FEMA has reported really high numbers of people registering for emergency assistance, which is another indicator we’re going by.”

“It’s not possible to estimate the full impact of the Louisiana floods this early in the response, and every disaster is different, so it would be difficult to make any comparison to past disasters,” another Red Cross spokesperson told Mother Jones on Monday. “But we do know that this is going to be a massive response.”

Meals served: “So far in Louisiana in the first week, we’ve served 158,000 meals, and if you look at the same point in Sandy, we had served 164 [thousand],” Dalton said Friday. “So as far as what we’re seeing then and what we’re seeing now, it’s very, very similar.”

It’s important to remember, she said, that Hurricane Sandy struck many more states, stretching from New England as far south as the District of Columbia. “This is just one area of Louisiana,” she added. “So if you look at it that way…it’s a very devastating disaster.”

At the peak of the deluge, Louisiana was hit by 6.9 trillion gallons of rain between August 8 and August 14, or roughly 10.4 million Olympic-size swimming pools‘ worth of water. The flooding is receding now, particularly in the northern reaches of the state, though some areas in the south will take longer to dry out, says Gavin Phillips, a meteorologist with the National Weather Service. “It’s going down everywhere now,” he says. “There’s nothing worsening at this point.”

The Red Cross estimates the relief effort in Louisiana could cost at least $30 million, though that number may grow as relief workers learn more about the scope of the disaster. As of Monday, the humanitarian organization had received about $7.8 million in donations and pledges.

While Hurricane Sandy and the recent Louisiana flooding were devastating, they pale in comparison to Louisiana’s other famous disaster, Hurricane Katrina, which hit the Gulf Coast 10 years ago, killing at least 1,833 people.