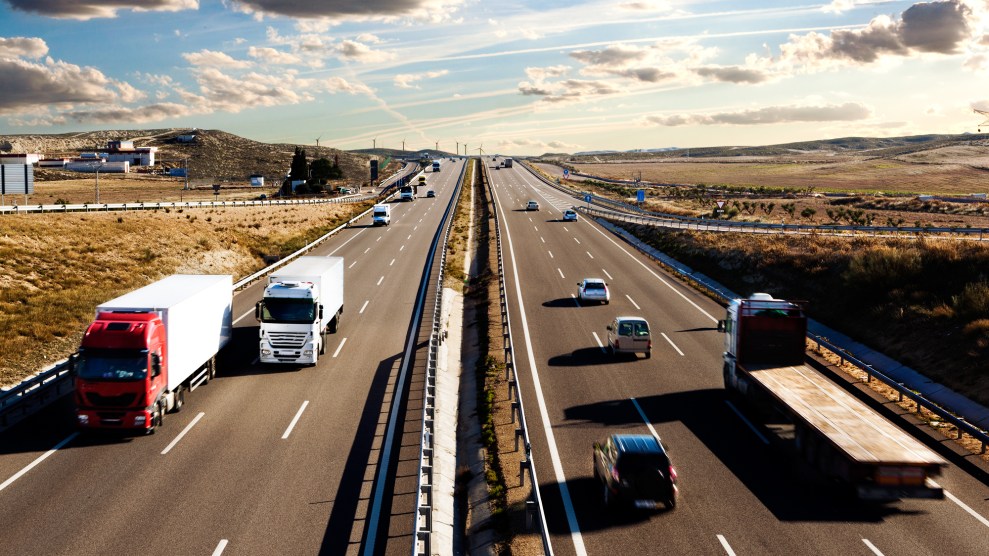 The Obama administration has announced new regulations to make trucks, buses, and other heavy-duty vehicles more fuel efficient—a move that could help fight global warming and clean up the unhealthy air we breathe in cities and near highways.

The fuel-efficiency standards, rolled out by the Environmental Protection Agency and the Department of Transportation on Tuesday, will likely require an investment in more expensive vehicles, but those costs will likely be offset by huge savings in fuel—usually the single biggest cost for trucking fleets. Once they’re fully implemented, the new regulations are expected to slash fuel spending by about $170 billion, while reducing carbon dioxide emissions by about 1.1 billion metric tons and reducing oil consumption by tens of billions of barrels.

Trucks and other heavy-duty vehicles currently account for more than 20 percent of transportation-related fuel consumption and greenhouse gas emissions in the United States, according to the EPA. The new fuel efficiency standards will cover medium- and heavy-duty vehicles through 2027. “Today’s ambitious but achievable announcement is a huge win for the American people, giving us cleaner air, more money saved at the pump, and real benefits for consumers across the supply chain,” Transportation Secretary Anthony Foxx said in a statement.

As part of the upgrade to more efficient vehicles, the Obama administration is encouraging technologies that reduce the amount of fuel that’s lost when drivers idle their engines. That’s a big deal—since idling is responsible for an awful lot of pollution and wasted gas.

Long-haul trucks idle as much as eight hours a day, 300 days a year, resulting in $6,000 annually per truck in lost fuel.

Every year, cars, trucks, and heavy-duty vehicles like tractor-trailers, school buses, and fire engines guzzle more than 6 billion gallons of fuel simply by idling their engines—the same amount used in two weeks of highway driving, and 7 percent of the amount the new fuel efficiency standards will save. People idle for many reasons: to warm their engine oil, or to use heaters or air conditioning. Bus drivers often idle while waiting for passengers to get on and off, and police officers, firefighters, and EMTs do it to power equipment. Because idling causes a lot of particle pollution—about 5,000 tons every year, mostly from diesel engines—many states and municipalities have passed laws to restrict the practice. A few examples:

School buses: In a single day, children can breathe anywhere from 7 to 70 times more exhaust from a school bus than the average resident of an urban area is exposed to. In California, bus drivers are required to shut off their engines when stopped within 100 feet of a school, and they can only idle for 30 seconds before driving away. In Connecticut, bus drivers can be fined up to $500 if caught idling for more than three minutes.

Trucks: According to the EPA, long-haul trucks idle as much as eight hours a day, 300 days a year, resulting in $6,000 annually per truck in lost fuel. Most states have rules about how long trucks can idle, but they are not popular with truckers, who need to maintain a comfortable temperature (or to watch TV) during their required rest periods. Some truck stops have taken matters into their own hands, installing plug-in power stations—which truckers like because it’s cheaper than wasting gas.

Cars: A handful of states restrict car idling to three or five minutes. In Hawaii, idling is illegal in many areas—even for a few seconds—unless you’re servicing your engine, operating auxiliary equipment, unloading or loading passengers, or warming up or cooling down your vehicle. In New York City, City Council members introduced a bill in March 2015 that would have encouraged people to submit videos of vehicles idling longer than three minutes, and to receive a reward if civil penalties result.

Ships: When ships idle at ports, their massive diesel engines produce staggering amounts of pollution. In Los Angeles, for example, ship emissions dwarf those from all the power plants in the region combined. A 2007 study found that particle pollution from oceangoing ships worldwide led to about 60,000 deaths per year. To reduce idling, the Port of Los Angeles recently introduced power hookups similar to those found at truck stops.

To learn more about the air pollution from heavy-duty vehicles—and how it affects our health—check out this Mother Jones investigation.