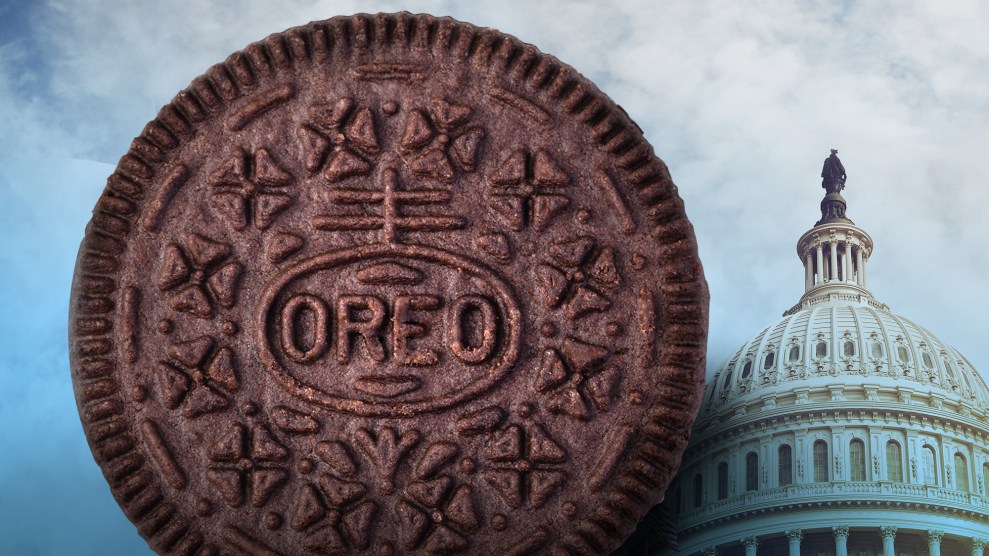 Last week, cookie-and-candy giant Mondelez International tried to buy US chocolate titan Hershey. Hershey’s board formally rejected the $23 billion buyout offer, but negotiations are ongoing and a deal could still happen. The potential tie-up between the maker of Oreos and the creator of the Kiss and Reese’s Peanut Butter Cups drew little coverage outside of the business press, mostly because such mega-mergers among food and beverage companies have become commonplace. So much so, that the industry has become a “game of monopoly,” as one market analyst recently put it.

But there’s evidence that Democrats are finally ready to fight back and exert antitrust authority over markets that have become dominated by a handful of massive players.

Take the recently released draft of the Democratic Party’s platform for the 2016 presidential election. It contains a plank aimed at “stopping corporate concentration” and vows to “make competition policy and antitrust stronger and more responsive to our economy today, [and] enhance the antitrust enforcement arms of the Department of Justice and the Federal Trade Commission.” If the clause makes it into the final version, it will mark the first time since 1984 that a Democratic Party platform has mentioned antitrust policy, says Barry Lynn, director of the Open Markets program at the New America think-tank.

For the first time since 1984, the Democratic Party platform has mentioned antitrust policy.

As Lynn showed in a classic 2006 Harper’s essay—later expanded into this 2010 book—the Democratic Party shifted its view on antitrust in the 1980s, under pressure from President Ronald Reagan. There are two ways companies wield market power. The first is monopoly: They use their market heft to impose inflated prices on consumers. The second is called monopsony. That’s when dominant companies use their weight to squeeze their suppliers—everything from their own work forces to the companies that sell them inputs—into giving them better terms.

In the ’80s under Reagan, the authorities essentially began to ignore monopsony power and focus solely on challenging monopoly, Lynn shows. It was a convenient change for Big Business, because gouging consumers on price was now passé; the path to profit growth lay in gouging suppliers on cost. Since few companies have been using their market heft to command higher prices from consumers, antitrust enforcement has waned since Reagan; regulators welcomed mega-deal after mega-deal.

The result, Lynn shows, was the rise of an “Everyday Low Prices” economy. The food industry is probably the best example of the post-Reagan monopsony trend. Lynn shows that Walmart’s push into groceries, starting in the 1990s, accelerated the industry’s already-rapid consolidation. In order to remain profitable despite Walmart’s constant demand for more products at ever-lower prices, food companies had to get bigger and bigger—and constantly hunt for opportunities to slash their expenses. So big retailers demand that the companies that supply them say, meat, deliver lower prices; and those companies, in turn, demand lower prices from the farmers that supply their livestock. Principles like fair wages, environmental stewardship, and animal welfare come under severe pressure from such a hyper-focus on cost-cutting.

To this day, big fish keep swallowing up little fish, hoping to translate ever-increasing size into profit. If chemical behemoths Dow and DuPont combine as planned, the same five companies will own around around 60 percent of the entire globe’s seeds and pesticides, and DowDuPont’s agribusiness arm will surpass even Monsanto and Syngenta in girth. Even greater concentration levels prevail in the US meat industry, where there are so few remaining players that companies like Perdue and Hormel have taken to snapping up niche producers like Niman Ranch and Applegate.

The Democratic Party’s rediscovery of corporate concentration as a concern in the current draft of its platform isn’t the only sign that this long M&A-fest may soon be raided by federal cops. Lynn also points to a blistering speech by Sen. Elizabeth Warren (D-Mass.) last week at a New America event. It was the “most important speech on political economy delivered by an American politician in nearly 80 years,” Lynn argues. He saw Warren’s speech as the most complete public repudiation of market-dominating corporations by a US politician since President Franklin Roosevelt thundered against what he called the “concentration of control” by “a small number of dominating corporations” in a 1938 speech to Congress.

Warren didn’t shy away from naming names: “Walmart is notorious for the low wages and poor working conditions it offers, and the Walmart effect has an impact on suppliers as well, forcing them to cut their own workers wages and benefits to keep Walmart’s business.”

And like FDR before her, Warren noted that “concentrated markets create concentrated political power,” because big, market-dominating firms have plenty of resources to invest in lobbying and campaign finance. “Over time, this means a closed, self-perpetuating, rigged system—a playing field that lavishes favors on the big guys, hammers the small guys, and fuels even more concentration,” she stated.

Warren spelled out a vision for revitalized antitrust enforcement. The Department of Justice and the Federal Trade Commission “have the authority to stop harmful mergers in their tracks,” but “too often, though, they don’t use that authority,” she said. Other federal agencies, too, can step up, she added. For example: “The Agriculture Department has a role to play in making sure that poultry farmers and produce growers aren’t held hostage to the whims of giant firms.”

Nor is Warren the only emerging Democratic power player banging this drum. On his presidential campaign website, Sen. Bernie Sanders (D-Vermont), laments that a “few large companies dominate many agricultural industries, allowing them to force unfair prices on farmers,” and vows to “enforce our country’s antitrust laws against large agribusiness and food corporations.” Until recently, such pronouncements from a democratic-socialist backbencher from a small state would be hollow. But now Sanders has real national stature from his surprisingly momentous challenge to presumed nominee Hillary Clinton, as well as a powerful Senate ally in Warren.

Concentration in agriculture markets has gotten so great that even some members of the the Republican party are crying foul.

Concentration in agriculture markets has gotten so great that even some members of the the Republican party are crying foul. Last month, Sen. Chuck Grassley (R.-Iowa) publicly urged President Barack Obama’s antitrust chief to take a hard look at the Dow-DuPont merger, based on concern that it will “decrease competition in an agriculture sector that has already been subject to a number of waves of consolidation in recent years.”

Would a President Hillary Clinton listen to such voices and deploy her Department of Justice to challenge monopsony power in future food and agriculture mergers and buyouts? It’s hard to say. She famously served on Walmart’s board from 1986 to 1992. She also maintained tight relations with meat giant Tyson in her Arkansas days—as did her husband, who presided over rapid consolidation of the meat industry as president in the 1990s. But when Bill Clinton ruled the White House, a generally indulgent attitude toward corporate giantism, even among Democrats, held sway. Hillary Clinton would operate in a changed landscape, and Big Food and Big Ag might be in for a shock.