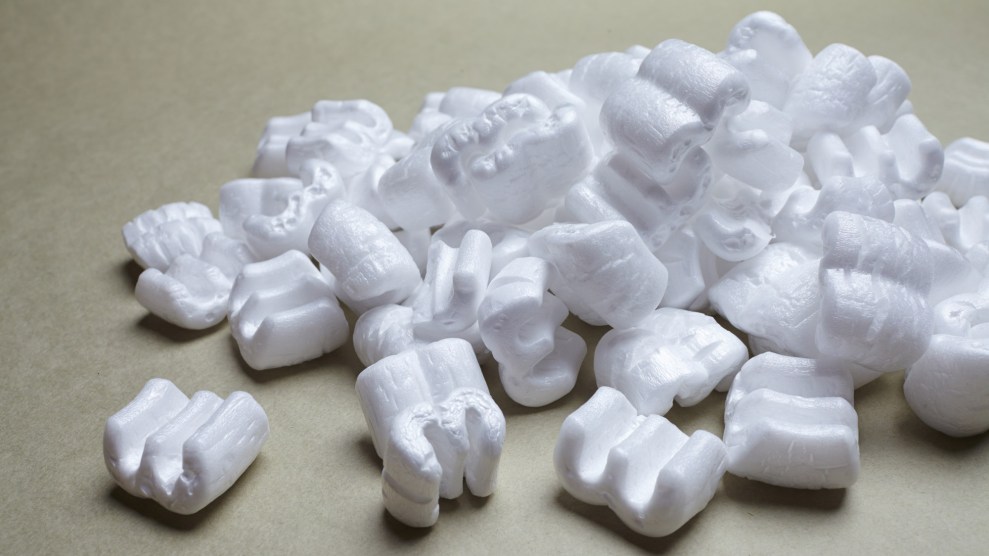 San Franciscans, bid adieu to Styrofoam. On Tuesday, the city unanimously passed an ordinance banning the sale of any product made from polystyrene, the petroleum-based compound that’s molded into disposable dishware, packing materials, and beach toys—among other things. Even though it’s commonly known as Styrofoam, that’s just a name-brand owned by the Dow Chemical Company.

It’s not SF’s first such restriction. In 2007, the city prohibited the use of polystyrene use in all to-go food containers. More than 100 cities, along with Washington, DC, now have similar laws in place. (The first Styrofoam ban was passed in 1988 by the city of Berkeley.) But San Francisco’s new ordinance, part of the city’s goal of “zero waste” by 2020, is the broadest yet. As of January 1, 2017, it will be unlawful to sell polystyrene packing materials (those infuriating foam peanuts, for instance), day-use coolers, trays used in meat and fish packaging, and even foam dock floats and mooring buoys.

Polystyrene’s story begins in the first half of the 20th century, but it didn’t become a staple of our everyday lives until the second half, when world production of plastic resins increased 25 fold. Before long, polystyrene was synonymous with take-out food, barbeque plates, and disposable coffee cups—Americans today still use an estimated 25 billion foam cups each year.

This week’s ban is a victory for environmentalists, who since the late 1970s have been up in arms over polystyrene’s impacts on marine life and waterways. (Recent evidence suggests the resins may be problematic for human health.) Polystyrene breaks down into tiny pieces, easily blown into the sea, where birds and fish often mistake them for food. The nonprofit Agalita Marine Research and Education found that about 44 percent of seabirds have ingested plastic, and 267 species of marine life are affected in various ways by plastic trash. (Witness photographer Chris Jordan’s devastating bird photos.)

Polystyrene waste contributes to the horrifying notion that by 2050, we may have more plastic in the ocean than fish.

While polystyrene is said to never completely break down in landfills, it actually can decompose in the oceans. The stuff eventually sinks, which makes it difficult to know how much of it exists. And polystyrene contributes to the horrifying notion that by 2050, we may have more plastics in the ocean than fish.

Critics of the new ban are quick to point out that polystyrene is recyclable—a judge actually overturned New York City’s ban on to-go containers last year, ruling that the city could make big money recycling the stuff. But while San Francisco residents can bring large pieces of polystyrene to a transfer station free of charge, it rarely gets recycled. The problem, says Robert Reed, a local project manager for Recology, a company that helps cities manage solid waste, is that few people bother to bring in their Styrofoam, and when they do, it’s usually not in good enough condition to be repurposed. (It can be melted down and used as trim or molding for building construction.) “The few buyers who exist demand that the material be very clean,” Reed says in an email. “They don’t even want dust on it.”

The American Chemistry Council, the trade group for chemical makers, opposed the city’s ban, arguing that polystyrene’s light weight results in less carbon emissions when products are transported. The group urged the city to consider the environmental costs of all packaging materials, as polystyrene will likely be replaced with compostable foams. “All packaging leaves an environmental footprint,” Tim Shestek, the council’s senior director, said in a statement.

“Compostables are not the silver bullet,” concedes Samantha Sommer, a project manager with Clean Water Action California, which aims to curb single-use products. Even compostable products, she says, “come from resources; it takes resources to produce, it produces energy and water emissions throughout its life cycle, and then becomes difficult to manage.”

But Styrofoam all the more so.