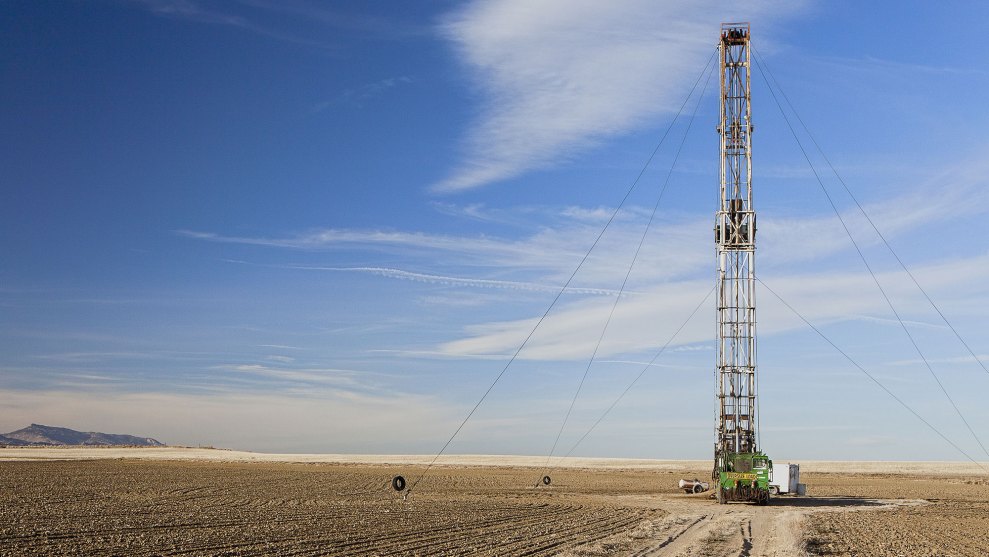 A major push by the Obama administration to curb the environmental impacts of fracking suffered a severe blow Wednesday evening, when a federal judge in Wyoming ruled that the proposed regulations overstepped the government’s authority. The decision could mean that President Barack Obama will leave office without delivering on one of environmentalists’ biggest demands: Clamping down on air and water pollution from the chemicals used in fracking, a controversial oil and gas drilling technique that has driven the country’s oil and gas boom during Obama’s tenure.

The Interior Department had sought to require inspections of fracked oil and gas wells on public land, and also to require that companies publicly disclose the chemicals used in those wells. (Fracking entails injecting a high-pressure cocktail of water, sand, and chemicals into underground shale formations.) The proposal was contested by the state of Wyoming, a major producer of natural gas, and by a group of oil industry trade groups. According to the ruling by Judge Scott Skavdahl, an Obama appointee, “Congress has not delegated to the Department of Interior the authority to regulate hydraulic fracturing. The [Bureau of Land Management]’s effort to do so through the Fracking Rule is in excess of its statutory authority and contrary to law.”

Only about 10 percent of the nation’s fracking operations take place on federal land, according to the New York Times—the rest happens on state, local, or private land that would not have been subject to the federal regulations. Still, the rules would have given Obama a significant environmental victory and would help counter the argument put forth by many activists that his legacy on climate change has been muddied by the fracking boom.

Another regulation that could restrict fracking, focused on methane emissions from oil and gas wells, was released by the Environmental Protection Agency in May and is likely to face a similar slate of litigation that could unfold after Obama leaves office.

In any case, the ruling “is not the final word,” as the Times explains:

While the regulation will be temporarily halted, the federal Court of Appeals for the 10th Circuit is also reviewing the rule. Obama administration officials characterized Judge Skavdahl’s ruling as a delay, and said they were waiting for the decision by the appeals court.

“It’s unfortunate that implementation of the rule continues to be delayed, because it prevents regulators from using 21st century standards to ensure that oil and gas operations are conducted safely and responsibly on public and tribal lands,” the Interior Department said in a statement from the agency’s spokeswoman, Jessica Kershaw.