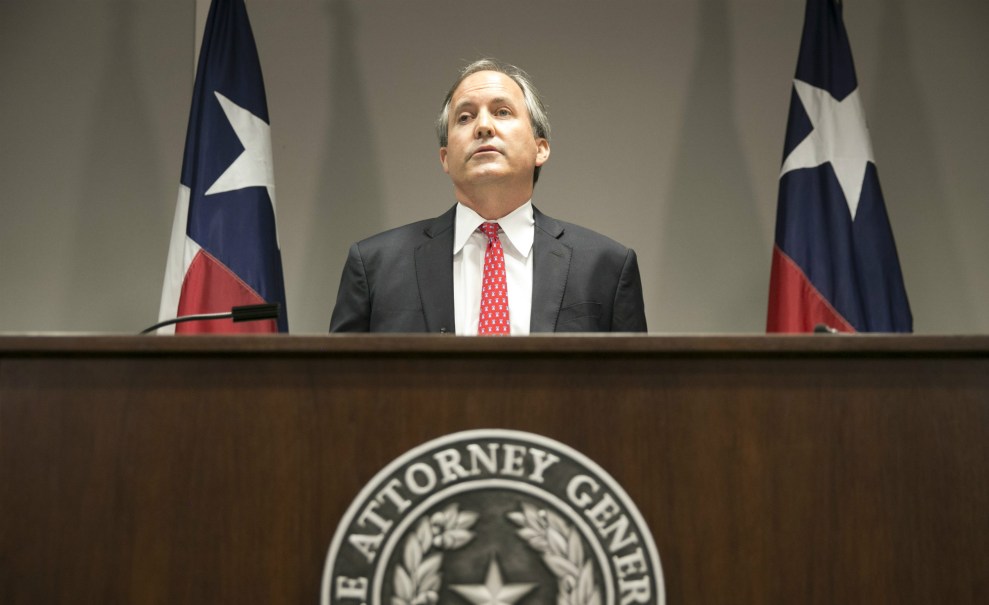 Texas Attorney General Ken Paxton took Exxon's side in the company's legal battle with the US Virgin Islands. Exxon won a major victory in the case on Wednesday. Jay Janner/AP

Does Exxon Mobil have a constitutional right to sow doubt about climate science? That’s the subject of a high-stakes legal battle playing out between dozens of state attorneys general, members of Congress, corporate executives, and activists.

Last fall, investigations by Inside Climate News and the Los Angeles Times revealed that the oil giant has decades of internal documents showing that its own scientists and executives knew fossil fuels contributed to climate change. Publicly, the company argued that the threats posed by global warming were far from certain, presumably as part of an effort to fight off regulations. 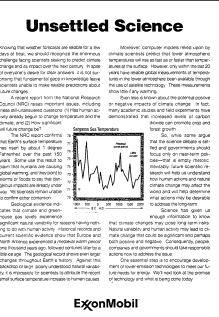 The revelations have sparked a barrage of legal actions. The attorney generals of Massachusetts, California, and New York launched investigations of Exxon, while Democratic AGs from other states have expressed their support. Some have drawn parallels to the tobacco industry’s deception on the dangers of smoking. Exxon has countered that the investigations are unconstitutional and has filed motions asking courts to block the subpoenas. “This…is about freedom of political speech,” the company recently argued in the Massachusetts case.

In March, US Virgin Islands Attorney General Claude Walker served the company with a subpoena seeking records that he claimed might prove that Exxon had defrauded consumers and the government by “misrepresenting its knowledge” that its fossil fuels contribute to climate change. Walker specifically pointed to a state racketeering statute that prohibits obtaining money by false pretenses. He demanded any documents detailing Exxon’s knowledge of climate change and its strategies to address it, including research studies, publications, statements, and communications with outside groups. Exxon responded by filing a lawsuit against Walker to block the subpoena. Exxon prevailed on Wednesday, when Walker agreed to withdraw the subpoena.

Exxon received some unusual assistance in its victory in the Virgin Islands case. Texas Attorney General Ken Paxton, a tea-party-aligned Republican, went so far as to formally intervene—that is, he asked the court to allow the state of Texas to become a party to the case. Exxon, he wrote, had a First Amendment right to withhold the documents Walker was seeking. The brief was also signed by Alabama Attorney General Luther Strange (R). (Paxton and Strange also objected to Walker’s use of a private law firm to help conduct the investigation.)

“If we were intervening on behalf of someone, it would be the Constitution,” says Paxton’s deputy.

In a press conference in May, Paxton had called Walker’s investigation “a fishing expedition of the worst kind” and said it represented “an effort to punish Exxon for daring to hold opinions on climate change that differ from theirs.”

On June 15, Paxton and 12 other GOP attorneys general signed a letter criticizing the Exxon investigations. The letter laid out a free-speech argument in stark terms, saying, “Actions indicating that one side of the climate change debate should fear prosecution chills speech in violation of a formerly bi-partisan First Amendment consensus.”

Exxon, which is headquartered in Texas and is a major employer in the state, did not respond to a request for comment. The company’s former vice president of public and government affairs, Kenneth P. Cohen, previously told the New York Times, “We unequivocally reject the allegations that Exxon Mobil has suppressed climate change research.”

Paxton’s involvement in the case alarmed some environmentalists, who note that attorneys general are charged with enforcing state laws and regulations. It’s unusual for a state to intervene in support of a company that is under investigation, said Stacey Geis, managing attorney at Earthjustice, an environmental law organization.

It’s as if Paxton were trying to act as Exxon’s lawyer, she said.

“If we were intervening on behalf of someone, it would be the Constitution,” he said in a phone interview.

Michael McConnell, a Stanford law professor and senior fellow at the conservative Hoover Institution, agreed that Paxton’s intervention was “highly unusual.” Nevertheless, he added in an email that Walker’s subpoena was “quite possibly unconstitutional.” Exxon, he said, has “a right to have a position on global warming.”

Other scholars and activists reject that argument. Naomi Ages, a project leader at environmental advocacy group Greenpeace, called the Virgin Islands investigation “legitimate” and said Paxton’s intervention was “unprecedented” and based on “pretty specious legal grounds.”

Robert Post, the dean of Yale Law School, argues that it is “irresponsible to invoke the First Amendment” to defend Exxon. “There are circumstances when scientific theories must remain open and subject to challenge, and there are circumstances when the government must act to protect the integrity of the market, even if it requires determining the truth or falsity of those theories,” wrote Post in a Washington Post op-ed last week. “Public debate must be protected, but fraud must also be suppressed.”

Starr counters that the Texas AG’s office was not claiming corporations can never be investigated for fraud, but rather that an investigation cannot be based on a public policy debate. “What we shouldn’t do is investigate public debate and say that there’s only one side of the public debate that we’re investigating,” he said.

Paxton has received nearly $1 million dollars in contributions from the oil and gas industry during his seven runs for public office, according to the National Institute on Money in State Politics. During a recent event at the conservative Heritage Foundation, he warned that the investigation of Exxon could have resulted in job losses in his state, though he declined to provide a specific estimate of how many jobs were in jeopardy.

Meanwhile, Paxton is facing legal challenges of his own. The Securities and Exchange Commission filed a complaint against him in April, alleging that he had recruited investors for a company without disclosing that he was receiving compensation in the form of stock in the company. This complaint followed three state criminal indictments on charges of securities fraud and failing to register as an investment adviser.

In a video released by his campaign in May, Paxton called the charges “false” and “politically motivated.”

When asked for comment on the SEC investigation at the Heritage Foundation event, Paxton declined to answer.

On Thursday, Paxton released a statement hailing the withdrawal of Walker’s Exxon subpoena as a triumph for free speech.

“The so-called ‘investigation’ by Walker was a constitutionally improper attempt to suppress the freedom of speech based only on the content being communicated. In America, we have the freedom to disagree, and we do not legally prosecute people just because their opinion is different from ours.”