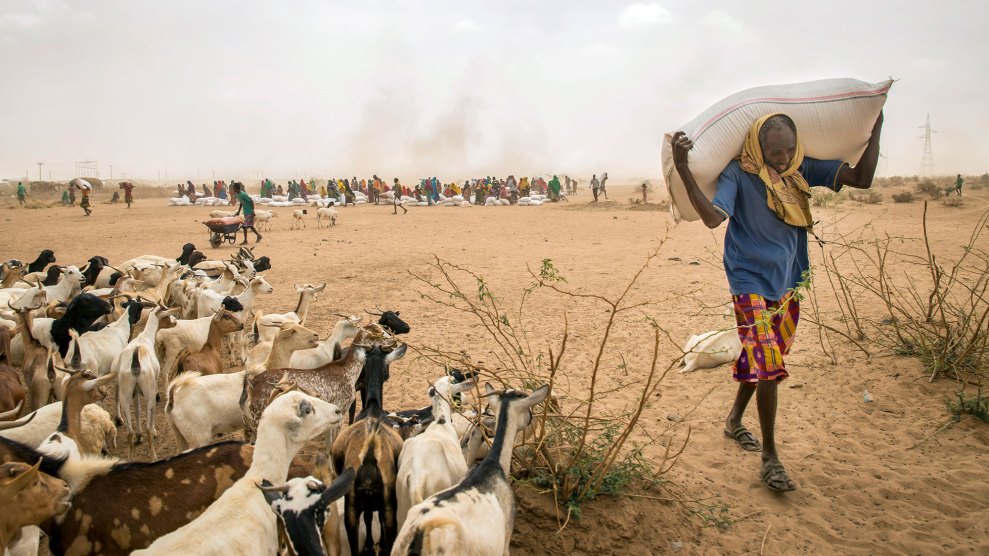 A man carries animal feed in the Sitti Zone of Ethiopia on April 8, 2016, near the border with Somalia. The region is afflicted by a severe drought.Mulugeta Ayene/AP

Last December, the climate summit in Paris offered journalists an unprecedented opportunity to reframe the global warming story. Climate reporting used to rest on the tacit understanding that the problem is overwhelming and intractable. That no longer rings true. While we have a better understanding than ever of the potential calamity in store, we finally have a clear vision of a path forward—and momentum for actually getting there.

To that end, Paris was a turning point for me personally, too: It was the end of the beginning of my career as an environmental journalist. This week I’m leaving Mother Jones after five years covering climate and other green stories. Paris underscored that it’s past time for me to look beyond the borders of the United States. That’s why, this fall, I’m going to undertake a Fulbright-National Geographic Digital Storytelling Fellowship. For at least nine months, I’ll move between Kenya, Uganda, and Nigeria to document how climate change is affecting food security.

Agriculture in Africa is one of the most important yet underreported stories about climate change today.

I see agriculture in Africa as one of the most important yet underreported stories about climate change today. It’s a fascinating intersection of science, politics, technology, culture, and all the other things that make climate such a rich vein of reporting. At that intersection, the scale of the challenge posed by global warming is matched only by the scale of opportunity to innovate and adapt. There are countless stories waiting to be told, featuring a brilliant and diverse cast of scientists, entrepreneurs, politicians, farmers, families, and more.

East Africa is already the hungriest place on Earth: One in every three people live without sufficient access to nutritious food, according to the United Nations. Crop yields in the region are the lowest on the planet. African farms have one-tenth the productivity of Western farms on average, and sub-Saharan Africa is the only place on the planet where per capita food production is actually falling.

Now, climate change threatens to compound those problems by raising temperatures and disrupting the seasonal rains on which many farmers depend. An index produced by the University of Notre Dame ranks 180 of the world’s countries based on their vulnerability to climate change impacts (No. 1, New Zealand, is the least vulnerable; the United States is ranked No. 11). The best-ranked mainland African country is South Africa, down at No. 84; Nigeria, Kenya, and Uganda rank at No. 147, No. 154, and No. 160, respectively. In other words, these are among the places that will be hit hardest by climate change. More often than not, the agricultural sector will experience some of the worst impacts. Emerging research indicates that climate change could drive down yields of staples such as rice, wheat, and maize 20 percent by 2050. Worsening and widespread drought could shorten the growing season in some places by up to 40 percent.

This isn’t just a matter of putting food on the table. Agricultural productivity also lies at the root of broader economic development, since farming is Africa’s No. 1 form of employment. So, even when hunger isn’t an issue, per se, lost agricultural productivity can stymie rural communities’ efforts to get the money they need for roads, schools, clinics, and other necessities. “We only produce enough to eat,” lamented Amelia Tonito, a farmer I met recently in Mozambique. “We’d like to produce enough to eat and to sell.” More food means more money in more pockets; the process of alleviating poverty starts on farms.

The story goes beyond money. Hunger, increased water scarcity, and mass migrations sparked by natural-resource depletion can amplify the risk of conflict. Al-Shabaab in Kenya and Boko Haram in Nigeria have both drawn strength from drought-related hunger.

This is also a story about new applications for technology at the dawn of Africa’s digital age. It’s a story about gender—most African farmers are women—and the struggle to empower marginalized sectors of society. It’s about globalization and the growth of corporate power, as large-scale land investors from Wall Street to Dubai to Shanghai see a potential windfall in turning East and West Africa into a global breadbasket. Such interventions could boost rural economies—or disenfranchise small-scale farmers and further degrade the landscape.

Of course, all the data points I’ve just mentioned are only that: cold, lifeless data. They work as an entry point for those of us who are thousands of miles away from Africa. But they don’t tell a story, and they won’t lead to action. They won’t help Amelia Tonito improve her income. My hope is my coverage of this story will help provide the depth of understanding that is a prerequisite for holding public and corporate officials accountable, so that the aspirations of the Paris Agreement can start to come to fruition.

I’ve loved my time at Mother Jones and I’m truly at a loss to express my gratitude to my editors for the experiences they have afforded me. I’ve seen the devastating impacts of global warming, from the vanishing Louisiana coastline to the smoldering wreckage of Breezy Point, Queens, after Superstorm Sandy. And I’ve seen the cost of our fossil fuel addiction, from the dystopian fracking fields of North Dakota to Germany’s yawning open-pit coal mines. But I’ve also seen the fortitude of the young Arizonans who spent weeks sweating in the woods to protect their community from wildfires. And I’ve seen the compassion of a caretaker who, in the aftermath of Sandy, stayed with her elderly patient on the top floor of a Lower East Side high-rise with no electricity or running water.

Encounters like these are what draw me to climate change as a beat. The story is just getting started.