For a sign that Josh Willis isn’t your typical NASA scientist, let’s start with the name of his major new climate study: Oceans Melting Greenland. That’s “OMG,” if your mind isn’t the sort to instantly elide everything into texting lingo.

Willis, a researcher at NASA’s Jet Propulsion Laboratory, likes to inject a little humor into the science of climate change, taking to the stage and to YouTube in the hopes of spurring his audience to action. On this week’s episode of the Inquiring Minds podcast, he’s joined by special guest “Dick Dangerfield,” the swashbuckling NASA pilot who stars in Willis’ new comedy web series, “The Adventures of Dick Dangerfield.” Oh, and Dick is also a puppet. You can watch the first episode above.

Willis and Dangerfield talk with co-host Kishore Hari about NASA’s mission to study Greenland’s melting ice and its massive climate-altering potential. “Greenland contains enough ice to raise sea levels 20 feet if it all melted,” Willis says. “The big question is how fast it’s going to melt.”

Most research takes a top-down approach to the melting of the Greenland ice sheet, Willis says, examining the flow of water as it melts off the surface of the glaciers. But due to changing ocean temperatures, the ice around the island’s edges is disappearing even more quickly than it is at the center. That’s partly due to Greenland’s unique geography; the massive glaciers “literally have a toe in the water,” he explains. They flow directly into deep ocean water that is saltier and warmer than the water near the surface. The deeper water, which is typically a few degrees Celsius above the melting point, nibbles away more ice in the warm months than can be replenished over the winter, causing the glaciers to gradually recede. 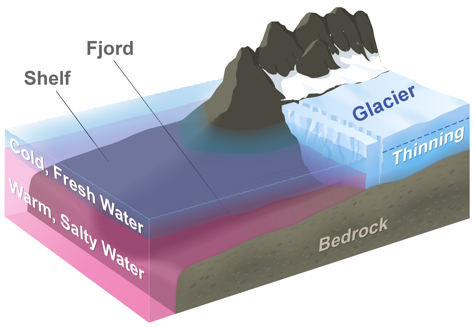 Greenland’s glaciers run directly into the ocean, plunging into warmer, saltier water beneath the surface that’s melting them from below. NASA Jet Propulsion Laboratory/Caltech

But the exact mechanisms for this process remain poorly understood, Willis says. Scientists with the OMG project measure the heights of glaciers each year using airborne radar. They also torpedo sensors into the surrounding ocean to record temperature and salinity. In the interactions between the glacial ice and ocean water, the scientists are looking for signs of a runaway melting process similar to what has been feared in western Antarctica, where climate models suggest rapid melting could contribute to more than three feet of sea level rise by 2100.

Beyond sea level rise, scientists worry that an influx of cold freshwater from Greenland’s melting ice could itself alter the climate, bringing changes to the Atlantic currents that regulate the weather conditions of surrounding landmasses. Some regions could see an uptick in extreme weather, Willis says, while others could see extra sea level rise. But we’re unlikely to know the precise effects until we observe them happening.

But for all the gloomy uncertainty, Willis says he tries to remain optimistic about the future of Greenland’s ice. Though some melting and sea level rise is inevitable, there’s still time to avoid the biggest consequences, he says. “The question is, do you want to get hit in the head with a pingpong ball or a bowling ball?”