It’s been the subject of protests and debates, but if anything is improving in Flint, Michigan, it’s hard for any of us on the ground to see.

One of the city’s lead pipes has been replaced for the benefit of the press, but more than 8,000 additional service lines are likely corroded and still leaching toxic lead. It took a mom, a pediatrician, and a professor in Virginia to discover Flint’s children were being poisoned. It took cable television to get the nation to give a damn. 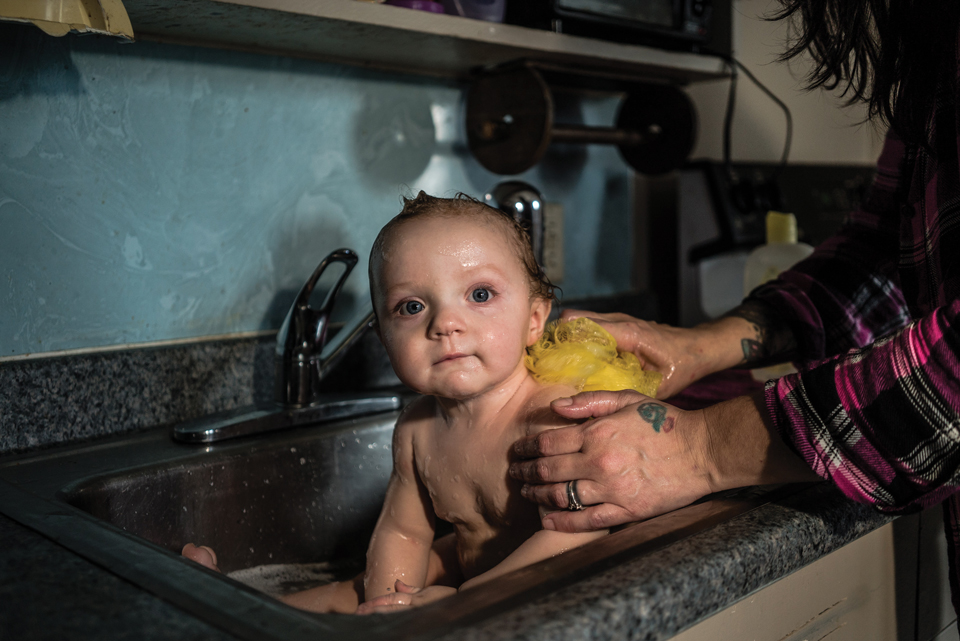 And that’s not all. An outbreak of Legionnaires’ disease has killed at least 9 people and infected 87 others over the last two years. The state knew. The city knew. The county knew. The federal government knew. But the public was never told. Legionella bacteria may still be in pipes and hot-water heaters, waiting for warm weather to spawn. People are frightened in this hardscrabble town of 99,000 about an hour’s drive north of Detroit. And still, the government tells them nothing.

The county health director won’t come to his door.

The mayor is busy in a meeting with Jada Pinkett Smith.

Republican Gov. Rick Snyder gives interviews assuring citizens that the water is now safe for washing and tells me he would bathe his own grandchildren in it. The governor has no grandchildren. 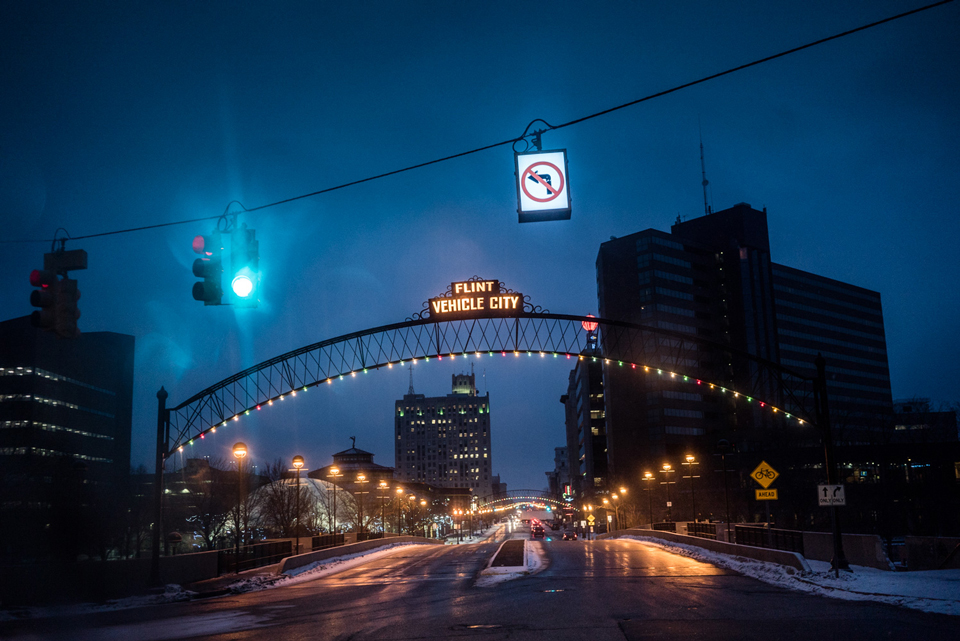 The iconic Vehicle City sign hangs over the entrance to downtown Flint. 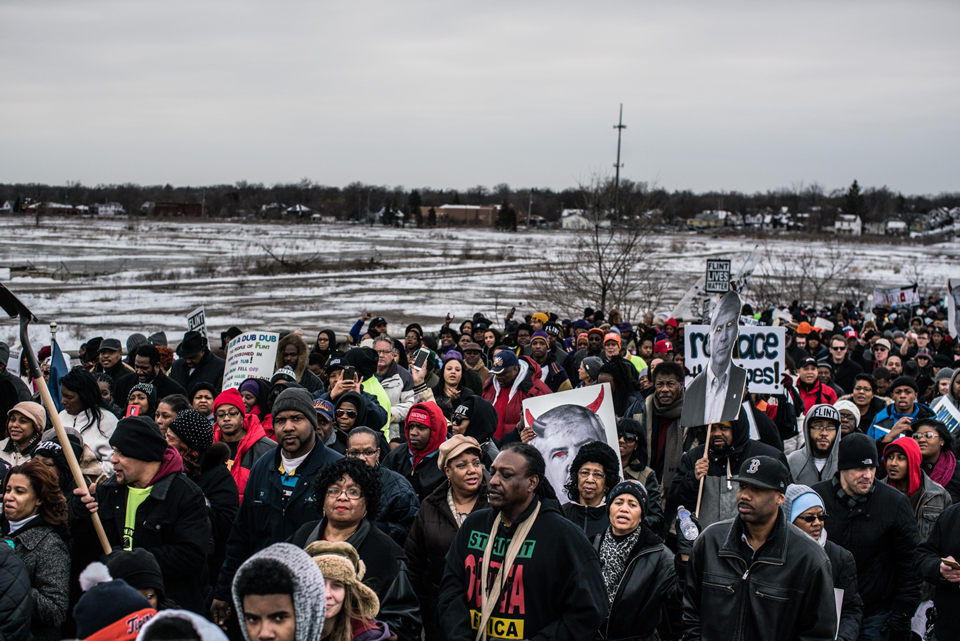 On February 19, the Rev. Jesse Jackson led more than 500 people past abandoned General Motors plants to the Flint water tower in protest of the water crisis in Flint.

That irony is not lost on Sabrina Hernandez, a 39-year-old bartender who is helping raise her one-year-old granddaughter, Hazel. In January, state health inspectors came to the downtown bar where Hernandez works and instructed staff not to serve ice cubes or rinse lettuce with city water. Hazel, on the other hand? Well, go right ahead and rinse her off, the governor declares.

“It’s like living in a Third World country,” Hernandez says. “What are they going to do to us next? It makes you think, was this because we are poor?” 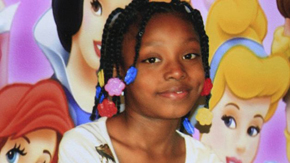 A nighttime raid. A reality TV crew. A sleeping seven-year-old. What one tragedy in Detroit can teach us about the unraveling of America’s middle class.

It would be easy to blame Snyder for this man-made catastrophe. And he does deserve much of the blame. Flint is the consequence of his bookish managerial style, his insistence on “relentless positive action.” And it was Snyder who stripped Flint’s mayor and City Council of power and replaced them with a string of emergency managers who had absolute authority over Flint’s finances and political decisions. It was Snyder’s emergency manager who, in a cost-saving measure, decided to go off the Detroit water system and pipe in water from the notoriously polluted Flint River instead.

Snyder knew the water was bad. Everybody knew the water was bad. E. coli and boil notices and mysterious rashes were immediately the stuff of headlines. Michigan officials began secretly trucking in water for a state building in Flint. The water from the Flint River was so corrosive that General Motors workers noticed it rusted their parts. After six months, GM switched its plant back to using Detroit water.

The Flint City Council soon voted to do the same, but the vote was ceremonial. The City Council had no real influence anymore. Jerry Ambrose—Flint’s fourth emergency manager in less than four years—vetoed the resolution, calling it financially “incomprehensible.” 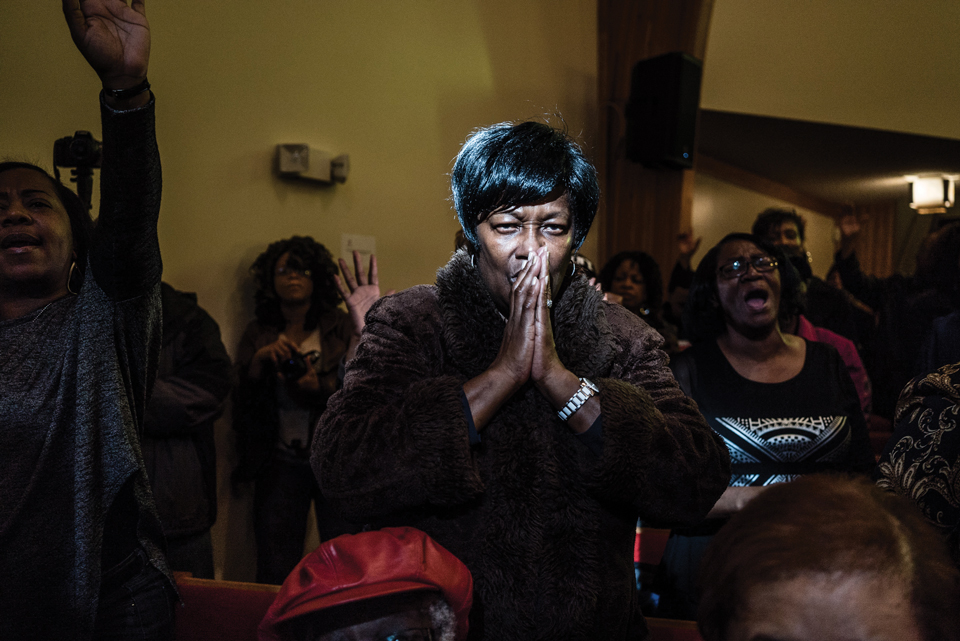 Flint residents at an environmental rally at the First Trinity Missionary Baptist Church. Also in attendance was hip-hop mogul Russell Simmons, one of many celebrities to visit the city after its water crisis made headlines. 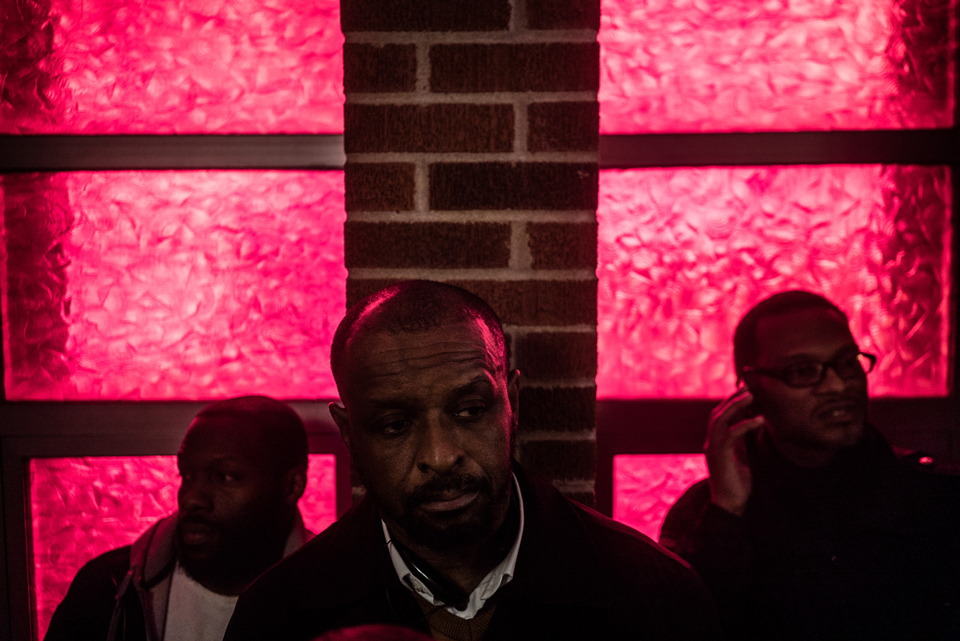 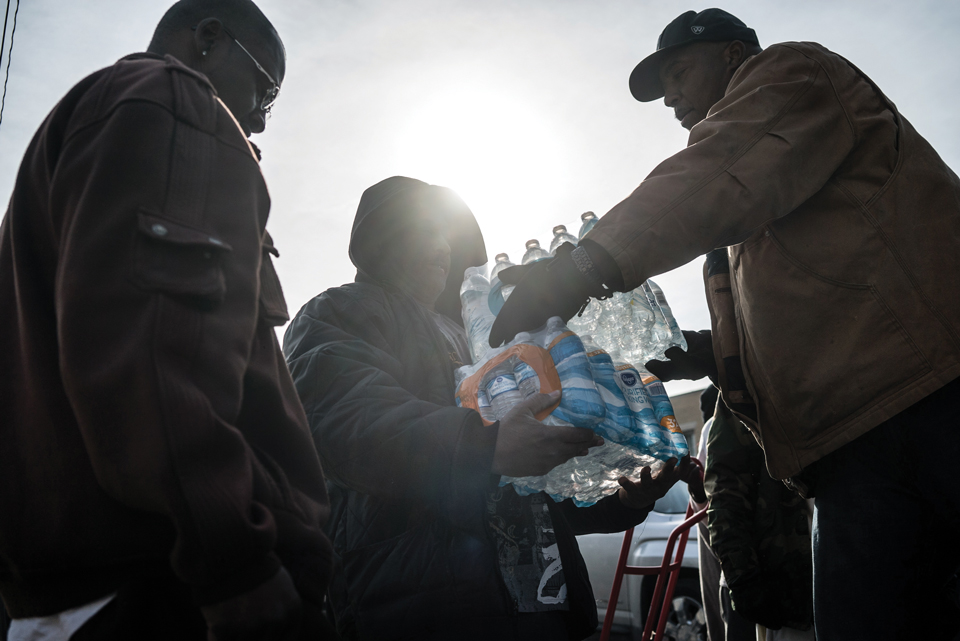 In fairness, Flint has a long history of being financially incomprehensible. In 2002, hollowed out by three decades of industrial decline, Flint had a $30 million operating deficit. The mayor was recalled and an emergency financial manager was installed. Even though power was returned to elected officials, the books were never balanced and the city routinely blew multimillion-dollar holes in its budget. The new mayor, accused of bribery and lying about the city’s finances, resigned for “health reasons.” Enter Snyder and his band of bean counters.

All the while, Detroit’s water utility was fleecing Flint, charging one of the poorest cities in the United States an average of $910 a year per household, nearly three times the national average. It is worth remembering that former Detroit Mayor Kwame Kilpatrick was sentenced to 28 years in federal prison for, among other things, bid-rigging in the water department. 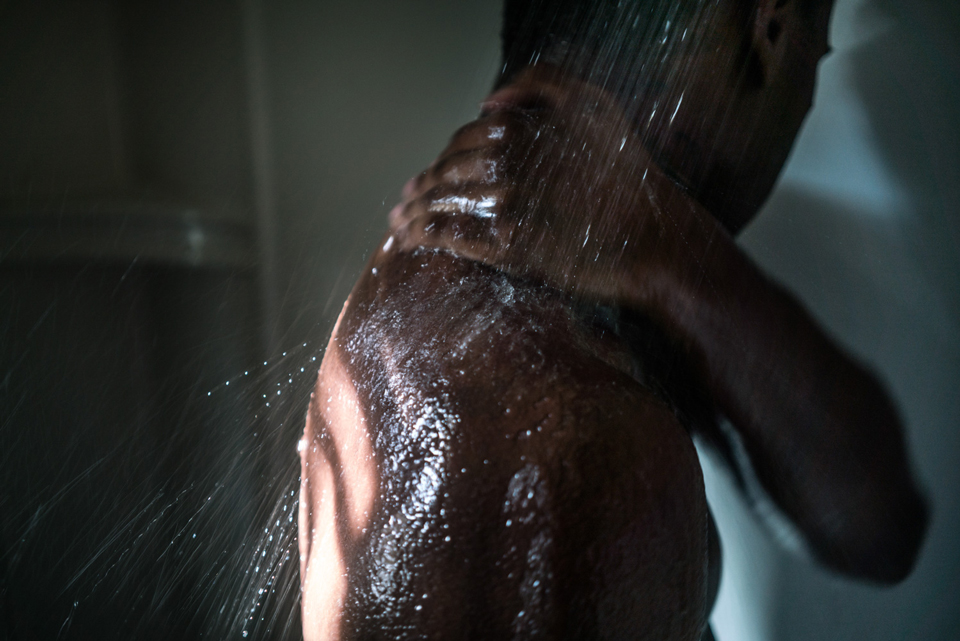 Dusable Lewis, 18, showers in his house in northern Flint. Dusable lives with his mom and his son Dusable Jr., who is less than a year old. Until last month, the baby and his mother had been drinking the Flint water.

So in 2013, Flint’s civic leaders pushed for the construction of their own water system running parallel to Detroit’s. It wasn’t necessary; Detroit’s water was perfectly fine, if overpriced. But think of the jobs. Think of the money. The chamber of commerce wanted it. The trade unions wanted it. The contractors wanted it. The Democratic City Council rubber-stamped it. So did the Democratic mayor. And so, the Republican governor’s people signed off on the new multimillion-dollar water system even though Vehicle City was broke.

How would Flint pay for this redundant infrastructure when it had no money? Simple, borrow the money from Hazel’s future. Then raise her grandmother’s water bill—charging even more for the substandard Flint River water than for the Detroit water.

The savings to the city would be funneled back into upgrading Flint’s mothballed water treatment plant as well as provide a revenue stream toward the new water system. Just one problem—the necessary upgrades weren’t made to the old plant before people were served water from a river known as a dumping ground for corpses and car batteries.

After 18 months of denials from Snyder’s bureaucrats, Flint went back on Detroit’s water system in October last year. Hazel’s grandmother is still being overcharged. Of course she is: Those bond payments begin this year, and if Flint defaults it could create another financial emergency, and the city might once again go back into the hands of a Snyder-appointed emergency manager. Last week, Michigan Attorney General Bill Schuette indicted three mid-level managers for covering up the extent of the problem, and Synder promised to drink the water for a month to assuage fears. But public trust is already corroded. 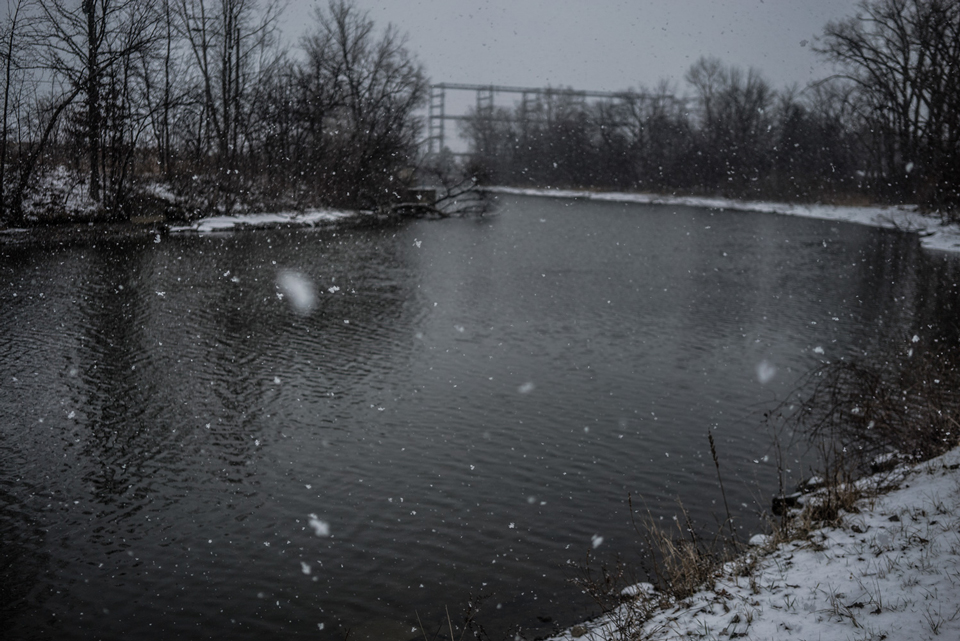 The Flint River during a snowstorm. Many of the residents I spoke with couldn’t believe that the Flint River was even considered a source of water. It‘s long had a reputation as a place to abandon cars, dead bodies, and pollutants. 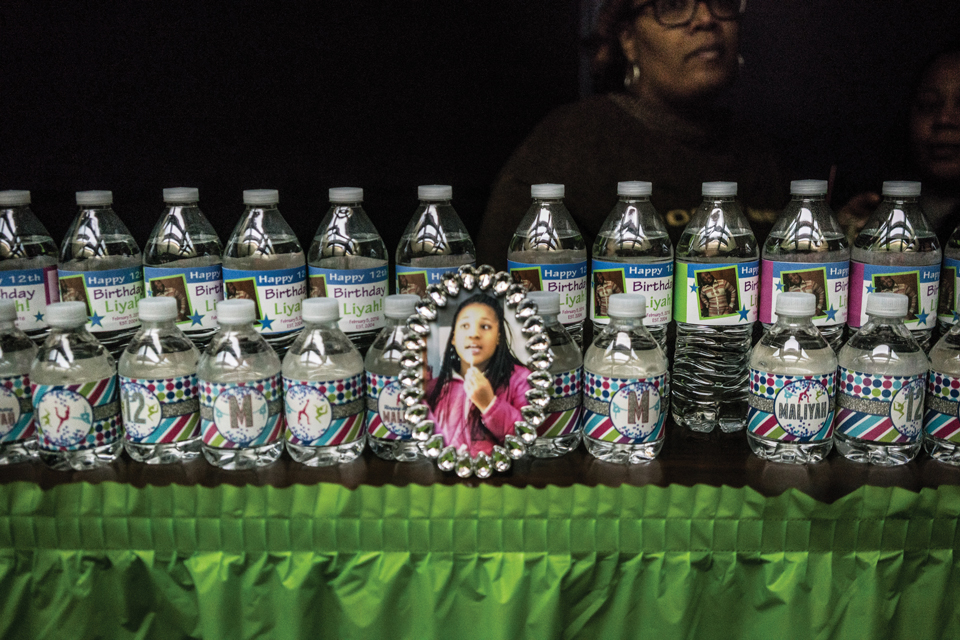 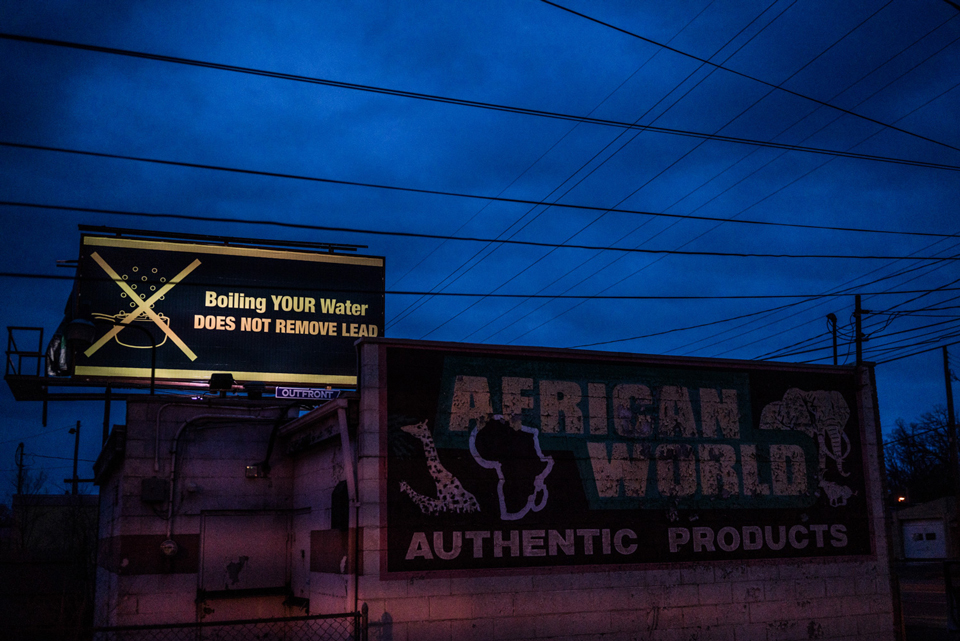 Police lights illuminate a sign warning residents that boiling water does not remove lead. These billboards can be found all over Flint.

Flint’s water crisis has become a symbol that resonates across America—but a symbol of what? Of working­-class decline? Disregard for a majority-black population? Bloated government? The push to cut and privatize public services? Even as Flint became front-page news and federal water safety protocols were exposed to be laughable, the Obama administration proposed slashing a quarter of a billion dollars from the Environmental Protection Agency’s testing budget to help meet spending cuts imposed by Congress. Experts warn there are many other cities—Cleveland, Pittsburgh, and Newark, New Jersey, for instance—with water that is as bad or worse.

Is Flint an outlier or a harbinger of a Mad Max future of crumbling roads, joblessness, and poisoned water? One thing is for sure: The rage felt by the residents of Flint is little different from the rage felt in other quarters of America—the feeling that you’re losing ground, that the deck is stacked against you and the people on top don’t give a damn.

“I don’t want to sound like a conspiracy theorist or anything,” Hernandez says. “But it makes me wonder if it’s not intentional. This community, we don’t have a voice. Nobody listens to the poor people that are, you know, barely making it.”

Update: Canepari, along with co-directors Jessica Dimmock and Drea Cooper, now have an eight-part documentary on Netflix, which follows the Flint police department over a two-year period. The series, Flint Town, digs into issues the city faces beyond the water crisis.