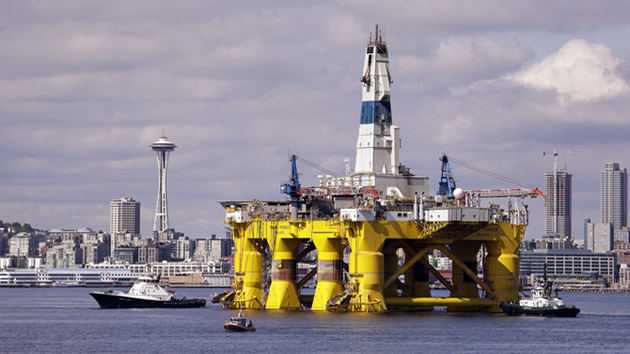 A shell oil rig off the coast of Seattle in May 2015, on its way to the Arctic.Elaine Thompson/AP

The Obama administration is expected to put virtually all of the Arctic and much of the Atlantic off limits for oil and gas drilling until 2022 in a decision that could be announced as early as Tuesday.

The decision reverses Barack Obama’s move just last year to open up a vast swathe of the Atlantic coast to drilling—and consolidates the president’s efforts to protect the Arctic and fight climate change during his final months in the White House.

The five-year drilling plan, which will be formally announced by the interior department, was expected to block immediate prospects of hunting for oil in the Arctic, according to those familiar with the proposals.

The move was widely anticipated after Obama and Justin Trudeau, the Canadian prime minister, declared last week they would follow “science-based standards” when it came to sanctioning new oil and gas drilling in the Arctic.

But the plan was also expected to seal off large areas of the Atlantic coast from future exploration, following protests from coastal communities in the Carolinas and Georgia—and that could cause reverberations in the presidential elections.

Shell, ExxonMobil and Chevron have been pushing heavily to reopen drilling off the Atlantic coast, and Republicans and some state governors were also in favor.

Obama had been inclined to agree. But after protests from dozens of coastal tourist towns, which feared a repeat of BP’s oil disaster in the Gulf of Mexico, and opposition to drilling from the Democratic presidential contenders Hillary Clinton and Bernie Sanders, Georgia and the Carolinas were expected to remain closed to future drilling, sources familiar with the plans said.

The administration was still expected to allow oil and gas leases off the coast of Virginia, where Terry McAuliffe, the Democratic governor, has been in favor of offshore oil.

Under an earlier draft of the proposal the interior department would offer the first Atlantic leases in 2021. The first exploratory drilling could take place within three to five years. If the companies did make a discovery it would take about a decade to move to oil and gas production.

At this point the plans remain a blueprint. Further areas off the Atlantic could be put out of bounds for oil leasing before the program is finalized later this year.

And Obama has given a number of indications in the last six months that he is becoming more responsive to campaigners’ arguments that if he is serious about fighting climate change he must stop the extraction of coal, oil, and gas—not just put curbs on emissions.

Obama and Trudeau took a big step towards protecting the Arctic last week, declaring that any future oil and gas exploration in the polar region “must align with science-based standards between the two nations that ensure appropriate preparation for operating in Arctic conditions, including robust and effective well control and emergency response measures.”

The strictures against future Arctic drilling are unlikely to inflict an immediate political toll on Obama. Oil companies have grown more reluctant to invest the huge sums required to operate off the north coast of Alaska, given current low prices and the disappointing results that led Shell to give up on its exploratory well in the region.