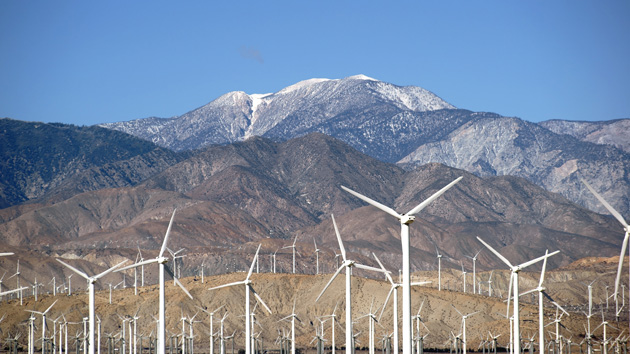 This story was originally published in Wired and is reproduced here as part of the Climate Desk collaboration.

Let’s talk about climate change, for once without politics. Instead, money.

That’s right. Forget the red and blue, the heated tempers and rising rhetoric. Instead think about the coal factories that still power much of the country, and who pays for every pound of carbon they add to the atmosphere. Right now, your state is making bets on its future economy, by choosing whether or not to change those factories by acting preemptively on a contested emissions rule.

“All the know-how and infrastructure are going to flow from states that got in early to those that stayed behind.”

That rule is the Clean Power Plan, which is currently locked up in a Washington, DC, circuit court pending legal review. The rules were set to go into effect in June, which would have required every state to submit their plans to cut emissions to the EPA by September 2016, or by September 2018 with an extension. Last month, though, the Supreme Court decreed that states would not be obligated to comply with the rule until it wins in court. And if it loses, never.

Nineteen states have suspended their plans. Nineteen others are proceeding as though the EPA rule is a go. The rest are either assessing or exempt.

The logic here is pretty simple. “If your state produces carbon to make energy, it won’t be beneficial for your state to have a policy that does not use those inputs,” says Mark Jacobsen, an energy economist at the University of California-San Diego. Conversely, your state is probably inclined to comply if it has abundant solar, wind, or hydroelectric potential.

And let’s say your state happens to have all that stuff, and decides to shrug away the Supreme Court’s stay and move forward with a plan to curb emissions. If the Clean Power Plan passes, your state’s coal-chugging neighbors will be legally obliged to figure out another way to keep the lights on, and your state will be years ahead in terms of infrastructure, expertise, and technology. “All the know-how and infrastructure are going to flow from states that got in early to those that stayed behind,” says Jacobsen. Energy, too. States that did not comply will have to jack up energy costs to drive down demand, or else buy greener energy from across state lines.

That last bit is important. States buy and sell energy to each other all the time. Under the Clean Power Plan, states are left to their own devices to meet emissions targets set up by the EPA. “The policy that one state adopts has implications for its neighbors, and there can be a first mover advantage,” says Jonathan Hughes, an economist at the University of Colorado-Boulder who has co-authored research on the Clean Power Plan’s state line economics.

View from the Top

Here’s the view from 30,000 feet. States have two options for complying with the EPA’s plan. The first—favored by the agency—is called a rate-based system. The state puts a price on pounds of carbon emitted per megawatt hour. Rate-based systems tend to manifest as carbon taxes and subsidies (to cleaner energy sources) paid by power plants themselves. Electricity costs are less likely to trickle down to consumers. Alternately, a state could convert those EPA-determined rate-based goals into a mass-based system, in which regulators set a statewide emissions goal and require power companies to buy portions of what they hope to emit. Power companies are buying and selling energy, and consumers are more likely to feel the pinch.

“When the states have different regulations, Nevada can export its surplus ‘clean power’ to California and get those wholesale California prices.”

States can be strategic about which system they want to use, based on what their neighbors do. Like California and Nevada, for instance. California’s cap and trade is a mass-based system—which generally means higher wholesale costs for energy consumers. Let’s say they adapt the same system to comply with the Clean Power Plan. If Nevada wants to be strategic, it could set up a rate-based system. Normally, this would piss off the energy industry, because it would increase the cost of doing business. But California purchases a lot of power from other states. “When the states have different regulations, Nevada can export its surplus ‘clean power’ to California and get those wholesale California prices,” says Hughes. Thus, Nevada gets the dual advantage of relatively low costs to consumers, and being able to export energy to California at a higher profit. Then again, hydropowered Oregon or sunny Arizona could always undercut the Silver State.

Needless to say, all this regulatory strategery gets tricky fast. But Hughes says the first movers could have an advantage, leaving their slower neighbors with fewer options if the EPA’s rule passes the court. If the situation gets messy enough, the differences in state-by-state regulation could lead to loopholes where states with high carbon ceilings are routinely sating their dirtier neighbors’ thirsts for power. In this case, the Clean Power Plan might have no net affect, or even lead to higher emissions than what the EPA is predicting in the Clean Power Plan, says Hughes.

Of course, cost-benefit analyses are not the only things prompting various parties to choose sides over the Clean Power Plan. Politics as usual, of course. But money is what landed the EPA in court, after 157 states, businesses, and industry groups complained that meeting the EPA’s goals would be too much of a burden. Wherever your state stands, rest assured its policy makers are hoping their decision is the best bet for long term economic growth.