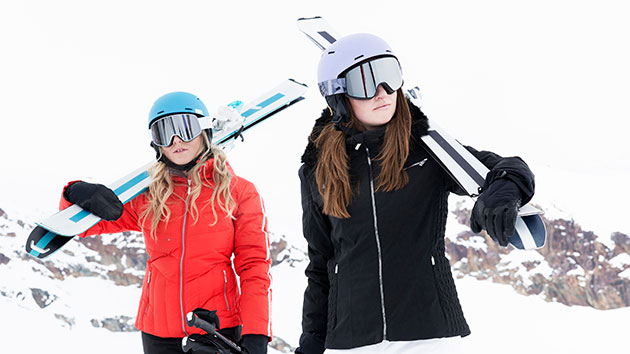 Ever since our early ancestors left the fertile sauna of Africa and headed North, we humans have been searching for ways to fend off sleet and snow and rain and cold. The Inuit once relied on seal and whale intestines to get the job done. Nowadays, we rely on waterproof synthetics.

These modern fabrics represent a certain kind of progress, but they also have a worrisome downside. Some of the fluorocarbon chemicals used in their manufacture are dangerous for our health, and are so stable that their residues will persist in the environment, quite literally, until the next Ice Age. What’s more, there’s no guarantee that the industry’s latest alternatives, which are marketed as safer, are much of an improvement.

PFOA, which has contaminated drinking water in many districts, may pose health risks at concentrations as low as one part per trillion.

To make their fabrics repel water—causing it to bead up and fall away rather than penetrate the material—most manufacturers rely on perfluorocarbons (PFCs), the same chemicals used to make nonstick cookware and cupcake wrappers. Some PFCs escape into the atmosphere and into wastewater during production—and small amounts can turn up as residue on the clothing itself.

PFCs have been around since the 1950s, but we didn’t know a lot about their effects until the early 2000s, when scientists began releasing data on PFC toxicity and their persistence in the environment. A particularly troublesome PFC is perfluorooctanoic acid, or PFOA, a suspected human carcinogen that has been linked to cancer, kidney damage, and reproductive problems in rats. It may also pose human health risks if it accumulates in drinking water at levels as miniscule as one part per trillion—the equivalent of less than one teaspoon in 1,000 Olympic swimming pools’ worth of water. One study also associated elevated exposure to PFCs, including PFOA, with weakened immune responses in children.

The makers of PFCs have been the subject of several blockbuster exposés—PFOA most recently made headlines as the culprit poisoning residents of Parkersberg, West Virginia. These compounds have a very long biological half-life—specifically, it takes our bodies more than four years to flush out half of the PFCs currently residing in our tissues. As such, the US Environmental Protection Agency warns that “it can reasonably be anticipated that continued exposure could increase body burdens to levels that would result in adverse outcomes.”

Because PFOA and its precursors virtually never go away, they accumulate in nature and eventually find their way back to us. Researchers have found the chemical in remote parts of the Arctic, in soil and dust, in fish and meat, in human tissue, and in drinking water throughout the United States. (To find out if your county’s water has tested positive for the chemical, see this map).

In 2006, the EPA asked major chemical manufacturers, including DuPont and 3M, to set a goal of eliminating PFOA and its precursors from both emissions and products by January 31, 2015—their final reports are due by the end of this month. The European Union has also proposed restrictions on the substance. So problem solved, right? You no longer need to fret about the chemicals used to make your sweet new neon ski parka?

Well, not exactly. There are reasons to stay worried. For one, the EPA’s phaseout program was voluntary, and it includes no mandate that clothing manufacturers must also remove PFCs from their supply chains. (The EPA does say it is working on a rule that would require clothing companies that import fabrics made with PFOA to subject themselves to the agency’s review.) Greenpeace tested 40 pieces of outdoor clothing and gear it had purchased in late 2015 and reported that PFOA is “still widely present” in name-brand products, including items from the North Face, Patagonia, and Mammut.

Patagonia calls Greenpeace’s assessment “not accurate” and says it has mostly phased out PFOA. Mammut says it has eliminated the chemical entirely—as does North Face, starting with its spring 2015 line. Some of the products Greenpeace tested may have been manufactured before phaseout efforts were complete.

Most of the sportswear manufacturers have replaced PFOA, which has an eight-carbon backbone, with six-carbon (C6) PFCs. Mammut, for example, says it is provisionally using a “responsible” and “PFOA-free” C6 chemistry, while Marmot, another outdoor clothing brand, argues that C6 “is the safest alternative for the environment.”

It’s true that these shorter PFCs don’t remain in our bodies as long as PFOA does. Still, “the C6 chemicals don’t seem to be the magic coating for your clothing that you’re looking for,” says Environmental Working Group senior scientist David Andrews. Like PFOA, the shorter compounds persist in the environment, which is one reason why Greenpeace, EWG, and plenty of other scientists around the globe don’t consider them safe alternatives. In addition, as Patagonia explains, “the shorter-chain structure also tends to perform less effectively in repellency tests,” which means a larger quantity may be needed to achieve the same result.

“We should probably have more oversight into this whole class of chemicals…It took decades to show how bad PFOA is.”

Manufacturers in the United States are not required to test chemicals for safety before using them in products, and the health effects of the shorter-chain PFCs are as yet a mystery. But “the short-chain chemicals show a lot of the same characteristics as their longer predecessors,” EWG’s Andrews told me.

Indeed, as a class, PFCs raise all sorts of red flags. In 2014, 200 scientists from around the world signed the “Madrid Statement,” a document calling for more research on PFC toxicology and urging governments around the world to restrict their use for nonessential purposes. “We should probably have more oversight into this whole class of chemicals,” Andrews says. “It took decades to show how bad PFOA is.”

Outdoor clothing makers acknowledge these concerns—”it may be preferable to search for fluorocarbon-free water repellent as a long term solution,” notes Patagonia—but they insist their hands are tied. The North Face’s “chemical responsibility” web page assures that the company hopes to phase out “fluorinated DWR” (that’s durable water repellent) by 2020, but notes that “short-chain DWR is currently the best available viable alternative.”

Several clothing companies say the durability of their products—made possible by PFC chemistry—is key to their environmental friendliness. As Patagonia’s spokesman put it, “abandoning PFCs and moving to currently available alternatives would have an even greater negative impact on the environment because the lifespan of our gear would be greatly reduced, requiring replacement far more quickly, which of course carries significant costs—carbon emissions, water usage, waste output, bigger landfills, and more.” He added that the company is still committed to finding an alternative, and that it has partnered with a Swiss firm working at the “cutting edge of chemical treatments that don’t harm the planet.”

There is at least one safer option currently floating around. A company called Nikwax sells a PFC-free waterproofing product akin to the rubber in the soles of your shoes: You cover your jacket with the Nikwax gel, toss it in the wash, and presto—it’s coated with a network of elastic water-repellent molecules. The problem is that Nikwax is a direct-to-consumer product, meant to go on the jacket you’ve already bought. In that sense, it doesn’t help solve the PFC conundrum.

But that could change. In January, Páramo, a small British brand partnering with Nikwax, became the first company in the outdoor industry to completely eliminate PFCs from its manufacturing process. Italian climber David Bacci wore Páramo’s threads as he scaled the Patagonian peaks Fitz Roy and Cerro Torres, and he wrote that the clothing “worked perfectly” and kept him “dry and warm in extreme conditions.”

Nikwax North America president Rick Meade says he thinks the publicity around fluorinated chemicals will lead to some “dramatic shifts of interests to consumers in the next one to three years.” For now, until more clothing companies commit to ditching PFCs, your snow outfit will most likely be made with a PFOA cousin that’s coated in mystery.