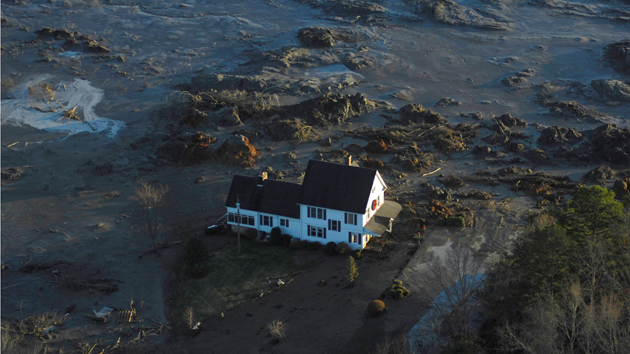 Earlier this month, Esther Calhoun stood before the US Commission on Civil Rights in Washington, DC, describing some of the unlikely ailments that have been plaguing her and her neighbors these past few years. “I am only 51 years old and I have neuropathy,” she said. “The neurologist said that it may be caused by lead, and it is not going to get better.”

This is not a story about contaminated water in Flint, Michigan. Calhoun, who lives in Uniontown, Alabama, was talking about coal ash—a toxic byproduct of burning coal that has quietly become one of America’s worst environmental justice problems. The ashes are often laden with arsenic, lead, mercury, and other toxins, and multiple studies have found that the waste tends to be stored in low-income, minority communities. In Uniontown, where 90 percent of residents are black and about half live below the poverty line, a coal ash landfill sits “directly across the street from peoples’ homes, and from yards in which their kids play,” says Marianne Engelman-Lado, an attorney with the environmental nonprofit Earthjustice.

Coal is slowly on the way out in the United States, but our existing coal-fired power plants still generate roughly 130 million tons of coal ash each year. That’s more than 800 pounds for every man, woman, and child in America. The regulations on disposal of coal ash are weak, to say the least, making the experiences of Calhoun and her neighbors far from unique. Here’s a quick primer to get you up to date on an environmental nightmare that shows no signs of going away.

Wait, wasn’t there some big coal ash disaster fairly recently? Yep. Coal ash made national headlines in December 2008, when a dam at the TVA Kingston Fossil Plant in Tennessee ruptured, releasing more than 1 billion gallons of toxic coal ash slurry onto the surrounding 300 acres. A wave of sludge destroyed homes, inundated ponds and streams, and formed “ash bergs”—heaps that floated down the nearby Emory River. Tests of local waterways after the breach turned up arsenic, a human carcinogen, at 149 times the level deemed safe for drinking water. Four million tons of ash were recovered and carted to a landfill in Uniontown, where Calhoun lives. There have been other recent spills, too, including a 2011 breach that contaminated Lake Michigan and a 2013 spill into North Carolina’s Dan River. 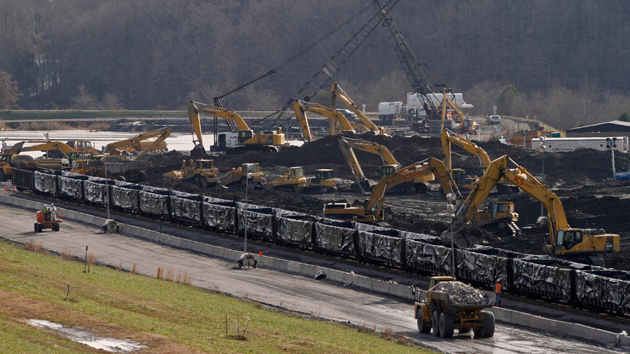 Coal ash from the Kingston Fossil Plant spill is loaded onto train cars. Four million tons of it were hauled to Uniontown, Alabama. Wade Payne/AP

What is coal ash like? It includes “fly ash”—powdery particles that easily become airborne—along with coarser, sludgy material that sinks to the bottom of coal furnaces. The ash is sometimes dumped in uncovered landfills, which allows the lighter particles to blow over residential areas in the vicinity. Sometimes it’s used for “beneficiary” purposes: mixed into topsoil or employed as a structural fill during construction projects. In other cases, it’s mixed with water and stored in unlined pits, or “ponds,” from which toxins can get into the groundwater. “Due to the mobility of these metals and the large size of a typical disposal unit, metals, especially arsenic, may leach at levels of potential concern,” Barry Breen, a representative from the Environmental Protection Agency, told members of Congress in 2009. According to the agency’s data, residents living near a disposal site have as much as a 1 in 50 chance of developing cancer from drinking arsenic-contaminated water. 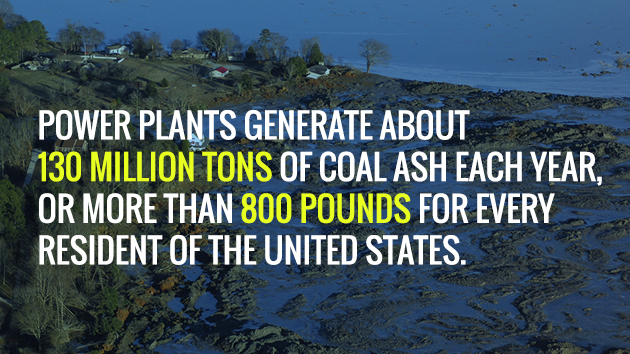 What has the EPA done about all of this? Not a whole lot. In fact, coal ash was used in the construction of the Ronald Reagan Building in Washington, DC, which houses the EPA. Six years after the massive Tennessee spill, the agency adopted rules stipulating how the waste should be handled. But states aren’t required to adopt those rules. According to a 2014  joint report by Earthjustice and Physicians for Social Responsibility, “some states allow coal ash to be used as structural fill, agricultural soil additive, top layer on unpaved roads, fill for abandoned mines, spread on snowy roads, and even as cinders on school running tracks.”

Is my neighborhood contaminated? There are more than 1,000 active ash landfills and ponds around the country, not to mention hundreds of “retired” sites and about 200 locations where spills are known to have contaminated the surrounding water and air. The EPA has found that low-income, minority communities are disproportionately affected—1.5 million people of color live within the catchment zone of a coal ash storage facility. Earthjustice created the map of contamination sites below, with the caveat that the sites it depicts are “likely to be only a small percentage of the nation’s coal-ash-contaminated sites in the United States. Most coal ash landfills and ponds do not conduct monitoring, so the majority of water contamination goes undetected.” (This map is best viewed on a computer, not a mobile device.)

Is there a solution? “This is a relatively easy problem to solve,” notes Lisa Evans, a senior lawyer for Earthjustice. “We’ve always known how to dispose of coal ash.” The tried-and-true EPA method consists of placing the dry ash into an enclosed, secure (lined) landfill so that it can’t leach into the soil or escape into the air. Of course, this costs more than simply dumping the stuff into open ponds or landfills next to the power plant, particularly since it sometimes involves moving the coal ash to hazardous waste facilities off-site. But the human cost of improper disposal is far greater. As Evans puts it, “You have a lot of people hurt, and a lot of environmental damage for pennies on the dollar.”