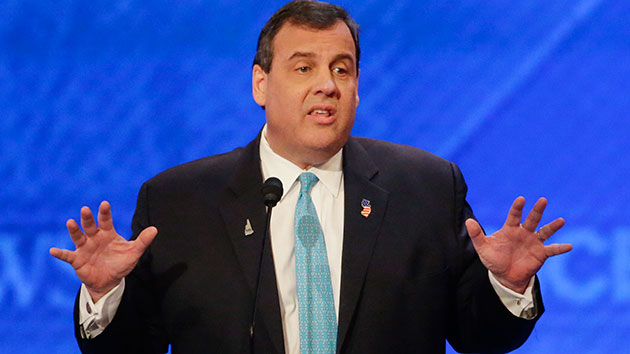 During Saturday night’s Republican primary debate, New Jersey Gov. Chris Christie said he would use quarantines to prevent the Zika virus outbreak from spreading in the United States. From a Washington Post transcript:

MARTHA RADDATZ (ABC MODERATOR): Governor Christie, at the peak of the Ebola outbreak in west Africa, you ordered an American nurse who landed at Newark Airport be detained and quarantined. As fear spreads now of the Zika virus and with the Rio Olympics just months away, is there a scenario where you would quarantine people traveling back from Brazil to prevent the spread in the United States?

CHRISTIE: You bet I would. And the fact is that because I took strong action to make sure that anyone who was showing symptoms—remember what happened with that nurse. She was showing symptoms and coming back from a place that had the Ebola virus active and she had been treating patients. This was not just some—like, we picked up her just for the heck of it, alright?

We did it because she was showing symptoms, and the fact is that’s the way we should make these decision. You make these decisions based upon the symptoms, the medicine, and the law. We quarantined her, she turned out to test negative ultimately after 48 hours, and we released her back to the State of Maine.

That position might make for a tough-sounding talking point during a debate. But it’s totally pointless as a matter of public health, experts said.

“Zika is rarely, if ever, spread from person to person, so quarantining infected people will do nothing to stem a Zika outbreak,” said Laurie Garret, a global health expert at the Council on Foreign Relations.

“Quarantining infected people will do nothing to stem a Zika outbreak.”

Zika, a mosquito-borne virus, has spread to more than 1 million people throughout Latin America. The symptoms of the virus itself are usually mild or nonexistent. But it could be dangerous for pregnant women: Zika has been tentatively linked to a spike in cases of microcephaly, a birth defect in which infants are born with small heads and can have incomplete brain development.

Dean Blumberg, chief of pediatric infectious diseases at the University of California-Davis Children’s Hospital, agreed that a quarantine wouldn’t be much help in controlling an outbreak. “The vast majority of transmissions are from mosquito bites, and most of the country doesn’t have the [Zika-carrying Aedes aegypti] mosquito in high concentrations,” he said. “So I don’t think [a quarantine] is necessary or would be beneficial in any way.”

CARSON: Do we quarantine people? If we have evidence that they are infected, and that there is evidence that that infection can spread by something that they’re doing, yes. But, just willy-nilly going out and quarantining a bunch of people because they’ve been to Brazil, I don’t believe that that’s going to work. What we really need to be thinking about is how do we get this disease under control?

Christie received substantial criticism for his response to 2014’s Ebola outbreak. He ordered the quarantine of a nurse, Kaci Hickox, after she returned from fighting Ebola in Sierra Leone. Last October, Hickox filed a lawsuit against Christie for false imprisonment and other claims, arguing that she had not, in fact, exhibited any symptoms indicative of Ebola when she landed at New Jersey’s Newark airport. Ultimately, she did not end up having the virus. That legal case is ongoing.

“The merits of Christie’s actions in the Hickox case will no doubt be decided in court, probably long after he has withdrawn from the presidential race,” Garret said. “But his Zika comments can be addressed immediately.”

Garret added that Christie didn’t quarantine a woman who was New Jersey’s first confirmed Zika case, identified in late January while visiting the state from Colombia.

Elizabeth Talbot, an epidemiologist at Dartmouth College’s School of Medicine, said a more effective solution is to focus on controlling and eradicating the mosquitoes that can carry Zika.

“Our public health energies are best invested in providing education about preventing bites and prioritizing the protection of pregnant women by advising them to postpone travel to affected regions whenever possible,” she said in an email. “The CDC is also recommending that meticulous attention be given to protect persons from mosquito bites if they are identified with Zika in the US following travel. This is so that our Aedes aegypti mosquitoes in the southernmost US do not become infected with Zika and transmit Zika disease in the US. Preventing mosquito bites for ill patients is not the same thing as quarantine, which can be an inflammatory or even scary word.”