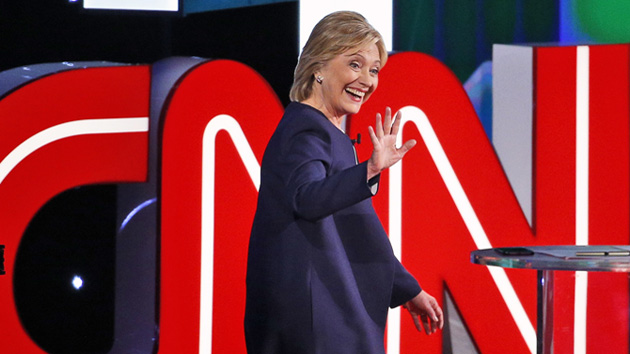 During the past two presidential campaigns, environmentalists cheered at the mere mention of climate change. Today, the urgency of the issue—where decades of inaction by world leaders has combined with steadily increasing extreme weather to produce an obvious threat to humanity—is undeniable. And throughout Tuesday night’s debate, it was clear the tide has shifted.

The five candidates onstage were practically begging to talk about climate change. Four of them mentioned the issue in their opening statements, and at one point, Bernie Sanders said, “This is a moral issue…The future of the planet is at stake.”

Clinton staked her climate record on what’s widely perceived to be one of the biggest diplomatic failures in recent history.

The boldest proposal came from former Maryland Gov. Martin O’Malley, who said his first action if elected president would be to steer the country on a path toward 100 percent renewable energy by 2050. That may or may not even be possible, but at least it was forward-thinking.

And then there was Hillary Clinton. About midway through the debate, Clinton staked her climate record on what’s widely perceived to have been one of the biggest diplomatic failures in recent history—the Copenhagen climate summit in 2009. After years of anticipation, the meeting of world leaders ended in disarray, with Obama and his aides famously wandering around the convention center, looking for the leaders of China, India, Brazil, and other key nations. The toothless deal struck at the last minute was called a “grudging accord” by the New York Times the next day. Yes, Obama—and Clinton, then his secretary of state—were instrumental to that deal, but it’s hardly something Hillary should be proud of.

So it was pretty strange to hear her comments on Tuesday night. In her first answer on climate change, Clinton said, “I have been on the forefront of dealing with climate change starting in 2009 when President Obama and I crashed a meeting with the Chinese and got them to sign up to the first international agreement to combat climate change that they’d ever joined.”

In reality, the sour legacy of Copenhagen has haunted international climate negotiations ever since. It’s now widely believed that the United States never wanted a legally binding climate deal in Copenhagen at all—even though the Democrats controlled the Congress at the time and may have been able to successfully ratify the treaty—opting instead for a mostly empty pledge of billions of dollars in aid to developing nations. Among environmentalists, Clinton has retained only a mediocre reputation on climate change as a result.

Her Copenhagen comment wasn’t just a poor choice of wording, because she brought it up again later in the debate. Climate activists on Twitter weren’t psyched.

Is @HillaryClinton actually listing presiding over Copenhagen as a climate *accomplishment?* Is this real? #DemDebate

With all due respect Hillary Clinton has skirted environmental issues at every corner. Copenhagen was not a victory.

Clinton going back to 2009 climate change “victories” is hilarious for people who remember Copenhagen. #DemDebate

In her expanded version of the story, Clinton and Obama were roaming Copenhagen “literally…hunting for the Chinese.” Once they found them, she said, “We marched up, broke in, and said, ‘We’ve been looking all over for you. Let’s sit down and come up with what we need to do.'” That all sounds very Jason Bourne, but it’s not a good substitute for effective climate policy.