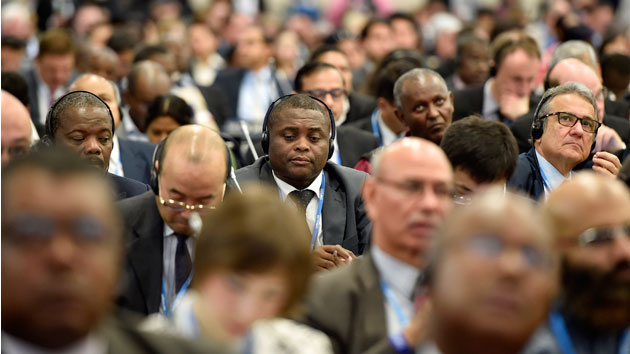 Delegates at the UN climate talks in Bonn, GermanyMartin Messner/AP

This story was first published by the Guardian and is reproduced here as part of the Climate Desk collaboration.

World leaders must step into the ongoing UN climate change negotiations, to remove roadblocks and ensure their negotiating teams can lay the groundwork for an agreement at landmark talk in December, an influential group of former leaders has urged.

The Elders—a group including former UN secretary general Kofi Annan, Graca Machel, the Mozambican politician and widow of Nelson Mandela, and Mary Robinson, formerly president of Ireland and a UN high commissioner—made their call on Friday, as the latest round of pre-Paris negotiations ended with many key issues left open. That stalemate leaves only five official negotiating days left before the Paris climate conference, at which governments are supposed to forge a new global climate change agreement to take effect from 2020.

“[This year] will conclude two of the most important international processes of our times [sustainable development goals, and a Paris agreement],” the group said, addressing heads of government. “You can prove to be a historic generation of leaders who will have a profound and positive impact that echoes through the century.”

World leaders are meeting late this month in New York, to discuss the UN’s proposed “sustainable development goals” aimed at lifting poor countries out of poverty and addressing social problems such as health and gender equity. But global warming is also likely to be high on their agenda, with time running out before a crunch climate conference in Paris this December.

At the climate negotiations in Bonn, the latest in a series of pre-Paris talks that have been taking place at intervals since 2012, countries worked on a new form of text for the proposed Paris agreement. In this, the basic text of a legal form of agreement is separated from ancillary sections containing some of the most controversial issues, including questions surrounding the provision of finance to developing countries.

The format is aimed at making the talks more manageable, as previous texts grew to scores of pages that were hard to prune, but the question of what should be in the core agreement has not yet been settled.

“The text needs to be consolidated and streamlined, to present negotiators with fewer options,” said Alden Meyer, director of strategy of the Union of Concerned Scientists.

There were signs of a possible compromise on the thorny issue of “loss and damage,” by which developing countries would receive assistance to help them cope with extreme weather events.

Progress has also been made in the tabling of emissions targets by leading developed and developing countries, most of which have now set out goals on reductions or curbs on emissions for the decade following 2020. But these are still regarded as falling short of scientific advice.

Some of the unresolved problems include what measures could be used to scale up countries’ emissions targets in the years between 2016 and 2020, when the new targets come into effect; how the preservation of forests should be treated under the text; how to review national targets to ensure they are fair and are monitored.

Some observers called on negotiators to continue their work outside the official negotiating sessions, the next—and final—week of which will be in October. Governments and the UN routinely hold informal meetings, in small and larger groups, to reach compromises on disagreements. This process could be supercharged when world leaders meet at the UN general assembly in New York this month, with opportunities for high-ranking officials to hold discussions on the fringes, as well as set-piece meetings of prime ministers and presidents.

There was frustration from some civil society representatives attending the Bonn talks, with some suggesting a breakdown in the Paris process was possible if more stringent demands are not met.

Harjeet Singh, climate policy manager at ActionAid, said he was “seriously concerned about the fragile progress,” saying that developing countries had been ignored. “The US and EU took baby steps towards agreeing to deal with climate damages for vulnerable countries, but insisted on leaving this out of the core agreement. Its exclusion will likely cripple a deal in Paris.”