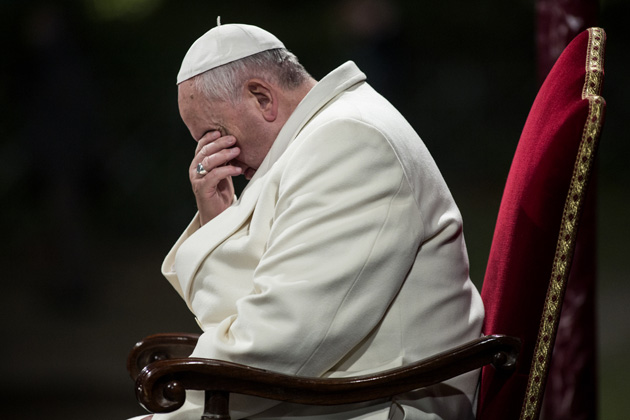 Liberals love nothing better than a religious figure who takes their side, and the media loves nothing more than the man-bites-dog story of a conservative force or figure staking out a progressive position. Consider all the hype given to pro-social justice evangelical Christians like Jim Wallis, or the statistically nonexistent “Creation Care” movement of green evangelicals.

So the Monday leak of Pope Francis’ forthcoming encyclical on climate change naturally triggered triumphant statements from green groups. In the draft, Francis says that climate change is mostly human-made, and that a failure to mitigate it would be an abrogation of our responsibility to protect God’s creation and have “grave consequences for all of us.”

He’s right, of course. But will it matter to the conservative political movements that stand in the way of taking climate action?

The Catholic Church is clear in its condemnation of the death penalty, but many Catholic GOP politicians still support it. Why should climate change be any different?

Some greens certainly think so. 350.org declared that it will “add momentum and moral weight” to the fossil-fuel divestment campaign. Rev. Fletcher Harper, executive director of GreenFaith, an interfaith environmental group, said in the same statement, “The pope’s encyclical will be a powerful game-changer.” Leading Senate climate hawk Sheldon Whitehouse (D-R.I.) told Grist, “I think it’ll have a really profound impact…Not only does it have the clout of an encyclical, but I think this very, very charismatic pope intends to drive the message.”

Unfortunately, there is little reason to believe that the pope’s position paper will alter the politics of the biggest, most problematic climate-polluting nations. None of the top four climate polluters–China, the US, India, and Russia–are majority Roman Catholic. Russia, India, and Japan have all sent worrying signals about their approach to the climate negotiations in Paris this fall. There is no reason to think the pope’s views matter to them at all. The European Union nations are heavily Catholic, but they are already committed to reducing emissions. The second-biggest emitter, the US, would therefore seem to be the most fertile ground for the pope to make inroads on the issue. The US is 24 percent Catholic, and Catholic voters are an important swing constituency for both major political parties.

But Democratic Catholics, like most Democrats, are already on-board to address climate change–just look at House minority leader Nancy Pelosi (D-Calif.) or Secretary of State John Kerry. The problem is the Republicans, regardless of their religion. Will the Pope’s words make any difference to them?

Liberals ought to think twice before wishing that American Catholics would take their political cues from the pope’s playbook.

No. Pope John Paul II strongly opposed the Iraq invasion, and every pope in recent memory has favored more spending on social programs for the needy. But Republicans, despite their efforts for the last half-century to win over Catholic voters, remained steadfast in their support of starting foreign wars and in their opposition to housing the homeless, caring for the sick, or feeding the hungry. As liberal Catholic pundit Bill Press notes, “In their encyclicals, popes have always talked about controversial issues of the day…perhaps most famously, Leo XIII in Rerum Novarum (1891) affirmed the right of workers to form labor unions and receive a living wage.” One hundred and twenty-four years later, Catholic Republicans remain opposed to labor unions or raising the minimum wage. The Catholic Church is clear in its condemnation of the death penalty, but Catholic GOP presidential contenders Rick Santorum, Jeb Bush, Bobby Jindal, and Chris Christie all support it. Why should climate change be any different?

Even before the encyclical was leaked, Republicans—both Catholic and Protestant—were dismissing it. The Guardian‘s Suzanne Goldenberg reported on Saturday:

“The pope ought to stay with his job, and we’ll stay with ours,” James Inhofe, the granddaddy of climate change deniers in the US Congress and chairman of the Senate environment and public works committee, said last week, after picking up an award at a climate sceptics’ conference.

Rick Santorum, a devout Catholic and a long-shot contender for the Republican nomination, told a Philadelphia radio station: “The church has gotten it wrong a few times on science, and I think we probably are better off leaving science to the scientists and focusing on what we’re good at, which is theology and morality.”

Goldenberg argues that being on the wrong side of the Catholic Church will cause tension within the GOP: “It also puts conservatives in an uncomfortable spot—not unlike the Reagan era of the 1980s when bishops came out against nuclear weapons.” That example, though, seems to prove the opposite point: The church’s anti-nuke stance didn’t slow Reagan’s vast nuclear buildup in the least, and the GOP remains less supportive of nuclear disarmament to this day. In April, the US Conference of Catholic Bishops (USCCB) announced its support for President Obama’s negotiations with Iran to avert it from developing nuclear weapons, something conservative congressional Catholic leaders such as Sen. Marco Rubio (R-Fla.) opposed.

And the USCCB isn’t as liberal as it was in the 1980s. As the New York Times reported on Saturday, most American Catholic bishops are skeptical of the pope’s embrace of action to reduce climate change:

Some [bishops] said they were wary about getting the church enmeshed in the debate over climate change, a contentious issue in the United States. They also expressed concern about allying with environmentalists, some of whom promote population control as a remedy, since the church sees abortion and contraception as great evils.

Some bishops said they had received hate mail from Catholics skeptical of climate change. Their wariness is one of many signs of the challenges Pope Francis faces with American Catholic leaders, who are more cautious and politically conservative than he seems to be on certain issues. Most in this current generation of bishops were appointed and shaped by Francis’ more conservative predecessors, Popes Benedict XVI and John Paul II.

Catholics have demonstrated that they hold diverse opinions and that they don’t take political marching orders from the Vatican.

Liberals ought to think twice before wishing that American Catholics would take their political cues from the pope’s playbook. Lots of Democratic Catholics disagree with their church’s doctrine on abortion and gay rights. Catholics have demonstrated that they hold diverse opinions and that they don’t take political marching orders from the Vatican. Catholic American politicians and voters pick and choose which Catholic teachings they apply to politics. The majority of American Catholics disagree with their church’s opposition to gay rights and contraception, and about half support abortion rights. Catholic Republicans oppose welfare and support warfare, in defiance of Church doctrine. Now we can add climate change to the list.

This actually ought to make enviros hopeful. Francis’s encyclical may help move American public opinion at the margins. (Imagine, for example, how much more widely available abortion might be if the Catholic Church did not oppose it.) But the more fundamental good news is that the politics of climate change aren’t subject to the whims of foreign clergy. Americans will make up their own minds about the issue—and the responsibility for convincing them rests on each of us, as it should.