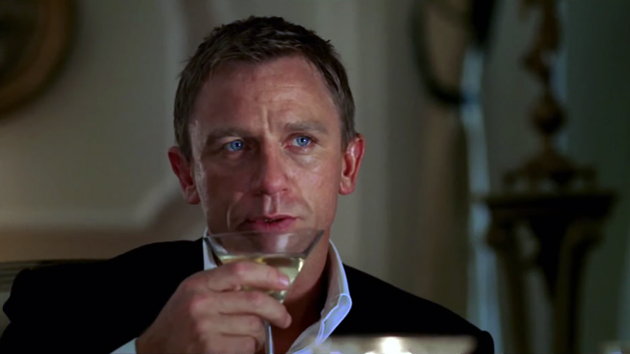 Screenshot: <a href="https://www.youtube.com/watch?v=36mnx8dBbGE">YouTube</a>/Columbia Pictures and MGM

A version of this story was originally published by Gastropod.

Whether you sip it with friends, chug it before hitting the dance floor, or take it as a post-work pick-me-up, there’s clearly nothing like a cocktail for bracing the spirit. In addition to its peculiar history as a medicinal tonic, plenty of hard science lies behind the perfect cocktail, from the relationship between taste perception and temperature to the all-important decision of whether to shake or stir.

In this episode of Gastropod—a podcast that looks at food through the lens of science and history—we discover the cocktail’s historical origins, its etymological connection to a horse’s butt, and its rocky history, post-Prohibition. We also investigate the science of the perfect cocktail with culinary scientist Dave Arnold. Here are three tips he shared with us that will improve your drinks and wow your guests. Cheers!

Tip #1: Add salt—but not too much. It might seem counterintuitive, but, in a world overflowing with fancy bitters and spherical ice makers, the thing your cocktail is missing is actually much simpler: salt. Arnold, the mixologist behind high-tech cocktail bar Booker and Dax, shared this secret with Gastropod. It’s just one of several scientific tricks contained in his new book, Liquid Intelligence: The Art and Science of the Perfect Cocktail.

Of course, the most important ingredient in a cocktail is the liquor. The sugar, acids, and ice choices also have flavor implications, making every cocktail recipe into a kind of calculus that factors in the physics of energy transfer as well as variations in the molecular structures of different sweeteners.

But salt can play a crucial role. Arnold is quick to point out that you should only add a very tiny amount—”We are not talking about salting the rim of your glass here!” he told Gastropod. 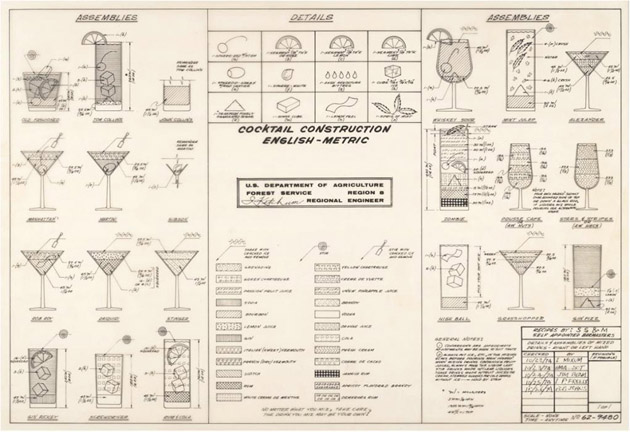 Cocktail construction chart, created by the US Forest Service in 1974, now housed in the National Archives

Arnold’s insight draws on the same logic that calls for adding a pinch of salt to most baked goods, from ice cream to pastry. “These very, very small quantities of salt really just cause all the flavors to kind of pop,” Arnold explains, because of the way our taste buds work. Recent research has begun to tease out how the receptor cells on our tongues responds to sour, bitter, sweet, and salty tastes differently depending on their concentration and how they are combined. For example, if you add a tiny sour note to a bitter-flavored drink, it will actually boost the bitter sensation, but at a more moderate concentration, sour tastes suppress bitterness. (Try this at home, by adding a drop of lime to a margarita, versus the full ounce.)

Similarly, at very low concentrations, salt doesn’t register as a taste at all, but instead reduces bitterness and boosts sweet and sour notes in the food or drink you add it to. Basically, says Arnold, “next time you make a cocktail, add a tiny little pinch of salt to it and stir—and then tell me you don’t like it better.”

Tip #2: Shake daiquiris, not martinis. James Bond is famous—some might say notorious—for preferring his martini shaken, not stirred. But science-minded bartenders would urge you not to follow his lead—though Arnold is quick to point out that the right way to make a drink is the way it tastes good to you. Still, there’s some solid science behind why a martini should be stirred and a daiquiri shaken, rather than the other way around. Both methods chill, dilute, and blend your drink—but they have different effects on flavor and texture that work better with some cocktail recipes than others.

Typically, Arnold explains, when you shake a drink, it will get colder—and thus more diluted—than it would be after stirring. “Banging ice rapidly around inside a shaking tin is the most turbulent, efficient, and effective manual chilling/dilution technique we drink makers use,” he explains. Because flavor perception, and sweetness, in particular, is blunted at cooler temperatures, a shaken drink needs to start out significantly sweeter than its stirred equivalent.

Shaking also adds texture to a drink, in the form of lots of tiny air bubbles. That’s a good thing when you’re making a cocktail with ingredients that taste nice when they’re foamy, like egg whites, dairy, and even fruit juice, and not as good when you’re mixing straight liquor with bitters. Sorry, Mr. Bond.

Or, as President Jed Bartlet put it, “James is ordering a weak martini and being snooty about it.”

The other thing to bear in mind is that you really shouldn’t linger over a shaken drink. “The minute that someone hands you a shaken drink, it is dying,” says Arnold. “I hate it when people don’t drink their shaken drink right away.” We can’t responsibly advise you to chug them, so we recommend making your shaken drinks small, so that you can polish them off before the bubbles burst.

Tip #3: Add milk. And then remove it. Ever since the first ice-cube was added to the original cocktail recipe of liquor, bitters, and sugar, mixologists have loved their bar gear. Ice-picks, mallets, swizzle sticks, shakers, strainers, and even red-hot pokers were all standard features of the nineteenth-century celebrity bartender’s toolkit. Today, Dave Arnold has added rotary evaporators, iSi whippers, and liquid nitrogen to the mix, placing the most cutting-edge cocktails out of reach of the home mixologist.

But there is one super trendy, high-tech trick that you can try at home. It’s called “booze-washing,” and it makes use of protein to remove the astringency from a drink. It actually has a historic basis—even Ben Franklin wrote down his own a recipe for milk punch that uses the casein protein in milk to strip out the phenolic compounds and turn a rough-around-the-edges brandy into a soft, round, soothing drink. But Arnold came up with the idea when he was trying to make an alcoholic version of an Arnold Palmer, the delicious iced tea/lemonade mix.

“I knew that adding milk to tea makes it less astringent, which is why the Brits do it,” Arnold explained. “And then I wanted to get rid of the milk, because I didn’t want a milk tea, I wanted a tea tea.” So he added citric acid, which caused the milk to curdle, so he could separate it out in a centrifuge. “And only afterwards was I like, oh yeah, milk punch!”

Arnold washes drinks to remove flavors, rather than add them. He’s taking advantage of the chemical properties of protein-rich ingredients—milk, eggs, or even blood—that preferentially bind to the plant defense chemicals that can give over-oaked whiskey, certain red wines, tea, coffee, and some apple varieties a mouth-puckering dryness. He’s found that as well as smoothing out a drink, booze-washing has the side benefit of creating a lovely, velvety texture.

Arnold demonstrates booze-washing in a sequence of photos from his new book, Liquid Intelligence. Photos by Travis Huggert, who is also responsible for the image used in the embedded Soundcloud player, above.

The good news is that you don’t need a centrifuge to make the perfect milk punch or alcoholic Arnold Palmer at home. You follow Arnold’s recipe (which he shares on the Gastropod website), let it sit overnight, and then strain out the curds through a cloth and then through a coffee filter. According to Arnold, your yield will be a little lower than with a centrifuge, but the result will be just as tasty. His only word of warning is that you have to drink the resulting cocktail within a week, or else the proteins will clump together and the drink will lose its foaming power. But that shouldn’t be too difficult…

Listen to Gastropod’s Cocktail Hour for much more cocktail science and history, including an introduction to the world’s first celebrity bartender, an unexpected use for Korean bibimbap bowls, and a cocktail personality test based on Jungian analytics.

Gastropod is a podcast about the science and history of food. Each episode looks at the hidden history and surprising science behind a different food and/or farming-related topic—from aquaculture to ancient feasts, from cutlery to chile peppers, and from microbes to Malbec. It’s hosted by Cynthia Graber, an award-winning science reporter, and Nicola Twilley, author of the popular blog Edible Geography. You can subscribe via iTunes, email, Stitcher, or RSS for a new episode every two weeks.