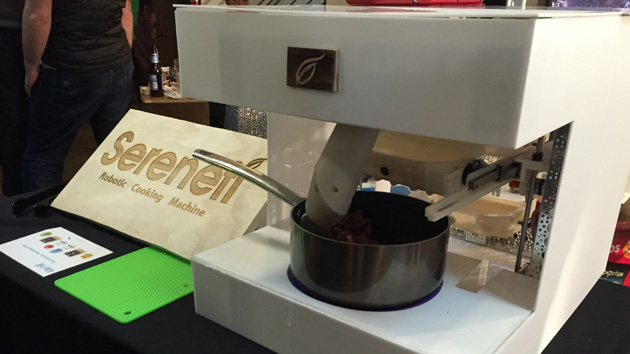 In the not-so-distant future, a robot named Cooki will make you dinner. Cooki will follow a recipe drawn from a database of millions of crowd-sourced ideas accessed through a subscription service similar to iTunes. Then, it will stir together pre-chopped ingredients with a robotic arm. Instead of the $15 required to buy and deliver take-out food, Cooki’s meal will cost you $4 to $5.

At least, that’s how the future will look if Timothy Chen has anything to do with it.

Chen is the CEO of Sereneti Kitchen, the company producing an automated robot that can supposedly cook “restaurant-quality” meals at your kitchen counter and clean up after itself. Chen was one of around a dozen entrepreneurs pitching their victual innovations at a tech event called the “Future of Food,” hosted by the San Francisco co-working space Parisoma on Wednesday. A line snaked around the block at the entrance of the building at 7 p.m. when I arrived. Inside, designers, data-geeks, food marketers, and underground supper club hosts mingled over beers or the papaya-colored smoothie samples from the Pantry vending machine. I overheard the phrases “superfood” and “drought-friendly” more than once over the course of the evening. 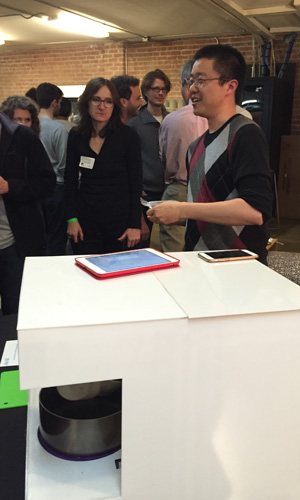 The concept behind the cooking robot comes from Chen’s 18-year-old twin sisters, Haidee and Helen, who wondered why their mom had to spend so many hours making fresh food every day. “Shouldn’t cooking be as easy as pushing a button?” their IndieGogo campaign page implores. Aside from making cooking more efficient, Sereneti’s social mission includes a desire to cut down on food waste and promote access to healthy ingredients.

Though Cooki only really does one-pot cooking, Sereneti imagines its machine making 60 percent of the world’s types of food—from pastas to salads to curries. Chen hopes to retail Cooki for around $500, or $200 if customers subscribe to a recipe and ingredients delivery service. (You could also prepare and input your own ingredients into the robot).

Midway through the “Future of Food” event, I wander over to Sereneti’s table to catch Cooki in action. Dressed in an argyle sweater and sporting rectangular glasses, Chen’s a quick-talking guy with a background in robotics. “This is the Keurig for food,” he explains, referring to the individualized coffee pod machines that I’ve covered in the past. He pulls out clear plastic trays full of raw bacon, lamb, cherries, and pine nuts that have been prepared and preserved with the help of food scientists. Once loaded up with the goods, the machine extracts one of the trays, tips it into a pot heated underneath by coils, and begins to stir. Soon, the smell of bacon oozes out from under the machine’s glossy white hood.

Chen has pretty big dreams for Cooki: As he sees it, it will not only save parents time, it could also make them money. By crowd-sourcing recipes and charging people one-time-use fees, “every time someone uses your recipe—you get paid,” Chen explains. “It’s the ultimate in multi-level marketing,” he says to me—”and it’s not even a Ponzi scheme!”

Okay. While Cooki’s frying, I decide to check out some of the other booths. A man with watery blue eyes and a thick French accent passes out crackers smudged with bone-white brie made from almond milk. Unlike some of the tasteless, pasty vegan cheeses I’ve sampled in the past, Kite Hill’s cheese draws from the traditional cheesemaking process: Cultures and enzymes are added to the milk to create an actual curd. Kite Hill claims to be the only company treating almond milk this way. The result is impressive—if I didn’t know any better, I would think it was a sheep’s milk cheese. Kite Hill’s cheesemaker, Jean Prevot, who hails from France, spent 15 years in the dairy industry before turning to almond milk “for the challenge of it.” 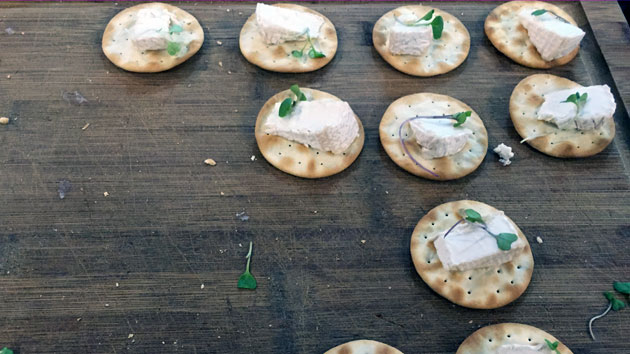 At the table across the way, two chipper, unblinking blonde women dish up crackers made with flour from ground-up crickets. Their San Francisco-based company, Bitty Foods, produces the cookies as well as a cricket-based baking flour “that’s high in protein, drought-resistant, and lower in greenhouse-gas emissions,” as cofounder Megan Miller tells one taster. I overhear two men discussing their cookies in between bites. “There’s a little aftertaste,” one says. “It’s subtle—if I wasn’t thinking about it, I wouldn’t have picked up on it.” 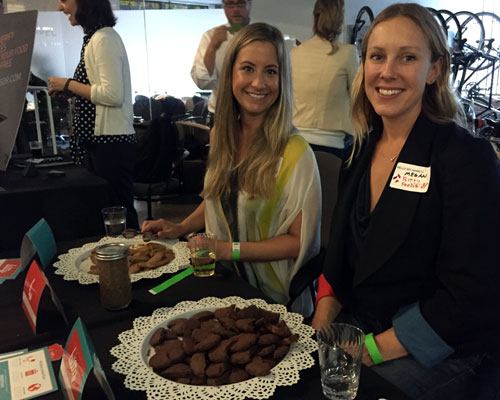 Over to the Kuli Kuli Foods table, where women in acid-green aprons peddle samples of bars made of moringa, a leafy plant that Time recently deemed the new kale. Kuli Kuli is the first US company marketing moringa. Its founder, Lisa Curtis, first learned about the plant while in Peace Corps in Niger in 2010. Feeling malnourished on the local diet, she was urged to try the nutrient-dense moringa plant, which is high in calcium, protein, amino acids, and vitamin C. The plant grows super fast and thrives in hot, dry climates. Curtis realized that locals weren’t marketing the superfood because they had no international market, so she set out to create one in the US by importing the plant in powder form. Aside from fueling her own fruit and nut bar company, she tells me that local juice joints around San Francisco are picking it up for use in smoothies. (Side note: Fidel Castro is a huge moringa fan.) 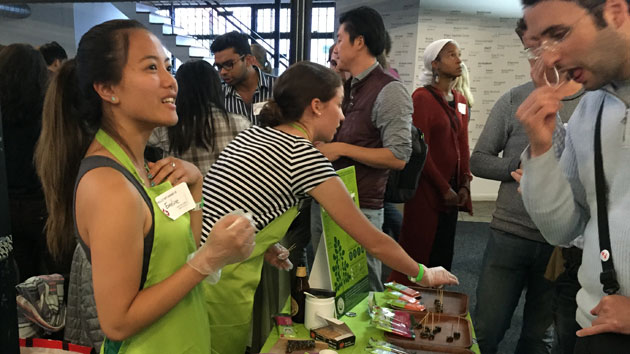 I want to love moringa. If the current California drought is any predictor, we’re going to need plants that survive harsher conditions and provide such an impressive array of nutrients. But this one tastes rather grassy, and goes down like a shot of wheatgrass, which is to say, abruptly. So power to Kuli Kuli, but here’s hoping its moringa recipes continue to evolve.

I make it back to Chen’s table just in time for the tasting of Cooki’s “sauteéd lamb and macerated cherries” dish. Cooki had certainly cooked through the lamb, softened the cherries, and roasted the pine nuts. I don’t eat meat, so I had to rely on other people’s tastebuds to know how the dish turned out. “It’s pretty good,” one woman, Barb, told me, and shrugged. “I do wonder how it will cook vegetables,” another taster said. Neither of them were aware that the dish included bacon grease. To which, I had to ask—doesn’t everything taste pretty good when coated in bacon grease? 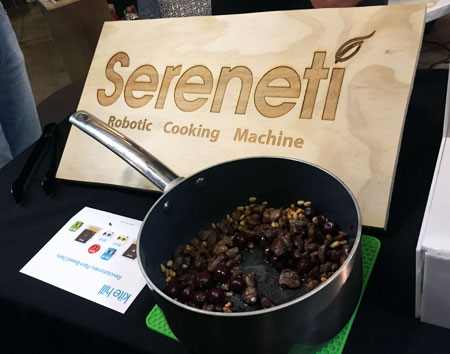 Lamb, cherries, and pine nuts (and bacon) made by Cooki