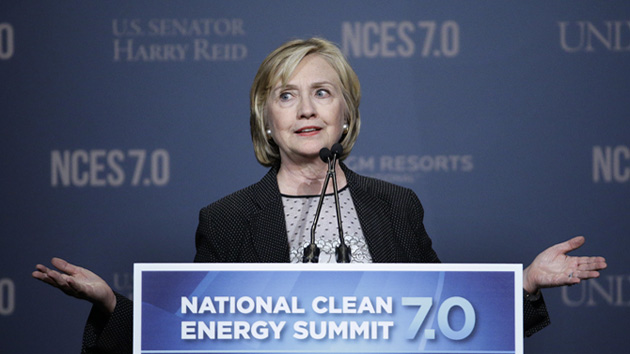 It’s strange to remember how bitterly divisive the 2008 Democratic presidential primary battle was. Hillary Clinton’s and Barack Obama’s platforms and ideological positioning were awfully similar. And on the chief difference between them—Obama’s less hawkish foreign policy—the victor wiped away that distinction by appointing Clinton as secretary of state. Now Clinton has announced her candidacy and is poised to coast through the 2016 Democratic primaries as her party’s prohibitive favorite. Would a Clinton presidency be essentially a third Obama term?

On climate change and energy, it seems the answer is yes. For better and for worse, Clinton’s record and stances are cut from the same cloth as Obama’s. Her close confidant and campaign chair, John Podesta, served as an Obama advisor with a focus on climate policy. Like Obama and Podesta, Clinton certainly seems to appreciate the seriousness of the threat of catastrophic climate change and to strongly support domestic policies and international agreements to reduce carbon emissions. But, like Obama and Podesta, she subscribes to an all-of-the-above energy policy. She promotes domestic drilling for oil and natural gas, including through potentially dangerous fracking. (The Clinton campaign did not respond to our request for comment.)

1. She understands the science. In a December speech to the League of Conservation Voters, Clinton said, “The science of climate change is unforgiving, no matter what the deniers may say. Sea levels are rising; ice caps are melting; storms, droughts and wildfires are wreaking havoc…If we act decisively now we can still head off the most catastrophic consequences.”

2. She thinks the politics of climate change are daunting. In the same LCV speech, she said, “The political challenges are also unforgiving. There is no getting around the fact that the kind of ambitious response required to effectively combat climate change is going to be a tough sell at home and around the world at a time when so many countries including our own are grappling with slow growth and stretched budgets.” She’s not wrong, but she’s looking at it rather pessimistically. Polls show that a large majority of Americans support limiting carbon emissions, and are even willing to tolerate slightly higher energy prices to do so. Moreover, investing in transitioning to clean energy will ultimately mean more economic growth, not less, and that’s how politicians such as Clinton should frame it.

3. She fully supports Obama’s landmark power-plant rules. In her LCV speech, Clinton praised the EPA’s proposed Clean Power Plan to regulate carbon emissions from power plants, saying, “the unprecedented action that President Obama has taken must be protected at all cost.” As The Washington Post‘s Greg Sargent noted, this is hugely important. Reading the tea leaves, this means she would be willing to veto any congressional Republican effort to repeal the rules—even if they attached it to the budget and a veto meant shutting down the government. That’s an absolute must for any president who is serious about climate change.

4. She connects climate change to women’s rights. Clinton has been a strong advocate for clean cookstoves—an issue that might sound small, but has big impacts on the daily lives and health of poor women and their families. In 2010, as secretary of state, she took the lead in launching the Global Alliance for Clean Cookstoves, a public-private partnership led by the United Nations Foundation, with the aim of deploying 100 million clean cookstoves in the developing world by 2020. Currently, families in poor countries often rely on dirty stoves burning high-carbon fuels such as wood. On a macro level, this leads to CO2 emissions and deforestation. On a human level, the inhalation of smoke and other carcinogens is a huge health and safety risk, and since women do most of the cooking, they suffer the most. Clinton has long been a champion of women’s rights internationally, so it makes sense that she’s connecting these dots.

5. She promoted fracking abroad while secretary of state. Clinton encouraged developing countries to sign deals with American fossil fuel companies to extract their shale gas through fracking. This is consistent with Obama’s fondness for touting natural gas as a lower-carbon “bridge fuel” to help us move from coal to renewables. Mariah Blake of Mother Jones did a deep dive from last year that found, “Under her leadership, the State Department worked closely with energy companies to spread fracking around the globe—part of a broader push to fight climate change, boost global energy supply, and undercut the power of adversaries such as Russia that use their energy resources as a cudgel. But environmental groups fear that exporting fracking, which has been linked to drinking-water contamination and earthquakes at home, could wreak havoc in countries with scant environmental regulation. And according to interviews, diplomatic cables, and other documents obtained by Mother Jones, American officials—some with deep ties to industry—also helped US firms clinch potentially lucrative shale concessions overseas, raising troubling questions about whose interests the program actually serves.”

6. Her family’s charitable foundation takes lots of oil money. Big oil companies like ExxonMobil and ConocoPhillips have given millions of dollars to the Clinton Foundation, as have Saudi Arabia and other oil-rich nations in the Middle East. Thursday brought the latest exposé on this issue from the International Business Times, which reports on donations from Pacific Rubiales, a Canadian oil company accused of human rights violations in Colombia. Pacific Rubiales’ founder, Frank Giustra, now sits on the Clinton Foundation’s board. IBT reports, “After millions of dollars were pledged by the oil company to the Clinton Foundation—supplemented by millions more from Giustra himself—Secretary Clinton abruptly changed her position on the controversial US-Colombia trade pact. Having opposed the deal as a bad one for labor rights back when she was a presidential candidate in 2008, she now promoted it, calling it ‘strongly in the interests of both Colombia and the United States.'” A cynic would say oil companies are buying influence with the Clintons without being subject to campaign finance laws. A Clinton defender would point out that the foundation gives away this money, it isn’t going into Hillary Clinton’s pocket or her campaign account.

8. She avoids saying anything about Keystone XL. Even when asked directly about it, Clinton just refuses to answer. In January she told a Canadian audience, “You won’t get me to talk about Keystone because I have steadily made clear that I’m not going to express an opinion.” This, in fairness, may simply reflect her understandable concern that as a former secretary of state she should not take a position on an issue currently under review by her successor. It’s also a tough issue for her, though, as it pits environmentalists and climate hawks against Democratic-leaning construction unions and most independent voters who favor more oil production in North America.

So Clinton shares what David Roberts has identified as Obama’s split personality on climate change—tackling it aggressively on the consumption side but continuing to boost fossil fuel supplies. That’s not as bad as the science deniers on the Republican side, or the climate curmudgeonliness of likely Democratic candidate Jim Webb. But it’s also not quite the climate hawkishness we need.