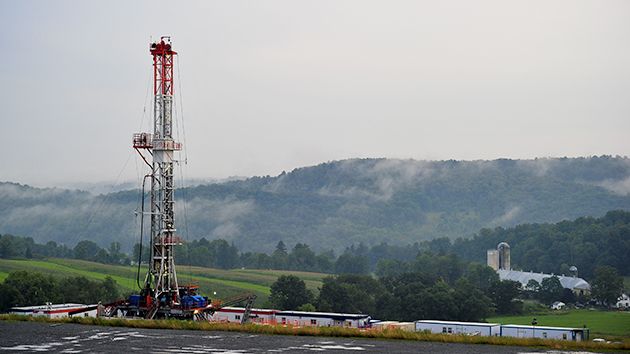 One of the biggest differences between fracking and other kinds of industrial development is that fracking often occurs extremely close to towns and homes. That’s because oil and gas wells take up far less space than open-pit coal mines and cement factories. One 2013 analysis estimated than at least 15.3 million Americans have a gas well within a mile of their home.

So you might think that data on the performance records of oil and gas companies—how often they have spills, or exceed air pollution standards, etc.—would be readily available to locals who have an immediate stake in knowing about what’s going on in their backyard.

Not so, according to a new study from the Natural Resources Defense Council and the FracTracker Alliance, a nonprofit that collects data on the gas industry.

“This information is extremely hard for the public to get,” says the NRDC’s Amy Mall.

Thirty-six US states have active oil and gas operations. But according to the report, just three of these states have readily accessible databases that the public can use to see which drilling companies have been cited for violating environmental rules or other standards. What’s more, the records that do exist paint a disturbing picture.

“There are two main issues,” said NRDC senior analyst Amy Mall. “One is that this information is extremely hard for the public to get. The second is that they’re violating the law a lot.”

The report points out that in Ohio and Arkansas, for example, violations are not published in an online database. Texas and North Dakota, meanwhile, charge citizens for access to violation data. (A spokesperson for the North Dakota Industrial Commission clarified that records can be accessed on the department’s office lobby computer for free. Otherwise, a home subscription to that database costs $175 per year, or requests can processed by the department for $25 per hour.)

In other words, fracking companies are operating in many cases with a disturbing lack of transparency.

“It’s a dirty window that somebody needs to clean,” Mall said.

In Colorado, West Virginia, and Pennsylvania—where public data is available—the NRDC identified hundreds of violations and alleged violations issued to dozens of companies. The citations cover everything from spills to improper drilling techniques. (Violations can also be issued for problems of lesser public concern, such as an incorrectly sited road sign at a drilling site.) The actual number of reported violations likely understates the true scope of the problem, Mall said, since in many cases the number of reported spills is higher than the number of violations issued. Mall blamed the discrepancy on inadequate and under-staffed state enforcement agencies.

As the adoption of advanced fracking methods has fueled a surge in oil and gas drilling nationwide over the past decade, state regulators have developed a reputation for lax enforcement of their own rules. A 2011 review by Greenwire found that in Texas, for example, 96 percent of infractions by oil and gas companies resulted in no punitive action. The Obama administration recently moved to improve the situation by issuing new, stricter standards for fracking operations. But those will only cover drilling that takes place on federal land, which is about 10 percent of all oil and gas operations. State agencies are responsible for the rest.

“This isn’t so much about the strength of the rules,” says Mall. “This is about the rules being strongly enforced.”

The NRDC report adds up violations across Colorado, West Virginia, and Pennsylvania, and identifies some of the top alleged offenders for the period 2009-1013. When contacted by Climate Desk, several of those companies disputed NRDC’s findings. A spokesperson for Cabot Oil & Gas said that simply tallying all violations, without breaking them down into more specific categories, can make a company’s track record appear worse than it is. For example, she said, in some cases an “administrative” violation, like an incorrectly labeled sign, can apply to every well on a drilling site, causing a single error to result in several violations.

A spokesperson for Talisman Energy said that according to the company’s records, most of its violations are for administrative infractions. (Mall said that while the volume of violations processed for the report was too great to identify what proportion were for administrative problems like this, the NRDC believes “that any violation should be taken seriously because it could indicate a pattern of non-compliance.”)

A spokesperson for Anadarko suggested that some spills attributed to the company in the report may have actually been caused by previous operators on the same well site.