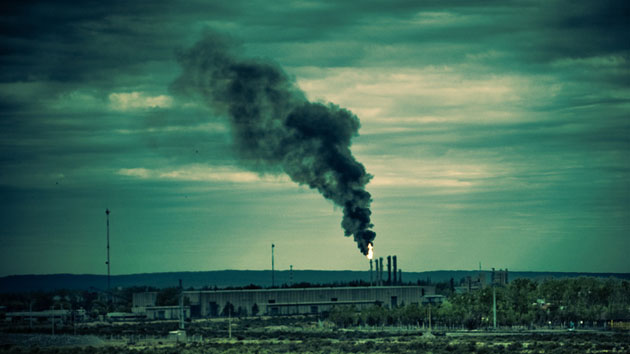 
This story originally appeared on the Slate website and is reproduced here apart of the Climate Desk collaboration.

According to technological optimists, in the next two or three decades, humanity will embark on a new era of possibility. Super-smart computers and other advances may even make certain types of less risky, large-scale climate actions a reality. Open any number of sci-fi books from the last few decades and you have an idea of how nanotechnology could make planetary-scale engineering possible. (Kim Stanley Robinson’s work comes immediately to mind.) Maybe swarms of self-replicating photosynthetic nanobots will be able to quickly and cheaply suck CO2 from the air? What about coating all the world’s rooftops in organic solar panels? Or optimizing biofuel production from algae on the molecular scale? The possibilities are mind-boggling.

Earlier this month, delegates from virtually every country on Earth gathered in Geneva to produce the initial draft of a global climate agreement to be signed in Paris later this year. In it were several references to net zero or negative emissions after 2050.

On our current path, humanity is still tracking at (or even slightly above) the worst-case climate scenario laid out about a decade ago. The latest comprehensive update from the world’s climate scientists outlined a best-case scenario that is now likely to require a ramp-up of carbon capture-and-storage to meet emissions targets. If it works, sucking excess carbon dioxide from the air could result in net negative global carbon emissions by the end of the century, and likely provide our best hope for returning concentrations to pre-industrial levels in our lifetimes. If it works.

We’re still far, far from that trajectory—emissions continue to increase each year at the global level. We’ve waited so long to address escalating carbon emissions that we must honestly consider research into these technologies. And, let’s face it, trying to shift humanity off fossil fuels any time soon feels increasingly like a lost cause.

And that means all options, no matter how crazy, should still be on the table. With nanotechnology on the cusp, the future may hold more promise than we think. By 2042, when current projections show Earth’s carbon budget being depleted, computers may have gained capabilities we can only dream of now. (The carbon budget is the total amount of additional carbon dioxide that can be emitted by humanity for all time while maintaining a temperature rise of less than two degrees Celsius.)

To be clear, there are some technologies that pose greater threats than others. Raymond Pierrehumbert, commenting in Slate on the recent National Research Council report on geoengineering, called intentionally interfering with the Earth’s incoming sunlight “wildly, utterly, howlingly barking mad.”

The report he referenced, the most comprehensive and authoritative to date on the subject, focuses on two truly terrifying technologies: injecting tiny reflective particles into the stratosphere and intentionally brightening clouds over the ocean. Both aim at increasing the planet’s albedo—the fraction of incoming sunlight that gets reflected into space. And both are sure to have effects beyond just reducing the planet’s temperature. Messing with the amount of sunlight the Earth receives in an attempt to turn down the planet’s thermostat could alter global weather patterns and won’t address other problems associated with a buildup of CO2, like ocean acidification.

This sort of geoengineering may help for a little while, but in all likelihood, it’s just going to make the problem worse in the long run. Plus, there are huge ethical questions with this sort of technology. Who owns a technology that can affect the entire planet? Who decides when and where it is used?

Still, the fact is we are already geoengineering the climate by continuing to emit ever-increasing amounts of carbon. And there are much simpler strategies to reverse climate change. Instead of messing with sunlight, arguably the most promising technology reverses centuries of fossil-fuel burning by simply removing excess carbon dioxide from the air.