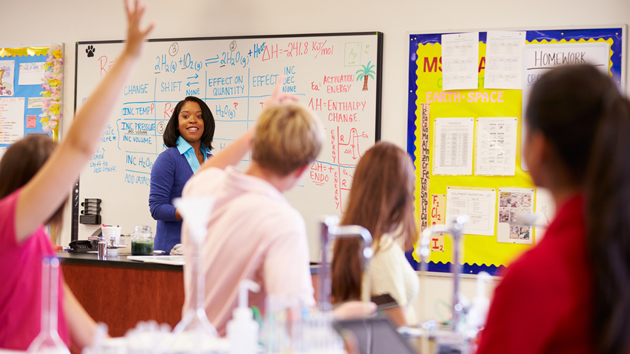 The West Virginia State Board of Education (SBOE) has drawn the ire of science education groups after voting on standards that encourage students to debate the causes of climate change.

As first reported in The Charleston Gazette, a member of the state board of education requested last year that alterations be made to a blueprint of new science standards, suggesting in particular that climate change not be treated as a “foregone conclusion.” After the state Department of Education drafted those changes and made the standards available for public comment, the SBOE voted in December to officially adopt them.

The science standards are based on guidelines from the Next Generation Science Standards (NGSS), a set of curriculum benchmarks for schools. The NGSS was developed by a consortium of 26 states, including West Virginia, in an effort to make sure students around the country are being taught rigorous coursework.

In 2013, climate scientists with the Intergovernmental Panel on Climate Change (IPCC) reported that they are 95 percent certain that humans are causing global warming. Similarly, a 2013 report from the Institute of Physics found that 97 percent of scientists believe climate change is being driven by humans.

Lisa Hoyos, director and co-founder of the group Climate Parents, a group that advocates for climate change education, told The Huffington Post that she does not think science class should be treated like a “debate club,” since scientific teaching is based on evidence. She said her organization will be putting out a petition to try and “revoke the false science from West Virginia.”

“There’s an ethical expectation that parents have of Board of Education members—that they are committed to ensuring that kids are taught actual, accurate science,” Hoyos told HuffPost this week.

Mark McCaffrey, programs and policy director for the National Center for Science Education, also said in a statement that he thinks “a few board members have been allowed to ride roughshod over the scientific consensus on climate reflected in the NGSS.”

Gayle Manchin, president of the state Board of Education and wife of US Sen. Joe Manchin (D-W.Va.), noted that people didn’t seem to take issue with the standards during the public comment period. However, after receiving negative feedback about the standards more recently, she said the board will hold further discussions on them.

“I believe that our board members are motivated to think about what will be best for the students of West Virginia, and I value their expertise in different areas,” Manchin told HuffPost.

She said she does not think the substance of the standards has changed, and she said the new standards “encourage children to think more critically and evaluate all the information that’s out there.”

According to The Charleston Gazette, board member Wade Linger was among the people leading the effort to change the science standards, and was the one to suggest replacing the phrase “the rise,” as in the rise of global temperatures, with “the rise and fall.” However, Linger told HuffPost that he was not the only voice calling for the revisions.

“The press has given me way too much credit for this,” said Linger. “This was a board decision, not a single-person decision.”

Linger said he is pleased with the new standards because they “teach kids how to think, not what to think.”

Still, Marie Hamrick, co-president of the West Virginia Education Association’s Raleigh County affiliate, told The Register-Herald that she thinks the state board ignored scientific evidence when voting to change the standards.

“This group thinks that they are smarter and wiser than the scientific community that designed the questions,” Hamrick said.

The new standards will be implemented in West Virginia schools for the 2016-2017 school year.