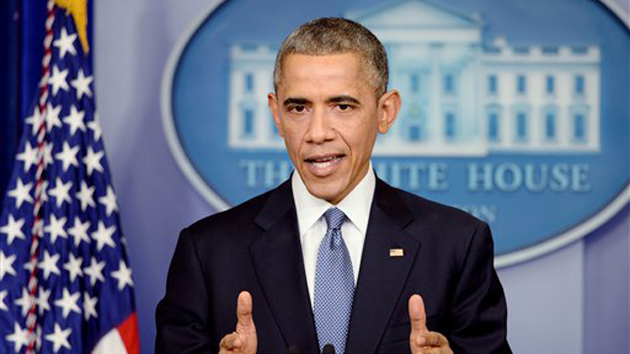 Speaking at his end-of-the-year press conference on Friday afternoon, President Obama sounded very much like he’s poised to reject the Keystone XL pipeline. He gave his sharpest assessment to date of its potential costs and benefits—lots of costs and few benefits.

Climate hawks rejoiced, not only because of Obama’s implied opposition to Keystone, but because he finally confronted American ignorance of how the oil market works, and attempted to reorient our energy policy around reality.

At the press conference, Obama took a question from The Washington Post‘s Juliet Eilperin on what he will do about the Keystone XL pipeline, which congressional Republicans plan to try to ram through in January. Eilperin said Obama has in past comments “minimized some of the benefits” of Keystone. Obama responded that he has merely accurately characterized the benefits, which are objectively minimal, and walked Eilperin through a lesson in macroeconomics.

At issue on Keystone is not American oil, it is Canadian oil that is drawn out of tar sands in Canada. That oil currently is being shipped through rail or trucks, and it would save Canadian oil companies and the Canadian oil industry an enormous amount of money if they could simply pipe it all the way through the United State down to the Gulf. Once that oil gets to the Gulf, it is then entering into the world market and it would be sold all around the world… There is very little impact, nominal impact, on US gas prices, what the average American consumer cares about, by having this pipeline come through.

And sometimes the way this gets sold is, let’s get this oil and it’s going to come here and the implication is that’s gonna lower oil prices here in the US It’s not. There’s a global oil market. It’s very good for Canadian oil companies and it’s good for the Canadian oil industry, but it’s not going to be a huge benefit to US consumers. It’s not even going to be a nominal benefit to US consumers.

And video of Obama’s whole answer:

It has been a source of aggravation to climate hawks that Obama has often pandered to the economic ignorance of the American public when it comes to gas prices. Obama’s “all of the above” energy strategy falsely asserts that increased domestic production of oil will reduce “our dependence on foreign oil,” as if there really were any such thing. Oil is a global commodity. Prices are set by global supply and global demand. Whether the oil we buy happens to be drilled in the US, Canada, Russia, Venezuela, Saudi Arabia, or Libya makes no difference. We are subsidizing our adversaries who produce oil as long as we are filling our gas-guzzlers with it. More oil production in the US, or oil importation from Canada, will not inoculate us against the price shocks caused by supply disruptions in the Middle East or elsewhere.

The whole American debate around energy policy has been perverted by the public’s failure to understand this basic concept. Republicans, of course, eagerly fan the flames of economic illiteracy. Obama’s approach has usually been to try to split the difference between this foolishness and smart energy policy by promising to increase domestic production of both renewables and fossil fuels. But now Obama has confronted these public misperceptions and tried to educate the public so that energy policy can be decided on a more rational basis.

As for Keystone, Obama went on to observe that the other supposed benefit, construction jobs, is real but small and temporary. Meanwhile, our transportation and clean water infrastructure crumbles and Republicans refuse to appropriate money to fix and improve it, which would create more jobs and lasting economic effects than construction of any pipeline. “[W]hen you consider what we could be doing if we were rebuilding our roads and bridges around the country, something that Congress could authorize, we could probably create hundreds of thousands of jobs, or a million jobs,” he said. (In fairness, Obama has refused to propose raising the gasoline tax to fund more transportation investment.)

And Obama mentioned the cost of climate change and the possibility that Keystone would exacerbate it. “If we’ve got more flooding, more wildfires, more drought, there are direct economic impacts on that,” he said.

The main Keystone drawback Obama neglected to mention is the local environmental risk to the communities the pipeline would pass through due to possible leaks.

Nonetheless, green groups were overjoyed. NextGen Climate, the organization funded by Tom Steyer, immediately sent out video of Obama’s answer with the subject line, “KEYSTONE XL GETS THE PRESIDENTIAL SEAL OF DISAPPROVAL.” We don’t actually know that, yet, but it’s looking likely.