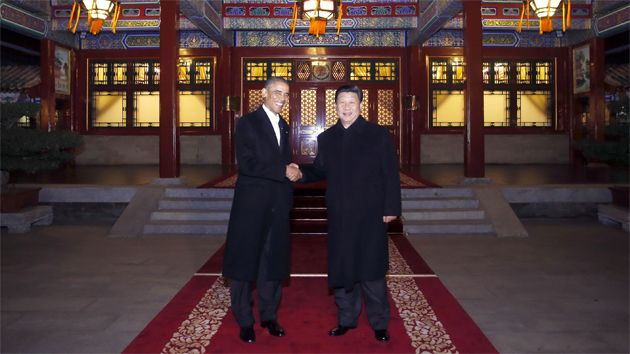 In a surprise announcement Tuesday night, the world’s two biggest economies and greenhouse gas emitters, United States and China, said they will partner closely on a broad-ranging package of plans to fight climate change, including new targets to reduce carbon pollution, according to a statement from the White House.

The announcement comes after President Obama met with Chinese President Xi Jinping today in Beijing, and includes headline-grabbing commitments from both countries that are sure to breathe new life into negotiations to reach a new climate treaty in Paris next year.

According to the plan, the United States will reduce carbon emissions 26-28 percent below 2005 levels by 2025, nearly twice the existing target—without imposing new restrictions on power plants or vehicles.

Tuesday’s announcement is equally remarkable for China’s commitment. For the first time, China has set a date at which it expects its emissions will “peak,” or finally begin to taper downward: around 2030. China is currently the world’s biggest emitter of carbon pollution, largely because of its coal-dependent economy, and reining in emissions while continuing to grow has been the paramount challenge for China’s leaders.

The White House said in a statement that China could reach the target even sooner than 2030. It “expects that China will succeed in peaking its emissions before 2030 based on its broad economic reform program, plans to address air pollution, and implementation of President Xi’s call for an energy revolution.”

But the White House was more cautiously optimistic on China’s goal of reaching the goal of 20 percent total energy consumption from zero-emission sources by 2030. It painted a picture of the challenges ahead for the energy-hungry giant: “It will require China to deploy an additional 800-1,000 gigawatts of nuclear, wind, solar and other zero emission generation capacity by 2030—more than all the coal-fired power plants that exist in China today and close to total current electricity generation capacity in the United States.”

This is the first time such a policy has come from the very top, President Xi Jinping. Previously, the first and only mention of “peaking” came from Vice Premier Zhang Gaoli at the UN climate talks in New York in September.

“This is clearly a sign of the seriousness and the importance the Chinese government is giving to this issue,” said Barbara Finamore, Asia director for the Natural Resources Defense Council, the environmental advocacy group, in an interview from Hong Kong. “The relationship [between the US and China] is tricky, but climate has been one of the areas where the two sides can and are finding common ground.”

The announcement also sets the stage for conflict with the Senate’s new Republican leadership, which just today signaled that attacking Obama’s climate initiatives will be a top priority in 2015.

The plan does not entail using the US Environmental Protection Agency’s authority to regulate greenhouse gases, as the bulk of Obama’s existing climate strategy does. Instead, it involves a series of initiatives to be undertaken in partnership between the two countries, including:

NRDC’s Finamore said the magnitude of the agreement—which was made well in advance of expectations—will provide fresh impetus to the drive for a new global climate agreement in Paris next year. “Hopefully this will give new ambition to other countries as well to move forward quickly,” she said. The agreement “sends a powerful signal to every other country that they are serious and are willing to come to the table to reach a global agreement.”

“Even if the targets aren’t as ambitious as many might hope, the world’s two largest carbon emitters are stepping up together with serious commitments,” said Bob Perciasepe, president of the Center for Climate and Energy Solutions, a Washington policy group. “This will help get other countries on board and greatly improves the odds for a solid global deal next year in Paris.”

“For too long it’s been too easy for both the US and China to hide behind one another,” he said. Or as UN Secretary General Ban Ki-Moon put it: “Today, China and the United States have demonstrated the leadership that the world expects of them.”