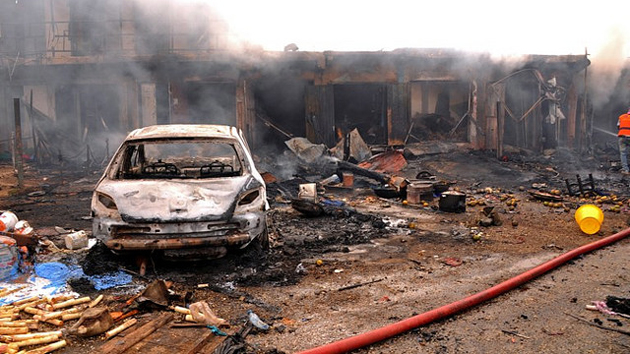 Recently, the Pentagon released a disturbing report. Climate change, it warned, will exacerbate problems like terrorism and disease outbreaks, drain military resources, and create new enemies. The report said that the military’s basic operations—everything from training to its supply chains and infrastructure—are now threatened by rising temperatures and shifting weather patterns. It all points to one conclusion: Global warming is a national security issue.

Now a new analysis, released Wednesday, is naming 32 countries in which conflict and civil unrest could be worsened by the changing climate. The findings are part of the seventh annual “Climate Change and Environmental Risk Atlas” from Maplecroft—a firm that studies how vulnerable countries are to various risks. It concludes that climate change is already impacting “food production, poverty, migration and social stability—factors that significantly increase the risk of conflicts and instability in fragile and emerging states.”

Those pressures could also “lead to disenfranchisement and drive support for radical groups.” 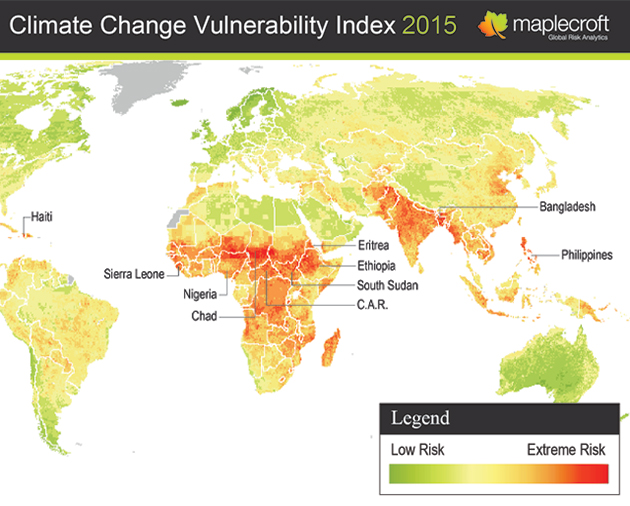 Maplecroft analyzed how exposed populations in these are countries are to climate impacts and assessed how well their governments will be able to adapt over the next 30 years. According to the report, the five countries most vulnerable to climate-related conflict and food insecurity are Bangladesh, Sierra Leone, South Sudan, Nigeria, and Chad. 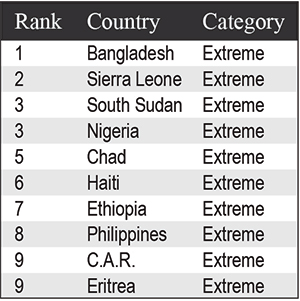 The 10 countries that Maplecroft found were most vulnerable to food insecurity and climate change. Maplecroft

The report’s authors highlight Nigeria (tied for third the list), where “widespread drought and food insecurity helped create the socio-economic conditions that led to the emergence of Boko Haram and the violent insurgency in the North East of the country.”

Boko Haram is a militant Islamist group that the US Justice Department says has been responsible for 600 attacks on government, churches, mosques and schools. It has killed about 5,000 people since 2009 and displaced over 650,000. The group kidnapped more than 200 girls and young women in April. (The Nigerian government says it has reached a ceasefire with the militants that would include the release of the girls, but according to the BBC the talks are still ongoing.)

After visiting Nigeria earlier this year, my Mother Jones colleague Erika Eichelberger found that drought, population explosion, environmental degradation, and poverty are all aggravating the country’s armed conflicts. There are now more clashes between farmers and nomadic herders over ever-dwindling agricultural land, and economic hardships in the country are boosting Boko Haram’s recruitment efforts. Eichelberger quoted Oluwakemi Okenyodo, the executive director of CLEEN Foundation, a Nigerian security-focused nonprofit, as saying that when “young people are pushed to the wall,” there’s a greater chance that they will be sucked into the growing Boko Haram insurgency. Eichelberger reported that “there’s not enough hard evidence yet to implicate human-caused climate change in the bulk of the ecological disaster” in Nigeria—but that could change in the future as rising temperatures increasingly threaten agriculture in the region.

In a 2011 report, the United States Institute of Peace outlined a “basic causal mechanism” linking global warming to future conflict in Nigeria: Water and agricultural land shortages are followed by sickness, hunger, and joblessness. Governmental inaction on these issues in turn opens the door to conflict. “In the increasingly parched, violent northeast,” writes the report’s lead author Aaron Sayn, “members of groups like Boko Haram explain their acts by voicing disgust with government.” 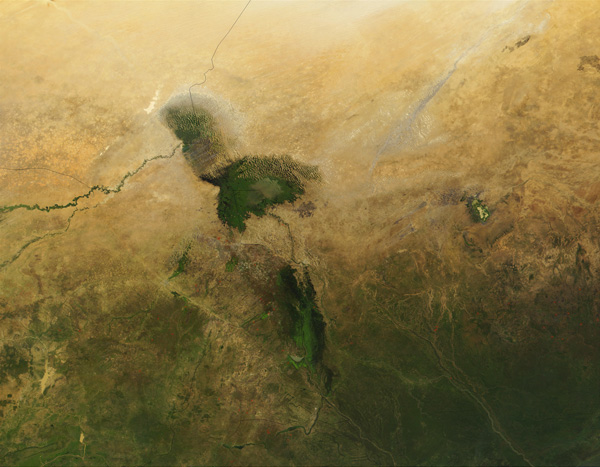 Lake Chad supports vast swathes of Nigerian farming and grazing land, but it has lost more than 90 percent of its original size. Jacques Descloitres/NASA GSFC

Maplecroft’s rankings lend even more weight to the growing body of research tying climate change to the potential for more violence. Prior to the unrest that eventually exploded into revolution and armed conflict, Syria had experienced an unprecedented drought that led to the internal displacement of thousands of people who had lost their livelihoods.

Natural resources were also at the heart of the Darfur crisis. “It is no accident that the violence in Darfur erupted during the drought,” UN Secretary General Ban Ki Moon wrote in a 2007 Washington Post op-ed. “Amid the diverse social and political causes, the Darfur conflict began as an ecological crisis, arising at least in part from climate change.”