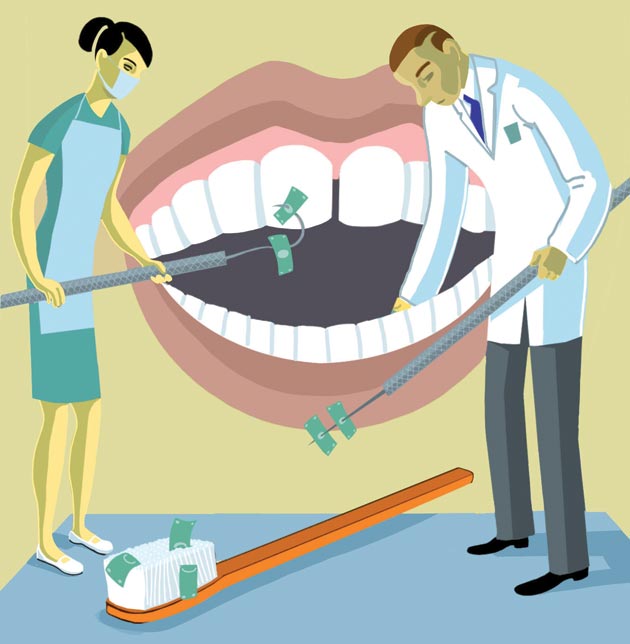 My household’s level of confidence in dentistry is at an all-time low. About six months ago, my dentist informed me that my “bunny teeth” were likely getting in the way of my professional success, a problem he could correct with a (pricey) cosmetic procedure. If I let him fix my teeth, he told me, he was sure I would start “dressing better.” A few months later, my husband scheduled a basic cleaning with a new dentist. Once they had him in the chair and looked at his teeth, they informed him that the regular cleaning wouldn’t do at all: He would need to reschedule for an $800 deep cleaning. No thanks.

We were convinced we must look like suckers—until I came across an op-ed in ADA News, the official publication of the American Dental Association. The article, by longtime pediatric dentist Jeffrey Camm, described a disturbing trend he called “creative diagnosis”—the peddling of unnecessary treatments. William van Dyk, a Northern California dentist of 41 years, saw Camm’s op-ed and wrote in: “I especially love the patients that come in for second opinions after the previous dentist found multiple thousands of dollars in necessary treatment where nothing had been found six months earlier. And, when we look, there is nothing to diagnose.”

Some toddlers treated at one chain underwent as many as 14 procedures—often under restraint and without anesthesia.

“In recent years, I have been seeing more and more creative diagnosis,” Camm told me when I called him at his practice in Washington state. A dentist, he said, might think, “‘Well, the insurance covers this crown, so I’m not hurting this patient, so why don’t I just do it?’ That’s the absolutely wrong approach.”

Poking around, I found plenty of services catering to dentists hoping to increase their incomes. One lecturer at a privately operated seminar called The Profitable Dentist ($389) aimed to help “dentists to reignite their passion for dentistry while increasing their profit and time away from the office.” Even the ADA’s 2014 annual conference offered tips for maximizing revenue: “Taking time to help our patients want what we know they need,” notes one session description, “can drive the economic and reward engine of our practice.”

Upselling in dentistry isn’t a new phenomenon, but it’s having a moment. One reason: Dental school tuition—and debt—has doubled since the ’90s. According to the American Dental Education Association, students who graduated in 1996 were in the hole $112,000 (in 2013 dollars), on average, while 2013 grads were a whopping $215,000 in debt—28 percent were on the hook for $300,000 or more. By contrast, the average med school grad owed $170,000. ADEA executive director Richard Valachovic explained that one reason dental schools have jacked up tuitions is the rising costs of technology for student labs.

In any case, a generation ago, newly hatched dentists would join established practices as modestly paid associates, with the promise of eventually becoming partners. But these days, with dentists retiring later, there’s less turnover in private practice. Instead, more and more young dentists are taking jobs with chains, many of which set revenue quotas for practitioners. This has created some legal backlash: In 2012, for example, 11 patients sued (PDF) a 450-office chain called Aspen Dental, claiming that its model turns dentists into salespeople.

That laser dentistry and whitening package may be a ploy to get you in the door so the practice can upsell you on more-profitable procedures.

Some corporate dentists appear to have crossed the line into fraud. In 2010, Small Smiles, a venture-capital-owned chain with offices in 20 states, was ordered to refund $24 million to the government after an investigation found that its dentists had been performing unnecessary extractions, fillings, and root canals on children covered by Medicaid. A new lawsuit alleges that some toddlers it treated underwent as many as 14 procedures—often under restraint and without anesthesia. (The group was banned from Medicaid this year.) Several other pediatric dentistry chains have been sued over similar allegations.

So what should you watch out for when you go for your next cleaning? First, beware of specials: That laser dentistry and whitening package may be a ploy to get you in the door so the practice can upsell you on more-profitable procedures. Van Dyk also advises caution if your dentist insists on replacing all your old fillings or always recommends crowns instead of fillings. And look out for excessive X-rays: The ADA says healthy patients need a full set (14 to 22) every two years at the most. If your dentist recommends a special “cone-beam” X-ray, get a second opinion, since, along with a 3-D picture of your mouth, it delivers a dose of radiation up to 18 times that of a traditional dental X-ray. While the Food and Drug Administration has approved cone-beam scanners, some radiation experts worry that dentists are using them when a standard X-ray would do just as well. Finally, when it comes to children’s dentists, make sure to find a board-certified pediatric specialist, since not all dentists that cater to children have special training.

The practitioners I spoke to were quick to add that even dubious-sounding treatments are in some cases medically necessary. But if your gut says your dentist is going overboard on treatment, get a second opinion. “Will you have to pay a little more for another consult?” Camm asks. “Sure. But it could end up saving you a whole lot more in the long run.”