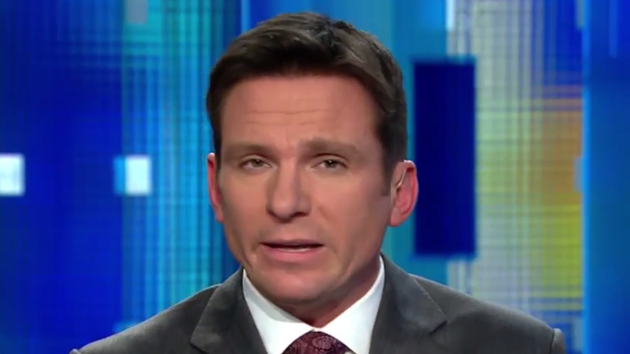 Last week, the internet went nuts about this tweet. It is not hard to see why:

Weir, a CNN anchor, was responding to this Washington Times article, which Fox Nation (a Fox News website) highlighted under the headline, “Climate Doesn’t Cooperate With Al Gore’s Group’s Visit to Denver EPA Hearings.” It was a short piece noting that when Gore’s Climate Reality Project attended an EPA climate change hearing at 9 a.m., “the temperature was a chilly 58 degrees. Plus, it was raining.” Har-har.

Weir was correct to point out in this context that weather isn’t climate. The way he did so, however, was ill advised (even if internet-applauded), and he later sent out this apologizing tweet:

The glop of Midwestern guilt stuck in my chest prob won’t go away until I apologize to @foxnation for name-calling. Dumb move. My bad.

But why was Weir so upset? A look back at his past coverage, mainly at ABC (he only moved to CNN in late 2013), suggests that he’s a journalist who covers climate change well, and really cares about science and technology. His official title upon moving to CNN was, after all, “Chief Innovation Correspondent.” That might explain why he lost his cool over yet another Fox News-connected attack on the science of climate change. (CNN did not respond to a request for comment from Weir late last week.)

Weir appears to be a pretty big science aficionado. When he was cohost of ABC’s Good Morning America weekend edition back in 2008, he fronted this stunning love song segment on science (titled “Science Rocks!”), which included Weir saying that “science is the new sexy” and describing how New York’s World Science Festival is striving to turn “geek chic.” Watch it:

You don’t put together a segment like that unless you think science really matters. And if you think that, then in turn, you probably get annoyed when people attack and undermine it.

Which brings us to Weir’s coverage of climate change while at ABC (where, after his role at Good Morning America, he was an anchor of Nightline). Consider a late 2012 segment featuring James Balog, the photographer and daredevil behind the powerful climate documentary Chasing Ice. Weir started off the segment as follows:

Well, only in America is it controversial for me to begin tonight’s program by declaring that global warming is really happening. For doubters, 332 straight months of above average temperatures is not proof enough.

Or, still more apropos of the current “fucksticks” controversy, consider Weir’s April 2011 coverage of a deadly tornado outbreak and other recent weather extremes. Weir featured NASA expert Gavin Schmidt, who explained that the climate truly is changing. But then Weir went on to point out (paraphrasing Schmidt) that climate change can’t necessarily be detected in individual weather events:

But blaming a tornado in St Louis on climate change? That is a leap too far, [Schmidt] says. Think of it this way. Weather is what happened lately. Climate is what has happened forever.

You can watch it here:

Since moving to CNN, meanwhile, Weir has also made a mark covering climate change. Consider this May 2014 interview, where he questioned Marco Rubio on climate science, prompting the senator to declare that President Obama is “not a meteorologist”:

In other words, in reporting on climate, Weir seems to be one of the good guys. At ABC, he didn’t hesitate to describe what we know about global warming—namely, it’s real and human caused—but also carefully explained that that doesn’t mean you can see it in every new weather event. At CNN, he has already pressed the issue.

So when Fox Nation tweeted out a lame attack on Al Gore…well, at least you can now see where Weir was coming from. That doesn’t defend his lack of decorum. But it does explain his exasperation.