This article originally appeared at Climate Central and is reproduced here with permission.

For the past few weeks, dry and warm weather have fueled large forest fires across Canada’s remote Northwest Territories. The extent of those fires is well above average for the year to-date, and is in line with climate trends of more fires burning in the northern reaches of the globe.

Of the 186 wildfires in the Northwest Territories to-date this year, 156 of them are currently burning. That includes the Birch Creek Fire complex, which stretches over 250,000 acres.

The amount of acres burned in the Northwest Territories is six times greater than the 25-year average to-date according to data from the Canadian Interagency Forest Fire Center.

Boreal forests like those in the Northwest Territories are burning at rates “unprecedented” in the past 10,000 years according to the authors of a study put out last year. The northern reaches of the globe are warming at twice the rate as areas closer to the equator, and those hotter conditions are contributing to more widespread burns. 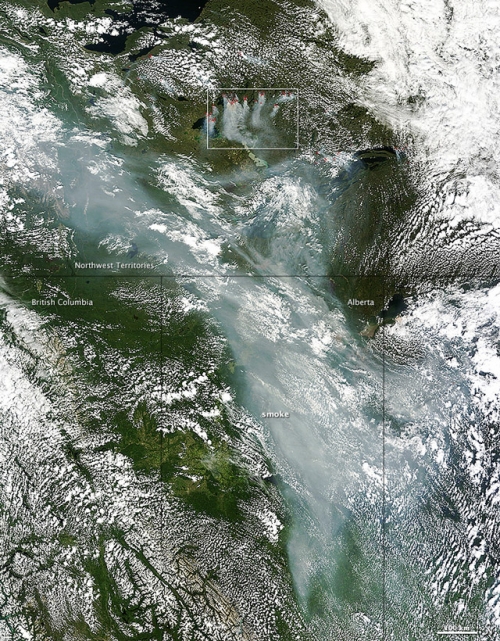 A satellite image of the smoke plume from fires burning in the Northwest Territories captured on July 7, 2014. NASA Earth Observatory

The combined boreal forests of Canada, Europe, Russia and Alaska, account for 30 percent of the world’s carbon stored in land, carbon that’s taken up to centuries to store. Forest fires like those currently raging in the Northwest Territories, as well as ones in 2012 and 2013 in Russia, can release that stored carbon into the atmosphere and contribute to global warming. Warmer temperatures can in turn create a feedback loop, priming forests for wildfires that release more carbon into the atmosphere and cause more warming. The Intergovernmental Panel on Climate Change’s landmark climate report released earlier this year indicates that for every 1.8 degree Fahrenheit rise in temperatures, wildfire activity is expected to double.

In addition, soot from forest fires can also darken ice in the Arctic and melt it faster. The 2012 fires in Siberia released so much soot that they helped create a shocking melt of Greenland’s ice sheet. Over the course of a few weeks in July that year, 95 percent of the surface melted. That could become a yearly occurrence by 2100 if temperatures continue to rise along with wildfire activity.

Forest in other parts of the globe are also feeling the effects of climate change. In the western U.S., wildfire season has lengthened by 75 days compared to 40 years ago. Additionally, rising temperatures and shrinking snowpack have helped drive an increase in the number of large forest fires. In Australia, fire danger is also increasing, if not the total number of fires, due to a similar trend of hotter, dryer weather.

Perhaps not surprisingly then, the current Northwest Territories fires have been fueled by hot and dry weather. Yellowknife’s June high temperatures were 3.8 degrees Fahrenheit above normal highs while rainfall was only 15 percent of normal. Through July 15, high temperatures have been running 4 degrees Fahrenheit above July averages and the city has only seen 2 percent of its normal rainfall for the month. While these conditions can’t be tied specifically to climate change, they’re in line with those trends.

The fires have shut down parts of territory’s Highway 3, a main thoroughfare, and inundated Yellowknife with a thick haze of smoke and ash. The city’s 19,000 residents are also under a health warning. At points last week, the smoke plume was whisked south across the provinces of Alberta and Saskatchewan and even reaching the Dakotas, 2,000 miles away.