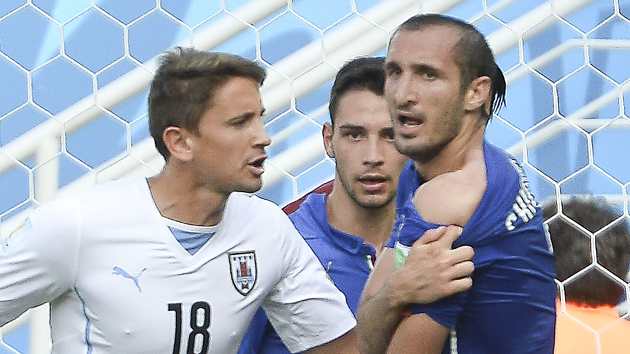 Giorgio Chiellini of Italy bares his shoulder to display apparent teeth marks after being bitten by Luis Suarez.Rex Features/AP

FIFA, soccer’s international governing body, has officially banned Uruguay striker Luis Suárez from the remainder of the World Cup for his alleged bite of Italian defender Giorgio Chiellini this week. And for good reason: Not only is biting another player incredibly unsportsmanlike and just plain dirty; it’s also extremely dangerous.

Human bites are notoriously dangerous because of their high rate of infection.

Of all the bites you can get—nearly 1 percent of emergency room visits are due to mammalian bites of various kinds—the human one is “particularly notorious,” as one study puts it, due to the risk of subsequent infection. Ten percent of human bites that break the skin become infected, quite a high number in comparison with infection rates generally. For example, in a recent study of 297 emergency room patients with lacerations, the infection rate was only 3.4%.

That’s because, to put it bluntly, we have pretty dirty mouths. Human saliva contains some 50 species of bacteria—and 100 million microbes of them per milliliter. There are even reports in the scientific literature of serious diseases resulting from human bites and their subsequent infections, including hepatitis, herpes, and tetanus. (There is even one report of a patient contracting HIV from a bite to the lip.)

The placement of Luis Suárez’s bite was relatively rare: the shoulder. More than half of human bites are on the hands and fingers; only about 18 percent are to the head and neck. One of the most common bite scenarios: One person punches another in the mouth, connects with his teeth, and ends up with a hand wound. One 2003 study found that of emergency room patients arriving with infected human bites, 70 percent were young men, and fifty-six percent of the bites were “clenched fist injuries.”

These so-called “fight bites,” says another 2002 study, are “notorious for being the worst of human bites.” That’s because they can infect certain hand tendons and joints that have “a very limited ability to fight infection.” The authors warn that “significant morbidity can result from late presentation or inadequate initial management” and that “the emergency physician needs to remain vigilant for complications associated with the closed fist injury.”

The research literature also notes that “patients with bite injuries are often intoxicated, making the process of obtaining a reliable history and conducting a thorough examination difficult.” Luis Suárez does not appear to have been drunk, though; and FIFA has a lot of videotape. It does not look like his bite broke Chiellini’s skin, but if it did, let’s hope he gets some very careful medical care.

We discussed the science of the human bite in more detail on the latest episode of the Inquiring Minds podcast: