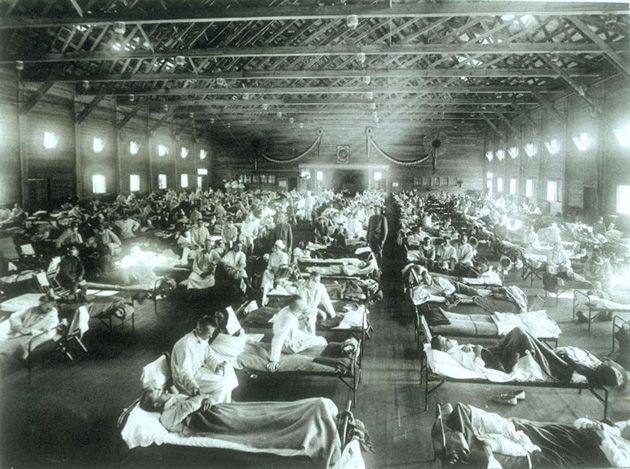 Flu-stricken soldiers at Camp Funston in Kansas. US Army/Wikipedia

Remember the Spanish Flu of 1918? Of course you don’t. That’s the freakishly deadly influenza strain that swept the globe in 1918 and 1919, wiping out 30 million to 50 million people. It infected about one in four Americans and killed about 675,000. It didn’t just kill little kids and the elderly, either, like most flu strains. This one was unusually devastating in young, healthy people—although why the “mother of all pandemics” behaved as it did is not fully understood.

“This is a risky activity, even in the safest labs.”

This week, Yoshihiro Kawaoka, an influenza researcher at the University of Wisconsin-Madison (which happens to be my hometown), published a new study—”Circulating Avian Influenza Viruses Closely Related to the 1918 Virus Have Pandemic Potential.” It describes the creation of a highly pathogenic flu virus that varies by just 3 percent from the Spanish Flu. “To assess the risk of emergence of a 1918-like virus and to delineate the amino acid changes that are needed for such a virus to become transmissible via respiratory droplets in mammals, we attempted to generate an influenza virus composed of avian influenza viral segments that encoded proteins with high homology to the 1918 viral proteins,” he and his coauthors wrote.

Needless to say, some of Kawaoka’s scientific peers think he’s insane to do such a thing. As Harvard epidemiologist Mark Lipsitch told the Guardian, “I am worried that this signals a growing trend to make transmissible novel viruses willy-nilly, without strong public health rationale. This is a risky activity, even in the safest labs. Scientists should not take such risks without strong evidence that the work could save lives, which this paper does not provide.”

This isn’t the first time Kawaoka’s work has created a stir. I’ve written previously about how his lab and Ron Fouchier’s came under fire after they created potential pandemic flu strains that could be spread by air between ferrets—a reliable model for human-to-human transmission. Back in 2002, in fact, I telephoned Kawaoka to ask whether, in the wake of 9/11, he felt it might be dangerous to publish techniques for reconstituting killer viruses, as his lab had previously done. His response was prickly. “That has to be published,” he said. “That’s science. If you say you shouldn’t publish this or that, we should say you shouldn’t make knives or guns—or airplanes, because that was used as a weapon in September.”

It would require a high level of expertise to do the work, he argued, and a terrorist would first have to acquire the sequence. When I countered that the sequences were published, he said, “You can do it, but it would take forever.”

“People can do these experiments in their garage if they were sophisticated and they had a bit of money.”

Not so long these days, thanks to advances in equipment and methodology. “This is not rocket science,” the Nobel Prize-winning virologist Peter Doherty told me last year. “Anyone with a basic training in molecular virology can do these experiments. People can do it in their garage if they were sophisticated and they had a bit of money.” He added: “We published the sequence of the resurrected 1918 virus with very little controversy around 2000, I think it was. Nobody made much fuss and it’s a deadly virus—anyone could’ve rebuilt that virus.”

It’s been done, actually. And now Kawaoka has come pretty darn close using using gene segments from modern viruses. “It’s madness, folly,” virologist Simon Wain-Hobson told the Guardian. “It shows profound lack of respect for the collective decision-making process we’ve always shown in fighting infections. If society, the intelligent layperson, understood what was going on, they would say ‘What the F are you doing?'”

The debate is no longer even about terrorism. It’s about whether the scientists themselves can keep these things in check. The risk here is accidental infection, perhaps from a laboratory mishap. The scientists who work with these viruses, Doherty assured me, are really top-level people working “under extraordinary security conditions.” And yet, shit happens. In a study published last May in the journal PLOS Medicine, Harvard’s Lipsitch calculated that “a moderate research program of ten laboratories at [high safety level] standards for a decade would run a nearly 20% risk of resulting in at least one laboratory-acquired infection, which, in turn, may initiate a chain of transmission.”

When the next terrifying flu emerges, we are at least more equipped to deal with it than we were back in 1918. “We’re incredibly better at monitoring it and reacting quickly,” Doherty says. “There’s a great global network of influenza centers, and the technology is infinitely better. A lot of people in 1918 probably died from secondary bacterial infections. We’ve got antibiotics to deal with bacteria, and so we’d do better there. Also, it looks as though we’ll be able to make a lot of flu vaccine very fast. At the moment, it takes us at least six months to get much out there.”

Then again, there’s this.

Clarification: At the suggestion of a reader, a PhD student in virology, I updated the story to note that the actual 1918 flu was reconstituted in a lab in 2005. Kawaoka created a similar virus using modern sequences. “To be honest, even after reading the paper I’m not sure why,” the student noted.