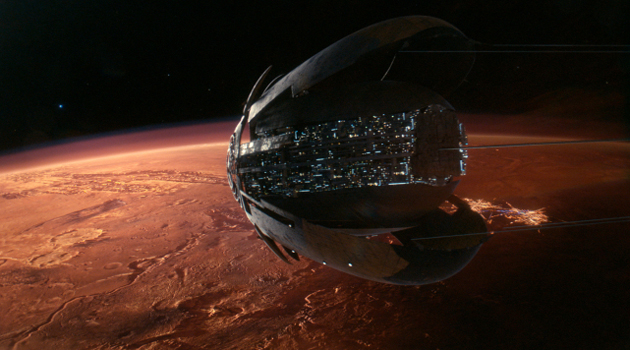 So now Cosmos has really done it.

The show had already enraged climate deniers by explaining just how big a problem global warming is. But clearly, it wasn’t done. On the latest episode, entitled “The Immortals,” host Neil deGrasse Tyson explores a grandiose theme if ever there was one: What it would take for our species to get off-world, as well as whether we’ll ever be able to successfully contact alien life. Both are, in effect, chances at immortality, since either our species—or at least the information we create and transmit into space—would thereby live on, perhaps even beyond the death of our sun.

But guess what: Both forms of immortality, according to the show, are threatened by factors that can disrupt the stability and the longevity of human civilization—and that includes human-caused climate change.

To understand how that could be so, you need to first understand something that loomed very large in the thoughts of Tyson’s predecessor, Carl Sagan, and that underlies this latest Cosmos episode: The Drake Equation. Derived by the astrophysicist Frank Drake, the equation is basically a formula for trying to determine how many technologically advanced civilizations there might be in the Milky Way galaxy, and how likely it is that our own civilization would be able to contact them. It looks like this (for much more detail, visit the SETI Institute):

N, the quantity we’re trying to identify, refers to how many civilizations there are in the Milky Way galaxy, that have reached a technological state whereby they can make radio transmissions into space, rendering them theoretically detectable by other civilizations on other planets. It is a product of these factors: R*, or how fast stars form that could support intelligent life; fp, how many of those stars, in turn, support planetary systems, like our own solar system; ne, how many planets in each of these solar systems could at least theoretically, due to their environment, support life; fl, how many of those planets turn out to be places where life indeed develops; and fi, or how many of those planets produce life that has intelligence.

Here’s a video of Sagan explaining the equation from the old Cosmos. Note that its final term (referred to above as L), for Sagan, is visually represented by a mushroom cloud—for civilizations that destroy themselves with nuclear weapons won’t last long enough to send radio signals into space for a very long period of time. Or as Sagan observes, some civilizations “might…snuff themselves out in an instant of unforgivable neglect.” They might blow themselves up.

The new installment of Cosmos has, in effect, replaced that mushroom cloud with a coal plant. Exploring the theme of civilizational collapse in a Jared Diamondesque vein, Tyson proceeds to look into all the factors that cause civilizations to fall away, thus in effect exploring that last crucial term in the Drake Equation, L (although the show does not mention the equation by name). Here, things like violence and war loom large, but so do major destabilizing environmental or climatic shifts. As Tyson puts it, “Whether or not we ever make contact with intelligent alien life may depend on a critical question: What is the life expectancy of a civilization?” 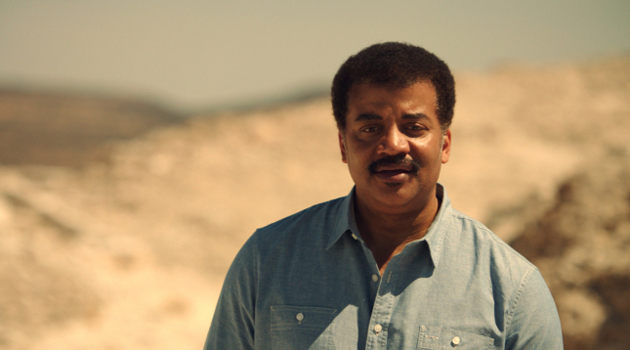 To illustrate this, the show focuses in particular on Mesopotamia of more than 4,000 years ago, home to some of the earliest writing, as well as myths that have lived on and achieved at least some modicum of immortality, like the epic of Gilgamesh. Yet the Mesopotamian civilization was done in by violence, as well as by environmental pollution (too much irrigation of farmlands with salt-laden water) and climate change, or more specifically, an epic drought. They thought it was a divine punishment. We know better…or do we?

Which brings us to our own civilization, a global one that is currently digging a deep hole of its own—climate change—which could threaten a major collapse. We might, unfortunately, be one of those “civilizations that self-destruct,” in Tyson’s words. Here’s Tyson’s big statement about it (you can watch the video here):

TYSON: In one respect, we’re ahead of the people of ancient Mesopotamia. Unlike them, we understand what’s happening to our world. For example, we’re pumping greenhouse gases into our atmosphere, at a rate not seen on Earth for a million years. And there’s scientific consensus that we’re destabilizing our climate. Yet, our civilization seems to be in the grip of denial, a kind of paralysis. There’s a disconnect between what we know, and what we do.

Being able to adapt our behavior to challenges is as good a definition of intelligence as any I know. If our greater intelligence is the hallmark of our species, then we should use it, as all other beings use their distinctive advantages, to help ensure that their offspring prosper, and their heredity is passed on, and that the fabric of nature that sustains us is protected. Human intelligence is imperfect, surely, and newly arisen. The ease with which it can be sweet talked, overwhelmed, or subverted by other hardwired tendencies, sometimes themselves disguised as the light of reason, is worrisome. But if our intelligence is the only edge, we must learn to use it better, to sharpen it, to understand its limitations and deficiencies. To use it, as cats use stealth before pouncing, as walking sticks use camouflage, to make it the tool of our survival. If we do this, we can solve almost any problem we are likely to confront in the next 100,000 years.

The show then ends by envisioning a better future, one in which we emerge from the cloud of denial, recognize our problems, and face and get past them. If we do that, and peer far enough ahead, Tyson notes that we can imagine a world in which “the last internal combustion engine is placed in a museum, as the effects of climate change reverse and diminish,” and in which “the polar ice caps are restored to the way they were in the 19th century.” And ultimately, one in which we get off world, explore the stars—and discover a fate that is no longer specifically tied to Earth alone. A form of immortality.

In other words, you might say that the latest Cosmos makes the grandest statement yet for why we had better do something about climate change. And here’s the thing: It looks, based on previews, like the next episode will focus even more deeply on the subject.

If anything can shift our culture towards a broader appreciation of science, then, this show may really be it.