Last April 17, an explosion at a fertilizer plant in West, Texas, killed 15 people, injured at least 200, and destroyed dozens of homes, schools, and a nursing home. In the wake of the disaster, we wondered: Can we locate the industrial sites in your community where similar incidents might occur?

The answer to that question, it turns out, is not so simple. Even basic information about sites where hazardous chemicals are kept and what kinds of accidents can be anticipated is tucked away in official documents. Much of that data is not easily accessible due to post-9/11 security measures, making it nearly impossible to get a clear sense of whether you live, work, or go to school near the next potential West, Texas.

Here’s what we do know: Millions of Americans live near a site that could put them in harm’s way if hazardous chemicals leak or catch fire. The Environmental Protection Agency monitors roughly 12,000 facilities that store one or more of 140 toxic or flammable chemicals that are potentially hazardous to nearby communities. In late 2012, a Congressional Research Service report found that more than 2,500 of these sites estimate that their worst-case scenarios could affect between 10,000 and 1 million people; more than 4,400 estimated that their worst-case scenarios could affect between 1,000 and 9,999 people.

The interactive map below, based on data from the EPA’s Risk Management Program, shows at least 9,000 facilities where a “catastrophic chemical release” or what the EPA calls a “worst-case scenario” could harm nearby residents. Hover over any site to see its exact location, the chemicals it stores, and how many accidents it documented in its most recent 5-year reporting period.

First, don’t let the facilities with no accidents fool you. Before its explosion last year, West Fertilizer’s EPA records showed that it had no mishaps. “A lot of facilities, even though they haven’t had any accidents, it doesn’t mean they aren’t capable of [one], and that the damage can’t be similar to what we’ve seen in West, Texas,” explains Sofia Plagakis, a policy analyst with the Center for Effective Government‘s environmental right-to-know program. “It only takes one accident,” says John Deans, a former toxics campaigner at Greenpeace.

And if you click on the West Fertilizer Co. plant in West, Texas, you won’t see any record of ammonium nitrate, the prime suspect in last year’s explosion. (The other suspect was anhydrous ammonia, which the EPA does monitor.) That’s because the chemical is not monitored under the EPA’s Risk Management Program. Almost every facility on the map above also stores a chemical whose name has been redacted. That information is only accessible if you visit one of 15 EPA Federal Reading Rooms scattered across the country. Basically, the data used to make this map can’t be used to predict the next West, Texas-style accident; it couldn’t even predict the first West, Texas, accident. 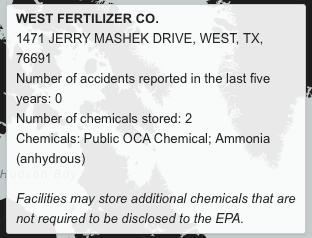 More data is out there, however. To find out more about where ammonium nitrate is stored, try the Department of Homeland Security, which monitors facilities that keep the chemical under its Chemical Facility Anti-Terrorism Standards program. Yet DHS never knew about West Fertilizer, even though the plant told state agencies in 2012 that it stored 540,000 pounds of ammonium nitrate, about 1,350 times the amount that triggers the reporting requirement. While West Fertilizer didn’t report to DHS, it did disclose its ammonium nitrate storage to Texas’ emergency planning committee in a federally required report that’s meant to help firefighters, hospitals, and other first responders prepare for an accident.

If you’re confused, you’re not alone. Disparate government data sets and patchy oversight have raised more questions about chemical risks than regulators or citizens can answer. In the wake of the West, Texas, tragedy, the Obama administration promised to address these knowledge gaps and issued an executive order, calling for agencies such as DHS and the EPA to improve their info sharing with state agencies and local responders.

Other organizations have tried to determine which chemical plants pose the greatest risks to nearby residents. In 2011, Greenpeace’s Deans and his team set out to find some answers in the EPA data. But publicly accessible risk data doesn’t say exactly how close facilities are located to communities, how many people live in those communities, or what kinds of damage an accident might cause. The West Fertilizer explosion destroyed or irreparably damaged three of the town’s four schools. Had the accident happened during the day, Plagakis asks, “Did the school know how to get the students out of harm’s way?”

Facilities are supposed to report this information to the EPA, but these Offsite Consequence Analyses are not included in the agency’s response to public records requests for risk management data. You can access this information at an EPA Federal Reading Room. But you’re allowed one visit per month and can only bring a pen and paper. Greenpeace dispatched about a dozen researchers to the reading rooms for this project, Deans says.

When it was done, Deans’s team had identified 473 chemical facilities that could put 100,000 people or more at risk. “Of those,” they found, “89 put one million or more people at risk up to 25 miles downwind from a plant.” In all, Greenpeace concluded, one out of every three Americans was at some risk of being affected by a toxic chemical release from a nearby facility.

Chemical Sites That Put 100,000 or More People at Risk

Still, the West Fertilizer plant, which is in a town of 2,800 people, does not show up on this map. As mounting evidence pointed to ammonium nitrate as the likely culprit in the West Fertilizer explosion, a team of Reuters reporters started looking for other ammonium nitrate facilities across the country to see if they could pinpoint other potentially risky locations. It found hundreds of thousands of homes, hundreds of schools, and 20 hospitals within a mile of sites that store or use the chemical.

According to news reports, there are roughly 6,000 facilities that store ammonium nitrate at levels that should report to Homeland Security. DHS never returned calls to verify this number, and it does not publicize the ammonium nitrate facilities it tracks under its Chemical Facility Anti-Terrorism Standards program. Federal law mandates that any facility storing at least 10,000 pounds of ammonium nitrate disclose it to local emergency planning authorities. To track down these reports, you have to ask your state for it. Some states, like Illinois, make the information easily accessible online. Others, like Arizona, have denied public requests to see the the documents. Reuters requested these Tier II reports from environmental, public safety, and emergency response agencies in all 50 states: 29 states released the information, 10 states did not respond or did not have electronic data, and 11 refused altogether.

“The states that declined often wanted us to request information about a specific site,” says Ryan McNeill, one of the Reuters reporters who worked on mapping the ammonium nitrate facilities. “They claim that’s what the law intended. Our counter was that this is a silly position because it requires a citizen to know about the existence of a site with dangerous chemicals before they can request information. How is the public supposed to know whether a warehouse houses dangerous chemicals?”