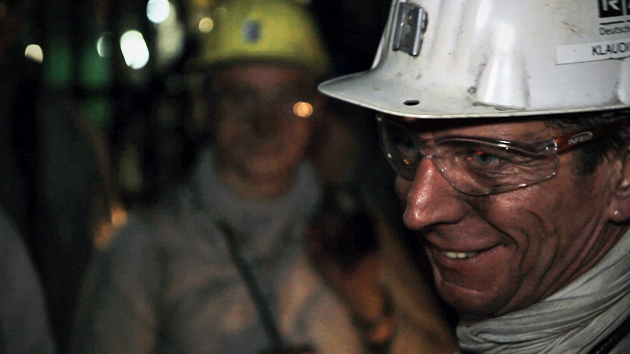 A miner at Prosper HanielTim McDonnell

Germany is in the midst of a fierce battle against climate change and is making an aggressive push to get at least 80 percent of its power from renewable sources by 2050. But with nearly half its power still drawn from some of the world’s dirtiest coal, there are plenty of bumps in the road ahead. One of the biggest is how to store renewable energy when the wind isn’t blowing and the sun isn’t shining, a problem that has tormented clean-energy advocates around the globe.

One engineer thinks he’s found the solution—half a mile underground.

Most of Germany’s coal is a low-grade form called lignite, which is dug out of sprawling open-pit mines and fed into carbon-spewing power stations. Lignite is dirtier than the hard coal more commonly found in the United States in places like Wyoming and West Virginia. Germany has its own hard coal, too—Steinkohle, in local parlance—but costs for the deep-shaft mines needed to get at it run so high that the industry has historically relied heavily on federal subsidies. Those are set to expire in 2018, and when they do, they’ll take Germany’s three remaining hard-coal mines with them.

One of these mines is Bergwerk Prosper Haniel, about an hour outside the bustling northwestern city of Cologne. It’s a stark contrast from the open-pit lignite mines that consume entire landscapes: The squat industrial building where I meet André Niemann, an engineering professor at the nearby Universität Duisburg-Essen, looks like any small factory and gives no hint that it sits atop one of the deepest hard-rock mines in the world.

We climb into a rattletrap elevator and drop down into the mine as Niemann describes his plan to turn the tunnels beneath us into a giant experiment in clean energy. (Watch the video below for an inside tour of the mine.)

Engineers across the globe are scrambling to design batteries that could soak up extra power and feed it back at night or on windless days. And four US states are scrambling to get picked as the site of a $5 billion battery factory Tesla plans to break ground on later this year.

But traditional batteries aren’t the only option. So-called “pumped storage” uses renewable energy that isn’t needed at the time it’s produced to pump water into an elevated reservoir; to get the power back later on a cloudy or windless day, the water is drained back downhill through turbines, turning the whole system into a huge hydraulic battery. This illustration shows how the system works:

The basic idea isn’t new: There are a number of these systems spread across the world already, including a few in Germany and several in the United States, that together account for nearly all existing bulk energy storage capacity. But Niemann would be the first to build one out of a coal mine, using Prosper Haniel’s preexisting, 18-mile network of tunnels.

With hard coal in its waning hours, Niemann says, “now we have access to this deep ground.”

His plan is still on the drawing board; until its closure in 2018, Prosper Haniel will continue to pump out 4 million tons of coal per year. But working with the company that owns the mine, RAG, Niemann wants to coat the tunnels’ grimy walls in concrete and fill the place up with water—up to 35 million cubic feet of it, roughly the volume of the Empire State Building.

Renewable power would pump some of the water back to the surface, and then gravity would take care of the rest, draining the water back into the mine through an energy-producing turbine. Altogether, the system would have enough storage capacity to power up to 410 typical German homes.

Niemann thinks projects like this could be adopted widely to repurpose unused facilities, to build a new energy system on the framework of the old.

“Times are changing,” he says. “Mining is temporary, but now we want to establish a permanent solution.”

This story was produced with the support of the Heinrich Böll Foundation.