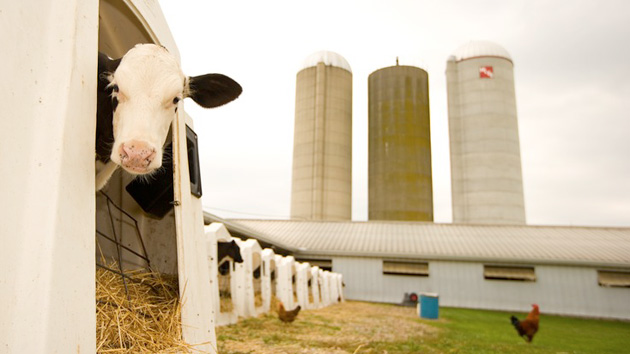 This story originally appeared on OnEarth.org.

Anyone who pays even scant attention to where our food comes from is likely aware that some pretty unsavory things happen between the farm and your fork (see this month’s big story in Rolling Stone, for example). But some of these farming methods are more than just unappetizing: they could be deadly. One practice in particular could allow for the spread of bovine spongiform encephalopathy, or BSE, the gruesome and fatal neurodegenerative disorder more commonly known as mad cow disease.

The practice in question is feeding what’s known as “poultry litter” to farmed cattle. Poultry litter is the agriculture industry’s term for the detritus that gets scooped off the floors of chicken cages and broiler houses. It’s mainly a combination of feces, feathers, and uneaten chicken feed, but in addition, a typical sample of poultry litter might also contain antibiotics, heavy metals, disease-causing bacteria, and even bits of dead rodents, according to Consumers Union (the policy and action arm of the nonprofit that publishes Consumer Reports).

Aside from the fact that we’re feeding our cows chicken crap, this practice is worrisome because both the excrement and uneaten pellets of chicken chow found in poultry litter can contain beef protein, including ground-up meat and bone meal. Which means—if you can follow the gruesome flow chart here—that cows could be, indirectly, eating each other.

As the US Department of Agriculture has made quite clear, cows really, really shouldn’t be doing that. Meat and bone meal containing infected bovine protein, the USDA says, is the chief culprit behind the spread of mad cow disease. (The closely related illness in humans is called variant Creutzfeldt-Jakob disease.)

The US Food and Drug Administration wisely banned the practice of feeding the remains of dead cows to living ones back in 1997. But the agency has never prohibited feeding those same remains to chickens and other poultry, nor does it currently prohibit feeding poultry litter to cattle. And so, thanks to this ghoulish quirk of our Rube Goldberg-like regulatory mechanism—call it the Feedlot Feedback Loop, or maybe the Feedlot Feedback Loophole—cows are still at risk of consuming the suspect bovine proteins that inspired the 1997 ban in the first place.

“I’ve always been against the feeding of poultry litter back to ruminants [cows and their cud-chewing cousins],” says Linda Detwiler, who served as the USDA’s head of mad cow surveillance from 1996 to 2002 and who has more than 25 years of experience working with the disease. “If there was contamination with the BSE agent—through either spilled feed or feed that passed through undigested—there could be a potential of exposure to cattle.”

Just how much poultry litter actually gets collected, processed, and fed to cows isn’t precisely known. In 1967, the FDA declared that poultry litter could be classified as an “adulterated” form of livestock feed, a designation that effectively prohibited its interstate shipment and greatly curbed its use for such purposes. But in 1980, at the dawning of Reagan-era deregulation, the agency stopped policing its use and ceded the issue of how to handle poultry litter to state agricultural agencies.

Those agencies, alas, haven’t done a very good job of regulating it since then. According to a survey conducted by the Food Animal Concerns Trust, a Chicago-based organization that advocates for the welfare of farm animals, 21 of 32 responding state agencies reported that they neither monitored nor maintained any data on the amount of poultry litter being used as cattle feed in their jurisdictions. The FDA has estimated that between 1 million and 2 million tons of it are fed to US cattle every year.

Aside from the fact that we’re feeding our cows chicken crap, this practice is worrisome because—if you can follow the gruesome flow chart here—it means that cows could be, indirectly, eating each other.

In early 2003, shortly after the first US cow infected with bovine spongiform encephalopathy was discovered in Washington State, the FDA responded to mounting public anxiety by announcing that it would ban the use of poultry litter as cattle feed. But once Big Ag stepped in, the agency suggested a different course of action. There was no need for a permanent ban, the FDA concluded: just a promise by chicken-feed manufacturers that they would leave out the riskiest, most infectious bovine tissues, mainly from brains and spinal cords. (If this sounds familiar, it’s probably because the FDA said yesterday that it is taking a similar voluntary approach to the overuse of antibiotics in livestock, another potential human health risk.) Such promises on poultry litter notwithstanding, Detwiler says risky bovine tissue could still make its way into chicken feed. “The FDA is not requiring all the infectious parts to be [taken] out.”

The FDA did not respond to OnEarth’s requests for comment on this story.

Why does Big Ag want to keep feeding poultry waste to cows? That’s an easy one: It’s plentiful, expensive to dispose of by other means, and relatively rich in protein (however disgusting a form that protein may take). Feeding it to ruminant livestock represents a win-win for beef producers and poultry producers—just not for cows, or for anyone who happens to eat beef and care about its safety.

Which is why in August 2009, more than a dozen national consumer and animal welfare organizations formally petitioned the FDA to put an end to this practice once and for all. They cited recent studies by researchers at Harvard highlighting the risks. They cited bans already in place in a number of countries: Australia, New Zealand, Canada, and the European Union member states among them. They poked holes in the logic used by the FDA to demonstrate poultry litter’s safety and to justify its continued use. The agency’s self-imposed deadline for responding to the petitioners was February 2010. Those petitioners are still waiting for an answer.

Michael Hansen, a senior scientist at Consumers Union, was one of the petition’s signers. He describes the FDA’s lack of a formal response as “appalling.” In a closed-door meeting with agency officials that he attended last summer, he recalls, those officials blamed the delay on the massive backlog of other petitions currently demanding the agency’s attention. When they were reminded of exactly how long—nearly four years—Hansen and others had been waiting for a response, the officials seemed unfazed, Hansen says. Their blasé attitude “makes no sense,” in his words, given that the FDA had already acknowledged the potential hazards of feeding poultry litter to cows when it announced plans to ban the practice back in 2004. (Again, this might sound familiar: it has taken the FDA more than 30 years to act on the well-known risk of antibiotics use in livestock.)

Detwiler, who left the USDA in 2003 and now works as a global consultant on mad cow issues, believes that the FDA’s inactivity reflects a dangerous complacency surrounding the contemporary incidence of the disease. Safeguards put in place after Europe experienced a string of mad cow outbreaks in the 1980s and 1990s have mitigated many risk factors, she said, but that doesn’t mean protective agencies can let their guard down—especially now that new, atypical strains of BSE have entered the picture.

Wait—what’s that? Well, here in the United States, all three cows confirmed to have contracted BSE since 2003 have tested positive for an atypical strain of the disease, as opposed to the more widely studied (and better understood) “typical” strain. USDA officials maintain that atypical BSE findings in cows are actually cause for less concern, not more, because these officials, along with some in the scientific community, believe these atypical strains can only occur spontaneously and are rooted in genetic defects, rather than contaminated feed.

Detwiler, Hansen, and other scientists say there’s simply not enough evidence to support that belief. And it would seem that they’re not alone: the US Centers for Disease Control and Prevention cautions that “transmission through feed or the environment cannot be ruled out.” What’s more, Detwiler and Hansen note, recent studies suggest that atypical BSE strains may be more virulent than the typical strain. “We have to be very careful,” Detwiler says. “I think scientists and public officials should point out that we still don’t know all there is to know.”

With only three US cases of BSE-infected cattle detected in the last decade, the USDA claims that our current safeguards are sufficient. But as Hansen notes, the agency tests only one-tenth of one percent of the roughly 35 million US cattle slaughtered annually. Given what we know about the presence of bovine tissue in poultry litter, and given what we don’t know about how atypical BSE is contracted, we should at least let caution and prudence offset some of the information gap.

Other countries have banned feeding poultry litter to cows “for quite good reason,” Hansen says. “These diseases don’t go away until you take strong measures.”