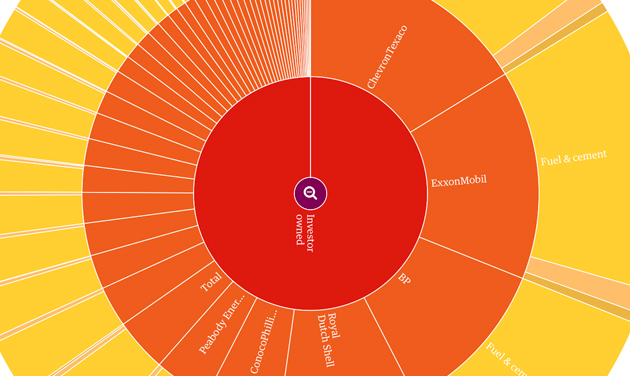 
This story first appeared on the Guardian website and is reproduced here as part of the Climate Desk collaboration.

The climate crisis of the 21st century has been caused largely by just 90 companies, which between them produced nearly two-thirds of the greenhouse gas emissions generated since the dawning of the industrial age, new research suggests.

The companies range from investor-owned firms—household names such as Chevron, Exxon, and BP—to state-owned and government-run firms.

The analysis, which was welcomed by the former Vice President Al Gore as a “crucial step forward” found that the vast majority of the firms were in the business of producing oil, gas, or coal, found the analysis, which has been accepted for publication in the journal Climactic Change.

“There are thousands of oil, gas, and coal producers in the world,” climate researcher and author Richard Heede at the Climate Accountability Institute in Colorado said. “But the decision makers, the CEOs, or the ministers of coal and oil if you narrow it down to just one person, they could all fit on a Greyhound bus or two.” 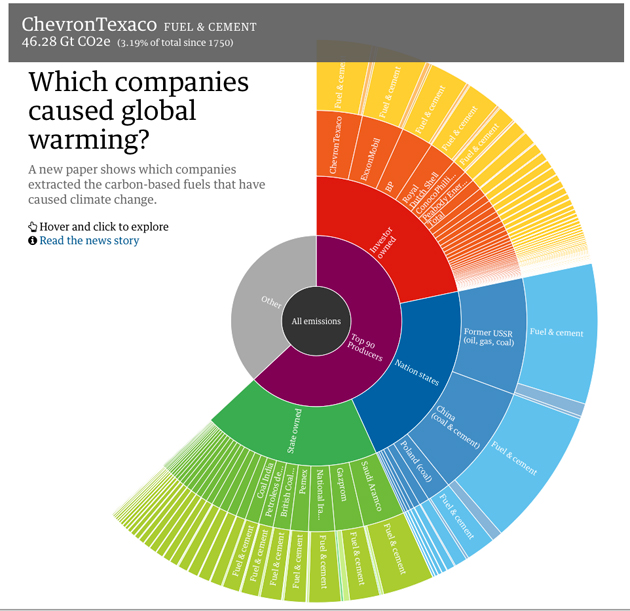 Click here to explore the Guardian‘s interactive roster of the companies behind climate change. via The Guardian

Half of the estimated emissions were produced just in the past 25 years—well past the date when governments and corporations became aware that rising greenhouse gas emissions from the burning of coal and oil were causing dangerous climate change.

Many of the same companies are also sitting on substantial reserves of fossil fuel, which—if they are burned—put the world at even greater risk of dangerous climate change.

Climate change experts said the data set was the most ambitious effort so far to hold individual carbon producers, rather than governments, to account.

The United Nations climate change panel, the IPCC, warned in September that at current rates the world stood within 30 years of exhausting its “carbon budget”—the amount of carbon dioxide it could emit without going into the danger zone above 2 degrees Celsius warming. Gore said the new carbon accounting could reset the debate about allocating blame for the climate crisis.

Leaders meeting in Warsaw for the UN climate talks this week clashed repeatedly over which countries bore the burden for solving the climate crisis—historic emitters such as the United States or Europe or the rising economies of India and China.

Gore said the analysis underlined that it should not fall to governments alone to act on climate change.

“This study is a crucial step forward in our understanding of the evolution of the climate crisis. The public and private sectors alike must do what is necessary to stop global warming,” he told the Guardian. “Those who are historically responsible for polluting our atmosphere have a clear obligation to be part of the solution.”

Between them, the 90 companies on the list of top emitters produced 63 percent of the cumulative global emissions of industrial carbon dioxide and methane between 1751 to 2010, amounting to about 914 billion metric tons CO2 emissions, according to the research. All but 7 of the 90 were energy companies producing oil, gas, and coal. The remaining seven were cement manufacturers.

Some 31 of the companies that made the list were state-owned companies such as Saudi Arabia’s Saudi Aramco, Russia’s Gazprom, and Norway’s Statoil.

Nine were government-run industries, producing mainly coal in countries such as China, the former Soviet Union, North Korea, and Poland, the host of this week’s talks.

Experts familiar with Heede’s research and the politics of climate change said they hoped the analysis could help break the deadlock in international climate talks.

“It seemed like maybe this could break the logjam,” said Naomi Oreskes, professor of the history of science at Harvard. “There are all kinds of countries that have produced a tremendous amount of historical emissions that we do not normally talk about. We do not normally talk about Mexico or Poland or Venezuela. So then it’s not just rich v. poor, it is also producers v. consumers, and resource rich v. resource poor.”

Michael Mann, the climate scientist, said he hoped the list would bring greater scrutiny to oil and coal companies’ deployment of their remaining reserves. “What I think could be a game changer here is the potential for clearly fingerprinting the sources of those future emissions,” he said. “It increases the accountability for fossil fuel burning. You can’t burn fossil fuels without the rest of the world knowing about it.”

Others were less optimistic that a more comprehensive accounting of the sources of greenhouse gas emissions would make it easier to achieve the emissions reductions needed to avoid catastrophic climate change.

John Ashton, who served as United Kingdom’s chief climate change negotiator for six years, suggested that the findings reaffirmed the central role of fossil fuel producing entities in the economy.

“The challenge we face is to move in the space of not much more than a generation from a carbon-intensive energy system to a carbon-neutral energy system. If we don’t do that we stand no chance of keeping climate change within the 2C threshold,” Ashton said.

“By highlighting the way in which a relatively small number of large companies are at the heart of the current carbon-intensive growth model, this report highlights that fundamental challenge.”

Meanwhile, Oreskes, who has written extensively about corporate-funded climate denial, noted that several of the top companies on the list had funded the climate denial movement.

“For me one of the most interesting things to think about was the overlap of large scale producers and the funding of disinformation campaigns, and how that has delayed action,” she said.

The data represents eight years of exhaustive research into carbon emissions over time, as well as the ownership history of the major emitters.

The companies’ operations spanned the globe, with company headquarters in 43 different countries. “These entities extract resources from every oil, natural gas, and coal province in the world, and process the fuels into marketable products that are sold to consumers on every nation on Earth,” Heede writes in the paper.

The largest of the investor-owned companies were responsible for an outsized share of emissions. Nearly 30 percent of emissions were produced just by the top 20 companies, the research found.

By Heede’s calculation, government-run oil and coal companies in the former Soviet Union produced more greenhouse gas emissions than any other entity—just below 8.9 percent of the total produced over time. China came a close second with its government-run entities accounting for 8.6 percent of total global emissions.

The historic emissions record was constructed using public records and data from the US Department of Energy’s Carbon Dioxide Information and Analysis Center, and took account of emissions all along the supply chain.