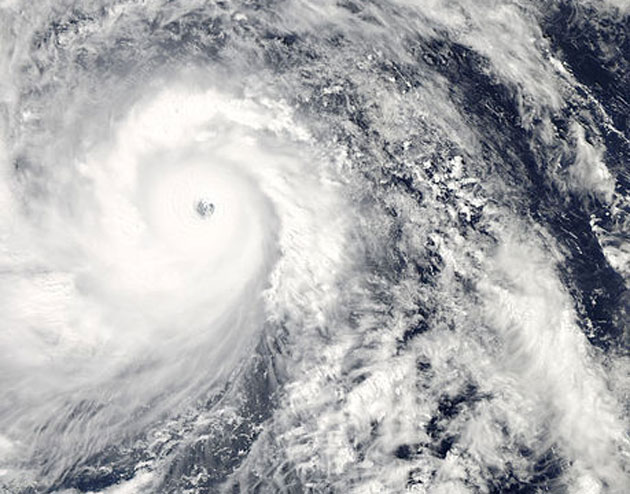 This story originally appeared on the Atlantic website and is reproduced here as part of the Climate Desk collaboration.

It will be months before we know the true damage brought about by super typhoon Haiyan. The largest death tolls now associated with the storm are only estimates. Aid workers from across the world are now flying to the island nation, or they just recently arrived there. They—and Filipinos—will support survivors and start to rebuild.

But they will be helped by an incredible piece of technology, a worldwide, crowd-sourced humanitarian collaboration made possible by the Internet.

What is it? It’s a highly detailed map of the areas affected by super typhoon Haiyan, and it mostly didn’t exist three days ago, when the storm made landfall.

Since Saturday, more than 400 volunteers have made nearly three quarters of a million additions to a free, online map of areas in and around the Philippines. Those additions reflect the land before the storm, but they will help Red Cross workers and volunteers make critical decisions after it about where to send food, water, and supplies.

These things are easy to hyperbolize, but in the Philippines, now, it is highly likely that free mapping data and software—and the community that support them—will save lives.

The Wikipedia of maps

The changes were made to OpenStreetMap (OSM), a sort of Wikipedia of maps. OSM aims to be a complete map of the world, free to use and editable by all. Created in 2004, it now has over a million users.

I spoke to Dale Kunce, senior geospatial engineer at the American Red Cross, about how volunteer mapping helps improve the situation in the Philippines.

The Red Cross, internationally, recently began to use open source software and data in all of its projects, he said. Free software reduces or eliminates project “leave behind” costs, or the amount of money required to keep something running after the Red Cross leaves. Any software or data compiled by the Red Cross are now released under an open-source or share-alike license.

While Open Street Map has been used in humanitarian crises before, the super typhoon Haiyan is the first time the Red Cross has coordinated its use and the volunteer effort around it.

How the changes were made

The 410 volunteers who have edited OSM in the past three days aren’t all mapmaking professionals. Organized by the Humanitarian OpenStreetMap Team on Twitter, calls went out for the areas of the Philippines in the path of the storm to be mapped.

What does that mapping look like? Mostly, it involves “tracing” roads into OSM using satellite data. The OSM has a friendly editor which underlays satellite imagery—on which infrastructure like roads are clearly visible—beneath the image of the world as captured by OSM. Volunteers can then trace the path of a road, as they do in this GIF, created by the DC-based start-up, Mapbox:

Volunteers can also trace buildings in Mapbox using the same visual editor. Since Haiyan made landfall, volunteers have traced some 30,000 buildings.

Maps, on the ground

How does that mapping data help workers on the ground in the Philippines? First, it lets workers there print paper maps using OSM data which can be distributed to workers in the field. The American Red Cross has dispatched four of its staff members to the Philippines, and one of them—Helen Welch, an information management specialist—brought with her more than 50 paper maps depicting the city of Tacloban and other badly hit areas.

Those maps were printed out on Saturday, before volunteers made most of the changes to the affected area in OSM. When those, newer data are printed out on the ground, they will include almost all of the traced buildings, and rescuers will have a better sense of where “ghost” buildings should be standing. They’ll also be on paper, so workers can write, draw, and stick pins to them.

Welch landed 12 hours ago, and Kunce said they “had already pushed three to four more maps to her.”

The Red Cross began to investigate using geospatial data after the massive earthquake in Haiti in 2010. Using pre-existing satellite data, volunteers mapped almost the entirety of Port-au-Prince in OSM, creating data which became the backbone for software that helped organize aid and manage search-and-rescue operations.

That massive volunteer effort convinced leaders at the American Red Cross to increase the staff focusing on their digital maps, or geographic information systems (GIS). They’ve seen a huge increase in both the quality and quantity of maps since then.

But that’s not all maps can do.

The National Geospatial-Intelligence Agency (NGA), operated by the US Department of Defense, has already captured satellite imagery of the Philippines. That agency has decided where the very worst damage is, and has sent the coordinates of those areas to the Red Cross. But, as of 7 p.m. Monday, the Red Cross doesn’t have that actual imagery of those sites yet.

The goal of the Red Cross geospatial team, said Kunce, was to help workers “make decisions based on evidence, not intuition.” The team “puts as much data in the hands of responders as possible.”What does that mean? Thanks to volunteers, the Red Cross knows where roads and buildings should be. But until it gets the second set of data, describing the land after the storm, it doesn’t know where roads and buildings actually are. Until it gets the new data, its volunteers can’t decide which of, say, three roads to use to send food and water to an isolated village.

Kunce said the US State Department was negotiating with the NGA for that imagery to be released to the Red Cross. But, as of publishing, it’s not there yet.

When open data advocates discuss data licenses, they rarely discuss them in terms of life-and-death. But, every hour that the Red Cross does not receive this imagery, better decisions cannot be made about where to send supplies or where to conduct rescues.

And after that imagery does arrive, OSM volunteers around the world can compare it to the pre-storm structures, marking each of the 30,000 buildings as unharmed, damaged, or destroyed. That phase, which hasn’t yet begun, will help rescuers prioritize their efforts.

OSM isn’t the only organization using online volunteers to help the Philippines: MicroMappers, run by a veteran of OSM efforts in Haiti, used volunteer-sorted tweets to determine areas which most required relief. Talking to me, Kunce said the digital “commodification of maps” generally had contributed to a flourishing in their quantity and quality across many different aid organizations.

“If you put a map in the hands of somebody, they’re going to ask for another map,” said Kunce. Let’s hope the government can put better maps in the hands of the Red Cross—and the workers on the ground—soon.