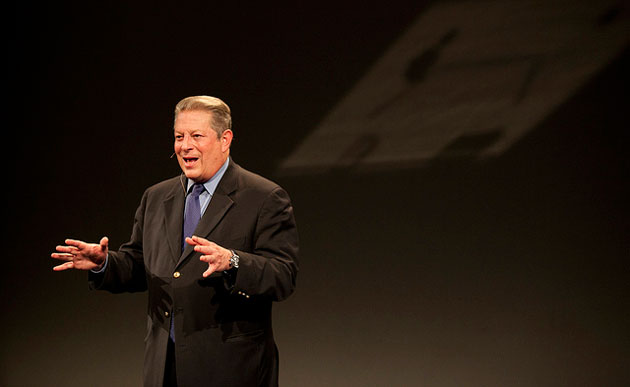 The world is on the brink of the “largest bubble ever” in finance, because of the undisclosed value of high-carbon assets on companies’ balance sheets, and investment managers who fail to take account of the risks are failing in their fiduciary duty to shareholders and investors, Al Gore and his investment partner, David Blood, have said.

“Stranded carbon assets” such as coal mines, fossil fuel power stations and gas-fuelled vehicle plants represent at least $7 trillion on the books of publicly listed companies, and about twice as much again is owned by private companies, state governments and sovereign wealth funds.

As the danger from climate change intensifies, and as rules on carbon and the introduction of carbon pricing in many parts of the world start to bite, these assets are expected to come under threat, from regulation and from the need to transform the economy on to a low-carbon footing. The “carbon bubble” has been identified by leading thinkers on climate change in recent years, but so far the findings have had little real effect on investor behavior.

Now Gore and Blood, the former US vice-president and ex-chief executive of Goldman Sachs, who are partners in the Generation Investment Management firm, have brought forward a four-point plan that they say will protect future investors. They are calling on companies, investors and regulators to identify the carbon risks in their portfolios; to demand of company managers and boards that the risks should be publicly disclosed; to diversify their investment portfolios to include low-carbon infrastructure such as renewable energy and electric vehicles; and finally to take their money out of fossil fuels and other high-carbon assets, or turn them into low-carbon assets—for instance, by installing carbon capture and storage units on power stations.

Gore told the Guardian: “This is potentially the largest bubble ever. If investors look in a clear-eyed, traditional risk management way, they can be in time to avoid it.” He said it was not feasible to wait for a global agreement on climate change, on the lines of the Kyoto protocol which he helped to forge in 1997, but that investors must take action sooner. He urged individual investors to demand that their pension companies or fund managers should seek to evaluate their exposure to carbon risk.

The highest carbon assets such as tar sands and dirty coal represent the highest immediate risk, but other infrastructure such as transportation and construction is also involved.

If the risks associated with high-carbon assets are not taken into account, Gore warned, the consequences for other assets—in a decade or more—could be dire. Those assets include “real estate, agricultural land and infrastructure” that is all at risk from the effects of climate change, and the value of which could plummet as the effects are increasingly felt in the form of floods, droughts and storms.

Gore compared the carbon bubble to the financial crisis of 2007-08, when the owners of assets such as sub-prime mortgages and credit agreements that were suddenly found to be worthless were “embarrassed that they did not see what was blindingly obvious in retrospect.”

As the risks of climate change have been well known for some years, Blood added that any fund managers failing to take them into account in investment risk strategies were “failing in their fiduciary duty” to their investors and shareholders. This could give rise to lawsuits in the future, though Blood said he hoped that could be avoided, if the report’s recommendations were followed. He said investors were currently finding “a false comfort in the status quo” by failing to factor in carbon risks and climate change.

New regulations on carbon are being brought forward in many countries, such as the US and China, though there have also been withdrawals from climate action, such as the demise of carbon trading in Australia.

The Generation report follows the publication of the Intergovernmental Panel on Climate Change‘s assessment of current global warming science, which set out a “carbon budget” of how much carbon dioxide we can continue to pump into the atmosphere before triggering dangerous levels of warming. By extrapolating from that, other scientists have suggested there could be as little as 30 years of burning fossil fuels before the threshold is reached. This suggests that many of the world’s remaining fossil fuel resources must be left unexploited if the climate is not to be put in danger, and prominent scientific and political leaders are increasingly calling for this to be recognized.

Gore and Blood’s recommendations could take a decade to complete, the partners admit, but they insist that the first steps at least should be undertaken urgently.

Blood said there were an increasing number of investors with a clear understanding of climate change, but added: “There needs to be more engagement.”

Gore and Blood founded Generation Investment Management in 2004, with the aim of pushing forward low-carbon finance and promoting alternatives to the fossil fuel economy.