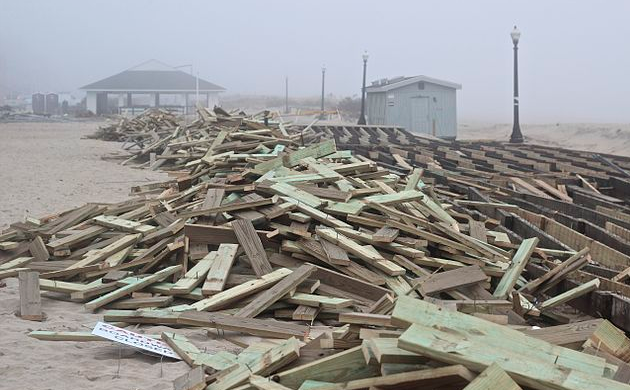 A photo of Hurricane Sandy taken from the International Space Station one year ago today.<a href="http://commons.wikimedia.org/wiki/File:Hurricane_Sandy_._The_Aftermath_(8244993403).jpg">Jacopo Werther</a>/Wikimedia

One year after Superstorm Sandy crashed into New York and New Jersey—leaving behind a dizzying price tag of $65 billion—the elected officials and bureaucrats charged with preventing the next weather disaster from doing that kind of damage still have a lot to accomplish.

The signs of this are everywhere. If another storm of Sandy-like proportions were to hit today, it would likely devastate parts of the New York City subway system. Hundreds of low-income New Yorkers without safe homes to return to are squatting in hotel rooms but facing eviction. Despite attempts to change the law, New York’s thousands of co-op dwellers are inellgibile for FEMA aid because of the way Congress classifies co-ops. And so on.

But we are also, a year after the storm, facing more sweeping failures: spending wrong, rebuilding wrong, and broadly forgetting some of Sandy’s biggest lessons. What follows is a look at some of these failures.

We still haven’t addressed climate change. Scientists have concluded that the sheer destructive force of Superstorm Sandy owed partially to climate change—and that climate change will probably contribute to a repeat disaster in the future. As Princeton University’s Michael Oppenheimer told the Associated Press, climate-change-triggered sea level rise caused flooding to reach 50,000 more people than it would have otherwise. A NOAA report released in September found that by the year 2100, floods like the ones caused by Sandy could become 1-in-20-year events.

And yet Congress hasn’t considered any serious climate change legislation since the storm. The Obama administration has introduced major new carbon emissions regulations, but industry interests and Republican allies have vowed to oppose them.

Even New Jersey Gov. Chris Christie, a firsthand witness to the storm’s devastation and one of few Republicans who acknowledges that climate change is real, pointedly refuses to grapple with policy questions surrounding global warming. Before the storm, he pulled New Jersey out of a regional initiative to curb greenhouse gas emissions and stripped a state clean energy fund of $900 million. He shows little interest in changing course. And in May, in reply to a question about the effects of climate change, Christie said that there was no proof that climate change had “caused” Sandy. “Maybe, in the subsequent months and years, after I get done with trying to rebuild the state and put people back in their homes, I will have the opportunity to ponder the esoteric question of the cause of this storm,” he said this February.

We’re rebuilding in places we shouldn’t. Regardless of whether we reduce our emissions, climate change has already guaranteed that the world will experience a rise in sea level of several feet; there won’t be a “new,” static coastline for centuries to come. This means that cities and towns on the shoreline are guaranteed an increase in flooding vulnerability. Some of the damage this will cause is inevitable. Many flood-prone portions of Manhattan, for example, are so dense that there’s no moving them. But other forms of damage are completely avoidable. (Perhaps you’ve heard about the New Jersey waterfront property owners who don’t want sand dunes obstructing their view.)

If it were up to him, says Bill Hooke, a senior policy fellow at the American Meteorological Society, the government would buy up the most vulnerable seaside properties and simply return them to nature. Of course, that isn’t what’s happening. “People are rebuilding like before,” he says. “And that’s a big issue.”

“People are rebuilding like before…And that’s a big issue.”

The state of New York has dedicated $400 million to buying out homeowners in flood-prone areas, but very few have taken advantage of the program. That’s partly because officials can’t just put money on the table and expect people to line up, says Irwin Redlener, director of the National Center for Disaster Preparedness. “The [program] in New York state is quite good. It recognizes something important, that there are some places we shouldn’t rebuild,” he says. “But you can’t just announce a buyout program…You have to have a very active program to give people assistance relocating. The relocation process itself is very, very complicated and traumatic for people.”

In New Jersey, Christie declined to improve upon a state regulation that forced rebuilding to take place at least one foot higher than FEMA’s new flood maps recommended—even though FEMA’s maps do not account for more frequent floods or an inevitable rise in sea level. By contrast, New York state, in accordance with the recommendations of climatologists and flooding experts, is requiring a two-foot margin of safety. Kenneth Miller, a Rutgers University geologist who tracks sea level rise, recently told NJ.com, “If I want my grandkids to be in my house, I would make sure that I was protected for 2 additional feet above FEMA recommendations.”

Rebuilding in these fragile areas requires enormous amounts of government resources. For example, restoring the entire coastline will require the Army Corps of Engineers to replace 27 million cubic yards of sand at a cost of around $3.5 billion—restoration efforts outside Ocean City, New Jersey, alone cost $14 million. In a perfect world, says Hooke, there wouldn’t be any more aid for shoreline property owners whose homes are destroyed by predictable disasters in the future. “The reality is, if you’ve got it, you’ve probably got to really afford to be able to rebuild it yourself,” he says.

We’re still terrible at recovery spending. Many of the sad Sandy anniversary stories you’ve read lately trace back to fundamental problems with how the federal government distributes natural disaster aid.

“You would think that we would have learned after many disasters, but particularly the ultimate lesson that was Katrina, that there needs to be a single agency to manage recovery in a community or region struck by a major disaster,” says Redlener. And yet, “every single time we have a big disaster, we are hampered by the lack of having a central authority overseeing the recovery.”

Ideally, Redlener says, a family whose house had been destroyed in a natural disaster would be assigned a single caseworker, and that caseworker would coordinate the family’s dealings with the banks that hold their mortgages and their private insurer, FEMA, federal and state aid programs, the Red Cross, and any other organizations disbursing aid. Instead, he says, people affected by disasters “have to become their own caseworkers. That is really problematic…There’s an unending cascade of challenges that would be overwhelming even to a family that was completely capable and resilient, much less people who have suffered the trauma and disruption that is part and parcel of being a part of a natural disaster on the scale of Sandy.” 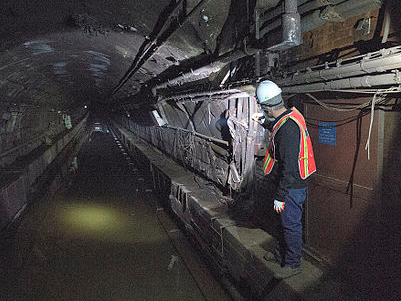 But the difficulty of addressing these issues, says Redlener, is that it’s not clear who has the authority to streamline all the different programs that crop up to help disaster victims. Questions about when FEMA can override city and state officials frequently plague disaster response and recovery—a key factor, Redlener says, exacerbating the New York fuel crisis that followed Sandy.

Redlener says that the fact that 85 percent of US infrastructure is privately owned can add to the challenge of bringing vital services back online. “The CEO of a hospital does not report to a mayor but to the board of directors,” he explains.

We don’t know where all that emergency money went. After Congress appropriated $51 billion for Sandy recovery efforts—in a process fraught with partisan rancor—the money began to travel to a host of government agencies for dispersal. That is where a slew of bureaucratic factors made moving, dispersing, and tracking the money “extremely confusing,” says Redlener.

“As far as we [at the National Center for Disaster Preparedness] can tell,” he says, “as of September 1, only 23 percent of the $50 billion from Congress has been obligated to some particular agency. And we can’t find evidence that more than 15 percent has been dispersed to [affected] people.”

The next disaster aid appropriations bill, he says, could establish a federal office of disaster recovery to oversee all funding streams. “If,” Redlener says, “Congress could take a breath and actually do something beneficial to the country. Then it could establish in times of emergency a way of centralizing the funds…Right now, if you keep the same system, you send some money to FEMA, to HUD, to HHS—it becomes very difficult to control where and how funds are being spent.”

At least we’ve got new flood maps. All that said, there have been positive steps toward preventing a repeat of what Sandy wrought.

In mid-June, FEMA released new, preliminary flood insurance maps for New York and New Jersey that show where homeowners will be required to pay for flood insurance or to elevate their homes. Until this year, flood insurance zones were dictated by data compiled in 1983. There are many benefits to the new data, says Redlener. For one, many people who find that they are now living in a risk zone really ought to be purchasing flood insurance. “That new data, built in to new risk maps, can really delineate where we want to be worried, versus where we want to rebuild,” he adds.

Still, the new maps have proven to be a double-edged sword. In many communities, they have had the effect of forcing residents who have never before needed to purchase flood insurance to either buy expensive policies or sell their homes—even if the chance that their property might be in the path of a catastrophic flood is only 1 in 100 (but rising) in any given year. At the same time, a law passed in July 2012, the Biggert-Waters Act, discontinues subsidized insurance rates for homeowners who live in the most severe flood risk areas. (Some members of Congress are attempting to delay the implementation of that legislation until the effects of rate hikes are better-understood.) A ProPublica investigation found that some homeowners stood to pay $9,500 for flood insurance annually—and that some of the new maps were outright wrong.

Portions of a $20 billion program designed by Mayor Michael Bloomberg’s administration will go toward designing flood infrastructure in New York—like flood walls and levees—that will mitigate the most astronomical increases in flood insurance premiums. But the plan has no clear timeline, much to the dismay of businesses and homeowners facing higher premiums, and it faces a budget shortfall.