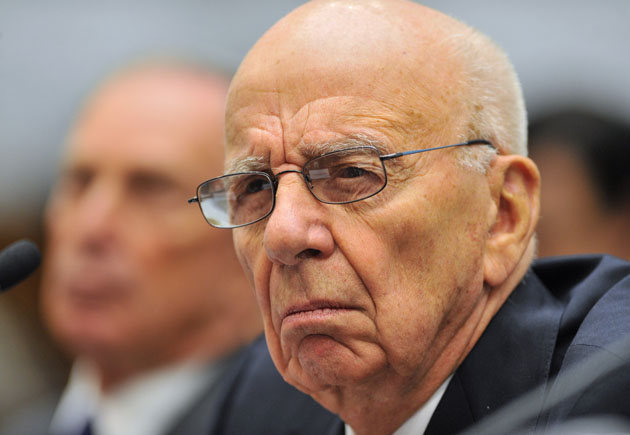 This story first appeared on the Slate website and is reproduced here as part of the Climate Desk collaboration.

I recently posted yet another debunking of a climate change denial post. The claims made by the writer, David Rose, were not just flatly wrong, but actually ridiculous. He quoted scientist Myles Allen grossly out of context (confirmed by Allen himself), making it seems as if Allen were saying something he wasn’t. He compared two measurements that were not at all comparable, making it seem like other scientists didn’t know what they were doing. And he made a pile of other easily disproven statements that didn’t come within a glancing blow of reality.

I’ll admit: It’s no fun writing about this kind of thing. I hate it. I hate having to do it. I’d much rather be writing about galaxies and Saturn and supernovae, and it’s depressing to wake up in the morning and see yet another nonsensical article that I know will get repeated endlessly in the deny-o-sphere echo chamber.

But that’s precisely why I have to slog through it. The more people who can show these claims for what they are—wrong, willfully or otherwise—the better.

Why? Because, sadly, the people who deny the reality around them have a very large megaphone, and in some cases have a lot of motivation to use it. Money, power, riling up the electorate, or, perhaps worst of all, pure zealotry. Nothing is as impenetrable as an armor wrought from fervent ideology.

It’s also upsetting to know that we have the facts, the science, the scientists, and really all of reality on our side. But human nature is a contrary beast, and doubt is a seed that grows lushly in dark places.

It is also easily fed and nurtured, needing only a handful of voices to grow. These voices are legion.

As a first example, take Rupert Murdoch, the billionaire owner of News Corp, Fox, and many newspapers. This bastion of far-right thinkery recently tweeted this:

I assume he meant to write “fracking” and not “tracking”. Either way, though, what he’s saying is pure fertilizer. As I have explained, September of last year saw historically low levels of Arctic sea ice. This year, the amount of sea ice was far, far below normal, but the extent was more than the devastatingly low amount of last year’s record. Murdoch calling that a record increase, like it’s a good thing, is garbage. It’s like getting pneumonia a month after a nearly fatal heart attack, and having someone tell you your health is great now.

Rupert Murdoch has a half million followers on Twitter, incidentally, and obviously his opinions can reach far more people through his media holdings. He may spew nonsense, but it’s nonsense that gets spread far and wide.

Then there’s Joe Kernen, co-host of CNBC’s show “Squawk Box” and someone who flatly denies climate change is real. He recently went on a tirade on Twitter, getting basic facts completely wrong and being intractably truculent about it. Here’s just one example; talking about carbon dioxide levels in the atmosphere, he said:

“@climatebrad it’s still 0.04%. Does that sound like a lot to you? So tiresome, the same faux drivel over and over.”

That’s right, he thinks CO2 isn’t a big deal because it’s a tiny fraction of the total content of our air. To people who understand reality, yes, 0.04% does sound like a lot, because we understand how the greenhouse effect works. If Kernen thinks 0.04% isn’t a lot, would he drink a glass of water that was 0.04% arsenic? I wouldn’t: That’s hundreds of times the minimum lethal dose. How about if that water contained 0.04% botulinum? A microgram of that protein is deadly. A level of 0.04% in a glass of water would be millions of times the lethal dose.

Dose makes the poison, as doctors say. It doesn’t matter what the amount sounds like. What matters is what it can do. In this case, CO2 makes it hotter, and it doesn’t take much in our air to do that. That is a fact.

Having shown examples from business and TV, let me now bring up a third: politics. Perhaps you’re familiar with Rep. Dana Rohrabacher (R-Calif). He has said outright he doesn’t think carbon dioxide causes global warming, a denial of science so basic it’s essentially the same as saying the Earth is flat.

Given that, perhaps it’s no surprise that his Twitter feed is a firehose of science denial, much of which is self-contradictory. For example, he says warming isn’t real and that it’s a fraud (which he’s repeated), but somehow this unreal fraudulent warming is caused by the Sun. It’s astonishing.

Mind you, Rohrabacher is Vice Chairman of the Science, Space and Technology Committee. He has real, actual power to enact or crush policy on climate change*.

I’ll add one bonus example. There are many to choose from, including the Koch Brothers, various think tanks, and other politicians. But there’s one fish in this barrel that exemplifies what I mean by “the echo chamber”.

It hardly needs saying that Rush Limbaugh is an endless source of misinformation. But I want to point out a specific example. On Sep. 8, 2013, The Mail on Sunday posted the error-laden article by David Rose talking about Arctic sea ice recovering from last year’s record low. The very next day, on his radio show, Limbaugh was talking about the Syrian civil war. He talked about the claim that the war is in part due to severe drought in that area caused by global warming:

[The claim is that the Syrian civil war] wouldn’t be happening at all and there would have been the use of chemical weapons if it weren’t for global warming. The only problem with that is that the Arctic Ice Sheet is at a record size for this time of year. They told us the ice was melting in the Arctic Ice Sheet. It’s not. There’s a record amount of ice, in the modern era, for this time of year.

Limbaugh took Rose’s misleading claims about Arctic sea ice, and then made them even wronger by saying the ice was at record size for this time of year. That is complete and utter bilge. The extent of sea ice for September 2013 was far lower than the 1981-2010 average, by two standard deviations (think of a standard deviation like a letter grade; if the average is a C, then this year’s ice level is an F). The actual sea ice “death spiral” is dramatic, scary, and all too real.

And that is precisely why we must keep being vocal, keep fighting this kind of nonsense. Because it’s bad enough all by itself, but it gets self-amplified by the deniers until it no longer resembles anything close to reality. Yet their audience will still listen. And their audience is vast.

Still. They may be louder, but we are greater in number. We do have the facts, but facts cannot speak for themselves. They need an advocate, and it’s up to all of us to speak for them.

[Note: The National Center for Science Education is one of the good guys in this, and a very important asset. I strongly endorse them, and they accept donations and memberships.]

* I must add here that Rep. Rohrabacher is an advocate of private space endeavors, as I am. But on essentially everything else in the Universe we are polar opposites.