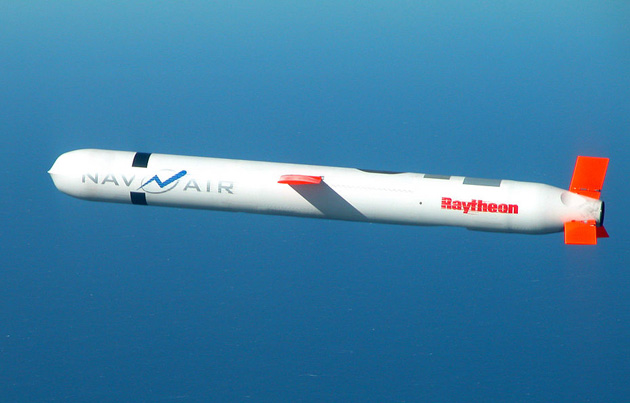 Of all the business opportunities presented by global warming, Raytheon Company may have found one of the most alarming. The Massachusetts-based defense contractor—which makes everything from communications systems to Tomahawk missiles—thinks that future “security concerns” caused by climate change could mean expanded sales of its military products.

Raytheon, it should be noted, isn’t exactly gunning for catastrophic global warming. Quite the opposite, in fact: In February, the company received a “Climate Leadership Award” from the Environmental Protection Agency for publicly reporting and aggressively reducing its greenhouse gas emissions. It’s working on renewable energy technologies. And it has publicly warned of significant climate-change-related risks to its business—from things like hurricanes, floods, droughts, and forest fires.

Raytheon anticipates “demand for its military products and services as security concerns may arise…as a result of climate change.”

So it’s particularly striking that these very same climate-induced disasters could also have a financial upside for Raytheon. Like many other companies, Raytheon regularly submits information to the nonprofit Carbon Disclosure Project about its carbon reduction efforts and how climate change could affect its business. In response to a question about climate-related opportunities, Raytheon wrote [registration required] last year that “expanded business opportunities are likely to arise as consumer behaviour and needs change in response to climate change.”

What kind of business opportunities? Raytheon cites its renewable energy technologies, weather-prediction products, and emergency response equipment for natural disasters. But the company also expects to see “demand for its military products and services as security concerns may arise as results of droughts, floods, and storm events occur as a result of climate change.”

The document says that these extreme weather conditions could have “destabilizing effects” and that on an international level, “climate change may cause humanitarian disasters, contribute to political violence, and undermine weak governments”:

Recent actions and statements by members of Congress, members of the UN Security Council, and U.S. military officers have drawn attention to the consequences of climate change, including the destabilizing effects of storms, droughts, and floods. Domestically, the effects of climate change could overwhelm disaster-response capabilities. Internationally, climate change may cause humanitarian disasters, contribute to political violence, and undermine weak governments. Customers’ needs are changing as the world transitions to a low-carbon economy where energy efficiency, renewable energy, and highly efficiently energy delivery becomes paramount. Expanded business opportunities will arise to Raytheon as a result of these security concerns and the possible consequences.

Raytheon says in the document that these opportunities are “very likely” to occur 6 to 10 years down the road, but the company doesn’t specify which military products in particular it thinks could become more popular. Jon Kasle, a Raytheon spokesperson, declined to elaborate on specific, future business opportunities, citing “competitive and other reasons.” Kasle did highlight Raytheon’s work on the Joint Polar Satellite System—a National Oceanic and Atmospheric Administration program to monitor environmental and weather conditions. In addition, Kasle cited a mobile air traffic control system, recently purchased by the US Air Force, that he noted “could be used in humanitarian missions such as supporting recovery from a hurricane, flood, or other natural disaster.” Raytheon’s website suggests it could be useful on a “remote battlefield,” as well.

A recent study noted that “some forms of intergroup violence…tend to be more likely following extreme rainfall conditions.”

Raytheon certainly isn’t alone in contemplating the potential for climate-related conflict. Recently, a group of researchers published a paper in Science concluding that global warming could substantially increase the frequency of violent conflict. The paper, which surveyed dozens of academic studies, noted that “some forms of intergroup violence, such as Hindu-Muslim riots [in India]…tend to be more likely following extreme rainfall conditions” and that low water availability, very low temperatures, and very high temperatures “have been associated with organized political conflicts in a variety of low-income contexts.” That may be happening in Syria, where some experts believe that a severe drought helped spark the country’s bloody civil war.

Raytheon also isn’t the only defense contractor thinking about both the risks and opportunities associated with government responses to a warming world. Boeing, for example, says in a Carbon Disclosure Project report that its business could be impacted by the US government’s “increasing focus” on renewable energy. And Lockheed Martin states that the reputational boost from its efforts to reduce carbon emissions could help it win defense contracts.