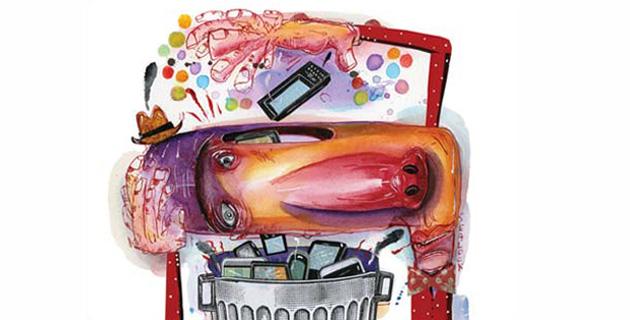 Years ago, someone stole my very first cellphone (a flip model with—get this—an antenna) out of my bag on the New York City subway. I despaired. As a grad student, I was chronically broke and couldn’t afford a replacement. Luckily, a generous friend gave me an old phone unearthed from his desk drawer. I got a new SIM card, switched it into my friend’s handset, and added my contacts. Problem solved.

It wouldn’t be so simple these days. In the mid-’90s, wireless companies began to place digital locks on their phones so that consumers couldn’t transfer them to a new carrier. It’s relatively easy to unlock a phone—you can download the necessary code for a few bucks. But as of January 26, under the Digital Millennium Copyright Act (DMCA), you can no longer do this legally. The 1998 law, aimed mostly at curbing digital piracy, also outlawed cellphone unlocking, but the US Copyright Office had always granted an exemption since unlocking phones really has little to do with copyright. The wireless industry didn’t like that—it argued that because carriers often subsidize the cost of phones, it’s not fair to let customers take their device to a competitor.

The Copyright Office has apparently embraced that argument: This year, for the first time, it denied the usual requests by organizations and individuals to extend the exemption. Consumer advocates are now fuming over what Jennifer Granick, director of civil liberties at Stanford University’s Center for Internet and Society, calls “a huge and expensive inconvenience.”

But there’s another reason the unlocking ban is a bad idea: It stifles the secondary phone market—which, of course, is just what phone companies want. “If a person purchases a used handset, they will not be purchasing a subsidized handset from the carrier and signing a two-year contract,” explains James Mosieur, director of a reuse charity called the 911 Cell Phone Bank.

If you can’t resell your locked phone, then what can you do with it? People keep their phones for an average of only 18 months. And according to the EPA, of the 152 million mobile devices officially discarded by Americans in 2010, just 11 percent were recycled. The rest (not counting the ones languishing in kitchen junk drawers or e-waste warehouses) ended up in landfills, where they can leach hazardous materials, including lead, copper, and flame-retardant chemicals.

The guts of smartphones also contain dozens of elements obtained by environmentally dicey mining and refining processes, including “rare earths” that leave behind radioactive tailings. Kyle Wiens, cofounder of iFixit, the electronics reuse company profiled in our November/December 2012 issue, estimates that a billion cellphones are sitting unused in closets and desks around the world. “And that’s when it was legal to unlock them. You can imagine that it’s only going to get worse.”

Representatives from Verizon, AT&T, and Sprint all told me that the ban wouldn’t affect their customers, since they are willing to grant exceptions to individuals “in good standing” whose accounts have been open for a few months. “The problem,” Mosieur points out, “arises when a device has been obtained legally from its rightful owner through a recycling program, a trade-in program, a neighbor, eBay, Craigslist, etc., and cannot or will not be unlocked by the carrier because the current owner is not the original account holder.”

None of the providers I talked to would cough up details about the number of unlocking requests they receive and grant. Nor would they comment on what the unlock ban might mean for organizations that repurpose old phones for sale in the developing world. What would happen, I asked them, if they got a bulk request to unlock thousands or even millions of phones for a good cause? Crickets. The best answer I got was from Verizon’s Brenda Raney, who emailed me to say the company doesn’t comment on “speculative scenarios.”

In March, a coalition that includes the Electronic Frontier Foundation, Reddit, and the popular website BoingBoing petitioned Congress to permanently exempt cellphones from the DMCA. Legistators from both sides of the aisle have introduced bills and the White House supports the idea. Yet so far none of the legislation has made it out of committee—thanks, no doubt, to the clout of the wireless industry, whose annual revenues of $196 billion dwarf those of agribusiness and auto manufacturing. In 2012, the CTIA, a trade association that lobbies for the major carriers, spent more than $12 million pressing Congress on various issues, while individual carriers and phone manufacturers unleashed well over $30 million. (Backers are most optimistic about a new bill from California Rep. Zoe Lofgren that would address the ban as part of a more significant DMCA fix.)

Wiens of iFixit says industry could take other steps, like putting repair manuals online, to keep phones out of landfill. But lifting the ban is “low-hanging fruit,” he adds—especially for pols who wants to please their constituents. “It’s amazing how popular these unlocks are.”