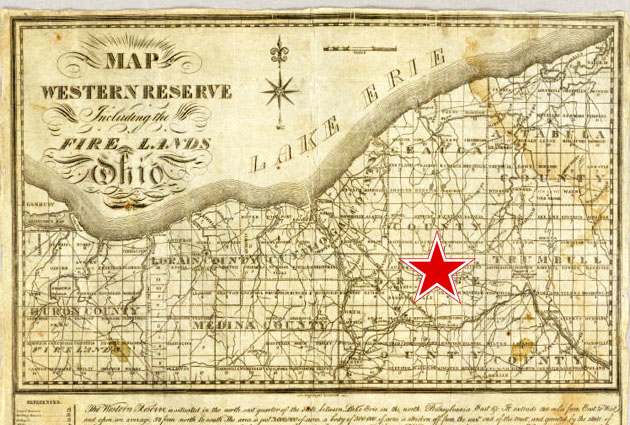 <a href="http://www.davidrumsey.com/maps1788.html">Map of the Western Reserve Including the Fire Lands in Ohio, by Allen Taylor, Nelson-Portage County, Ohio

Welcome to Portage County, Ohio, the biggest dumping ground for fracking waste in a state that is fast becoming the go-to destination for the byproducts of America’s latest energy boom.

As fracking—pumping a briny solution of water, lubricants, anti-bacterial agents, and a cocktail of other chemicals into underground shale formations at high pressure to fracture the rock and extract trapped natural gas—has expanded in the Midwest, so has the need for disposing of used fracking fluid. That fracking waste can be recycled or processed at wastewater treatment facilities, much like sewage. But most of the waste—630 billion gallons, each year—goes back into the ground, pumped into disposal wells, which are then capped and sealed. A bunch of it ends up underneath Portage County.

Nestled in the northeast corner of Ohio, about halfway between Cleveland and Youngstown, this 500-square-mile county pumped 2,358,371 million barrels—almost 75 million gallons—of fracking brine into 15 wells last year, driving enough liquid into the ground to fill a train of tanker cars that would stretch 37 miles. Most of the waste came from out of state.

According to the Akron Beacon Journal, almost 58 percent of the waste injected into Ohio wells is trucked in—much of it from Pennsylvania and West Virginia. More than 200 disposal wells dot the state, which has looser regulations than its neighbors. The Columbus Dispatch recently reported that Ohio injected just over 14 million barrels of fracking waste into disposal wells in 2012, and more than 8 million came from other states—an uptick of 19 percent from 2011. And despite Republican Gov. John Kasich saying he’s not thrilled about the amount of waste crossing state lines, federal commerce protections prevent the state from barring legal substances from being shipped in. Because Ohio regulates its own disposal wells, the waiting period to get approval to drill a new well is about five weeks, compared to upwards of eight months in Pennsylvania, where the feds are in charge. That might explain why Ohio has more than 20 times as many wells as its neighbor.

“People are concerned,” says Maureen Frederick, one of three county commissioners for Portage, “and rightly so.” According to Frederick, the county not only has no say over the wells, but it also doesn’t see so much as a cent of the revenue collected. Well permits cost $1,000, and the state charges $0.20 per barrel for out-of-state waste and $0.05 for in-state waste, meaning the state collected roughly $2 million for the 14 million barrels of frackwater that were pumped into the ground in 2012.

Portage, which is home to Kent State University, was mostly a farming community 25 years ago, and it has benefited from the growth of ancillary industries that come with fracking. But Frederick, who lives less than a mile from a disposal site, said she wasn’t aware of any economic boon that has followed the injection wells. Local realtors, on the other hand, were “observing the difficulty of people wanting to buy property, and those looking to sell being worried about their property values,” as residents’ concerns about groundwater contamination and earthquakes have grown.

There are good reasons to worry. The dozen earthquakes that rattled Youngstown at the end of 2011 were thought at the time to have been caused by fracking. A new study connecting underground injection to earthquakes seems to confirm those suspicions, and there is growing evidence that the practice is linked to methane leaking into water supplies. (See the GIF below for more.) There are problems with the wells used to store the used fracking brine, too. The wells that this waste is pumped into—called Class II disposal wells—are subject to softer regulations than other disposal wells (there are six classes in all). The EPA estimates that the chance of a given injection well failing is around 1 in a million. But 680,000 injection wells—some 170,000 of them Class II—dot the country, containing about 30 trillion gallons of toxic liquid.

Many of the wells in Ohio are repurposed oil and gas wells that are grandfathered in and exempt from current standards, and government regulators raised concerns about disposal wells contaminating groundwater as far back as the 1980s. At the time, the EPA knew of 23 cases nationwide where drinking water was contaminated by Class II wells. But a recent ProPublica investigation found another 25 cases of alleged contamination from Class II wells between 2008 and 2011 alone. In 1989, the Government Accountability Office, then called the General Accounting Office, filed a report that “says that we have some problems with Class II wells,” says Briana Mordick, a staff scientist with the Natural Resources Defense Council. “They actually wrote up proposed improvements to the regulations, but those regulations have never been updated.” Even perfectly sound wells have leaked after waste was injected at higher pressure than the rock formations holding it could bear. In southern Ohio, waste from one well migrated up through 1,400 feet of rock.

The injection-well boom has led to rising community tensions. At an open house back in May, a mostly middle-aged crowd of about 50 people, many of them academics at Kent State, were surprised to be met with 14 armed Ohio Department of Natural Resources police officers and a police dog, according to the Portage County Record-Courier. An ODNR spokesman told the local paper that the show of force was in response to an earlier problem with protesters, but an octogenarian who attended the meeting told the Record-Courier he’d “never been to a public meeting so oversupplied with armed people.” There have also been recent problems with disposal. In February, Ben Lupo, who owns D&L Energy, an energy production and marketing company based in Youngstown, was indicted on charges of ordering more than 20,000 gallons of brine into the Mahoning River. The company had racked up 120 violations, but didn’t suffer serious consequences until an anonymous tip exposed the illegal dumping.

Two of the three members of the Portage County Commission have voiced their support for a recent bill that would ban injection wells, but even the bill’s sponsor doesn’t think it will get traction in the GOP-controlled state House of Representatives. “I abhor having the distinction of being the injection well capital of Ohio,” Frederick says. But there’s not much she can do about it.