Noah Oppenheim’s plan was simple: Rig a young lobster underneath a waterproof, infrared camera; drop the contraption overboard off the coast of Maine; and see who comes along for a bite to eat. The takers, he expected, would be fish: cod, herring, and other “groundfish” found in these waters that are known to love a good lobster dinner. Similar experiments conducted in the 1990s showed that apart from being snatched up in one of the thousands of traps that sprinkle the sea floor here—tools of this region’s signature trade—fish predation was the principle cause of lobster death. Instead, Oppenheim, a marine biology graduate student at the University of Maine, captured footage that looks like it comes straight from the reel of a 1950s B-grade horror movie: rampant lobster cannibalism. 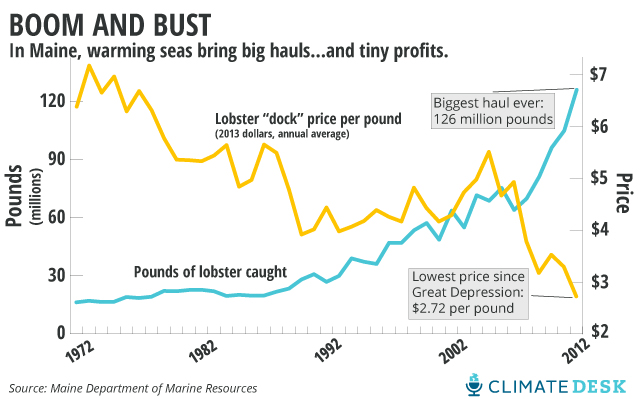 Warming waters can cause lobsters to grow larger and produce more offspring, and the last decade has been the warmest on record in the Gulf of Maine. That, combined with overfishing of lobster predators and an excess of bait left in lobster traps (see info box below), has driven the Maine lobster harvest to thoroughly smash records that stretch back to 1880. One of the side effects of this boom, Oppenheim says, is cannibalism: There are countless lobsters down there with nothing much to eat them and not much for them to eat, besides each other. 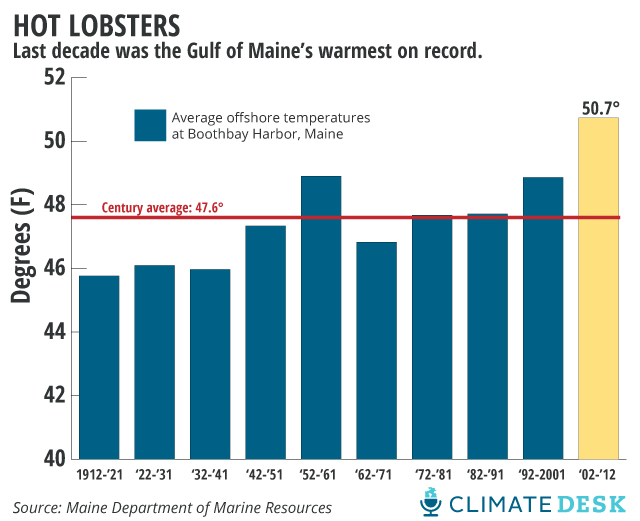 Lobsters are known to chomp each other in captivity (those rubber bands you see on their pincers are more for their own protection that the lobstermen’s), but Oppenheim says this is the first time this degree of cannibalism has been documented in the wild (oh, yes, we’ve got the footage; check out the video above). From his remote research station on rocky Hurricane Island, floating in the lobster-grabbing chaos off nearby fog-shrouded Vinalhaven Island (one of Maine’s top lobstering locales), Oppenheim has seen that young lobsters left overnight under his camera are over 90 percent more likely to be eaten by another lobster than by anything else. 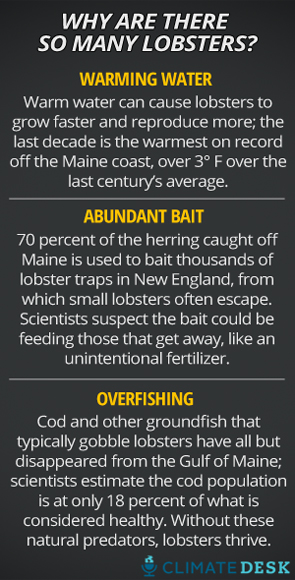 While the lobster boom is clearly a terror for the lobsters themselves, it’s no picnic for the people here whose families have made their livings off lobster since before the Revolutionary War. Lobster prices are down to lows not seen since the Great Depression, taking a serious pinch out of profit margins already made slim by high labor and fuel costs. Even more unsettling is the prospect that the boom could go bust: Southern New England saw a similar peak in the late 1990s, followed by a crash that left local lobstermen reeling for years. Maine’s lobster experts worry that their state is next.

Even more unsettling is the prospect that the boom could go bust.

A crash here could have devastating results. Starting in the late 1980s, lobsters began to dominate Maine’s seafood catch: In 1987, they made up 8.6 percent of the total haul; by last year, that number had climbed to more than 40 percent. In part, the industry’s dependence is due to the fact that, increasingly, there’s an abundance of lobsters and a deficit of anything else. But at the same time, the state’s fishing permit system favors single-species licenses, so many lobstermen are locked into that product, a change from earlier decades where fishermen changed their prey from season to season.

In order to survive, experts say, Mainers will need to get creative with their tastes. For that, maybe they can take a cue from the lobsters themselves.