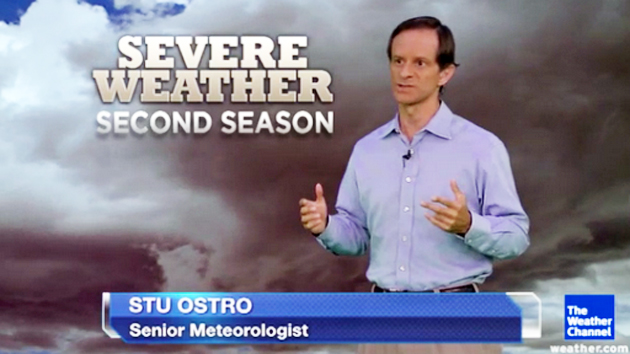 In DC? Join us for Climate Desk Live on June 6 for a conversation about extreme weather and climate change. RSVP here; watch the livestream at 4:30 p.m. EDT here.

Ever since he was a kid, Stu Ostro has been, in his own words, “obsessed with the weather.” One day when he was around 11, he recalls, a lighting strike hit the house across the street in Somerville, New Jersey, while he and his brother watched from their porch—sending fire trucks scrambling, and the French fries that Ostro was eating “went flying.” Back then, Ostro’s weather fascination manifested as a “phobia” of thunder and lightning; nowadays, as a senior meteorologist at the Weather Channel and head of its team of tornado and hurricane specialists, his obsession takes a rather different form. Try perusing his 1,072-slide-long and ever-growing PowerPoint on extreme and unusual weather phenomena—and how they may relate to climate change—and you’ll get some sense of it.

Ostro will speak at this Thursday’s Climate Desk Live on “The Alarming Science Behind Climate Change’s Increasingly Wild Weather” alongside Rutgers University climate scientist Jennifer Francis, whose work on how the warming of the Arctic is driving wacky weather complements his own theorizing. But Ostro didn’t always fit this billing, because he didn’t always buy into fears about global warming. As he puts it, he used to be a “vehement skeptic…not only about a human role in global warming, but also the idea that there was anything unusual about any weather we had been seeing.”

Indeed, circa 1999 Ostro could be found in USA Weekend expressing uncertainty as to “whether humans are contributing to climate change or not.” In this, Ostro channeled the views of many of his fellow TV weather forecasters, who have long nourished a skeptical streak, as a group, towards the notion of human-caused climate change.

“A lot of them are still where I was at,” Ostro explains. 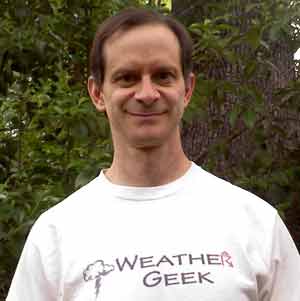 So what changed? Ostro’s conversion was gradual, but the clincher was the stupefying hurricane season of 2005. Remember when forecasters ran out of letters of alphabet to name storms—Katrina, Rita, Wilma—and ultimately had to resort instead to the Greek alphabet (Epsilon, Zeta)?  By the end of the next year, Ostro had decided, as he put it in an email, that he could “no longer accept the mantra of ‘individual weather events can’t be connected to global warming.'” Rather, he now views climate and weather as intricately connected—you change the one, you inevitably change the other. Or as he puts it in his mega PowerPoint presentation: “Climate is a book, weather is chapters and pages.”

As an overworked forecaster in 2005, Ostro was noticing much more than the dizzying number of storms. It was the overarching atmospheric patterns conducive to storm formation that really caught his attention—and that led him to conclude that “something ain’t right with the weather.”

More specifically, Ostro began noticing a pattern of what’s called increasing atmospheric thickness. In other words, the vertical distance between the Earth’s surface and various higher levels of the atmosphere (identified by their atmospheric pressure) was growing. To explain this, Ostro uses the helpful analogy of baking a loaf of bread. “You put dough in the oven, it rises,” he says. “Same thing in the atmosphere.” With increasing heat, the atmospheric ridges of high pressure (regions in which air is falling, rather than rising) were higher, taller, on average. “The frequency of these really strong ridges of high pressure aloft, these anomalous high pressures aloft are increasing,” Ostro explains—with profound consequences.

Strong high pressure ridges are tough to alter. They’re persistent, and so is the weather that accompanies them. It could be a long heat wave; or it could be rain or snow for days on end. “The crazy snow in China, the cold in parts of Europe and Asia this winter, and extreme flooding, and heat waves, it’s driving all of that,” Ostro says. The outcomes are variable—but the extremes are often powerful enough to have dramatic consequences in terms of human lives and also economic losses.

Climate scientists can be a tad condescending towards meteorologists.

Ostro says he has voted for Democrats, Republicans, and libertarians. But his neutral stance on politics hasn’t kept the trolls away. Recently one commenter wrote, “Stu, how does it feel to have your name permanently attached to the biggest media weather hoax in the history of mankind?” One conservative blogger, meanwhile, dubbed him “Mr. Ostroass” and described his “charming ability to repeat Leftist government talking points while miring in his own idiocy.” There were even “a couple of comments which I intercepted before they made it to the site that were threatening,” Ostro notes. That hasn’t stopped him: His PowerPoint documenting eerie weather extremes, ranging from an unheard-of Brazilian hurricane to seasonally odd tornadoes, just gets longer and longer.

So why don’t more of Ostro’s fellow weathermen follow the evidence from the atmosphere, and from the weather maps that they look at every day—just as he has done? “As meteorologists,” Ostro explains, “we are used to always seeing extremes in weather, and we know there have been extremes for as long as there’s been weather. So it might be a little extra hard to convince us that anything out of the ordinary is going on.”

As Ostro adds, it doesn’t help that on occasion, some climate scientists can be a tad condescending towards meteorologists—who apply a sophisticated tradecraft in their work, but aren’t usually known as great physicists or atmospheric theorists. Not all have advanced scientific degrees. Some were originally trained as journalists.

But the wilder weather gets, the harder it is to ignore—most of all for those who analyze it daily. So perhaps some inroads are slowly being made among television meteorologists—nearly two-thirds of which, according to a 2010 study, erroneously think global warming is mostly “natural,” not human caused. Ostro himself still remains cautious—he isn’t ready to connect the past few weeks’ tornado disasters to global warming, and he also questions the early forecasts of a bad 2013 hurricane season. But nevertheless, he knows that, because of climate change, all weather is changing—because all weather now occurs in a different atmosphere.

“The word that I use over and over in every talk,” Ostro says, “is ‘context.'”