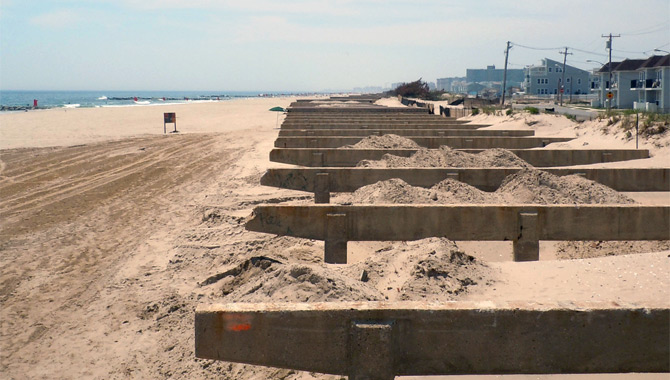 Nearly eight months after Hurricane Sandy destroyed almost three miles of historic boardwalk along the Rockaway peninsula at the southern end of New York City, the shore hums with sounds of $140 million worth of beach recovery: circular saws, jack hammers, and tractors. While construction continues around the clock, officials have reopened beaches in hopes that a vibrant tourist season will kick-start the local economy; on this hot June day, a handful of surfers catching breaks on the city’s only legal surfing beaches is one tangible sign that the work to remediate 1.5 million cubic yards of displaced sand has been successful.

Now, beyond immediate relief work and the big-ticket city spending—the A train is finally rumbling along elevated tracks to Far Rockaway—community organizers can rattle off a shopping list of daily small-dollar needs that don’t usually get their own entries in big-name relief agency spreadsheets: community garden maintenance, recovering lost furniture, or hiring a killer grant writer to ensure the money keeps flowing.

As relief turns to long-term recovery, community activists have their eyes on a group they know has some money left unspent: Occupy Sandy.

After Superstorm Sandy hit New York last October, Occupy Wall Street—the global protest movement against economic inequality that started in downtown Manhattan—set up a new group, Occupy Sandy, and mobilized thousands of supporters to raise more than $1.37 million, according to finances made public on their website.

But here’s the thing: Roughly $1 out of every $5 raised—nearly $300,000—remains unallocated. According to interviews with Occupy Sandy organizers, it’s been more than three months since the group began the process of giving this remaining money over to community groups in the hardest-hit areas. Only a fraction of the $150,000 that has already been allocated to the Rockaways has so far been disbursed.

Meanwhile, as Americans face an ever-increasing number of natural disasters and extreme weather events, more recent victims like those in tornado-devastated Moore, Oklahoma, are looking to Occupy Sandy as a model to replicate, warranting a closer look at how the group balances its books.

So far, there’s no clear picture of how nearly $240,000 of funds already allocated have been, or will be, spent. Bre Lembitz, an original Zuccotti Park occupier and now Occupy Sandy’s bookkeeper, attributes the delay mostly to paperwork snags beyond the group’s control: “The documentation has fallen by the wayside,” she says. “It hasn’t been a priority for people.”

Some Rockaway residents say that Occupy Sandy is keeping them in the dark about how they will dish out its remaining money, and that the group, which has no one central location in the city but operates from several hubs, isn’t including them in decision making.

Milan Taylor, the 24-year-old director of the Rockaway Youth Task Force, says Occupy Sandy “was brilliant at first.” In the immediate aftermath of the storm that destroyed 175 houses and businesses here and left 34,000 customers were left without power, sometimes for months, Occupy Sandy volunteers worked side by side with locals to lug water and blankets to people in damaged homes or darkened residential towers. They gutted and mucked out houses and educated locals about the health risks of mold infestations, coordinating their efforts via a fleet of vans; they were applauded for agility while the big agency relief machinery ground into motion.

“I believe we’ve been hugely successful and we’ve done a lot with a little money,” says Terri Bennett, 35, the codirector of Respond and Rebuild, an arm of Occupy Sandy in the Rockaways. At this point, she says, Occupy Sandy has worked at around 300 homes in the Rockaways and conducted extensive one-on-one surveys of local needs. 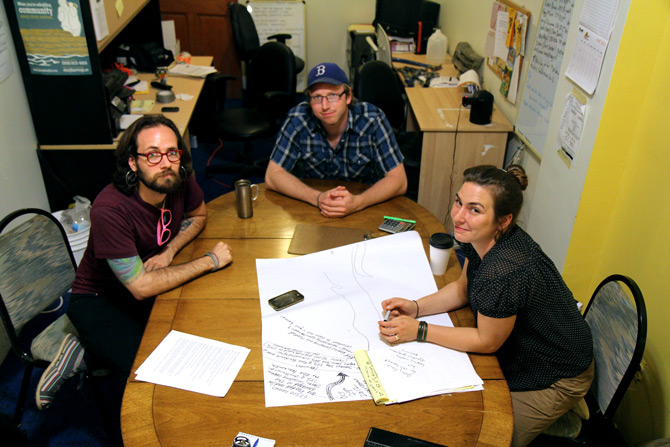 From left: Occupy Sandy organizers Brett Goldberg, Gabriel Van Houten, and Terri Bennett discuss the future of the movement in the back offices of the Pilgrim Church of Arverne. James West
“I personally believe they have outstayed their welcome,” says Milan Taylor.

But the relationship risks being soured, Taylor says. If Occupy Sandy doesn’t tell the Rockaways community how it plans to spend the rest of the money, “I personally believe they have outstayed their welcome,” he says.

Taylor’s group received Occupy Sandy grants totaling $17,800 in January, but he wonders what will become of the remaining Occupy cash. Just a portion of it could help his group hire a part-time professional caseworker to track teenagers whose education was disrupted for months after the storm. He says he has found it difficult to get information from Occupy Sandy. “Now there’s this additional pool of money they have,” he says, “and it’s like they are changing the rules as things are going along.”

But according to Lembitz, the group’s mission has always been to transition to a community-driven approach—it has just taken a little time to get up and running. “Ideologically this is the best idea, but that doesn’t mean necessarily it can be put into practice,” she says. “I naively thought it was going to be much easier to set up, and it wasn’t.” Occupy Sandy has now convened a nine-person panel to serve the specific needs of the Rockaways, including four residents affiliated with Occupy Sandy, and to decide how their chunk of money gets spent. There is no timeline for this, but organizers say some grants might begin to flow in another month’s time. As for the nearly $300,000, Lembitz says Occupy Sandy is “in the process” of having open meetings “where the community can come together and decide how best to allocate the rest of the money.” But apart from one debrief session, the group’s public calendar is bare through the end of the year. 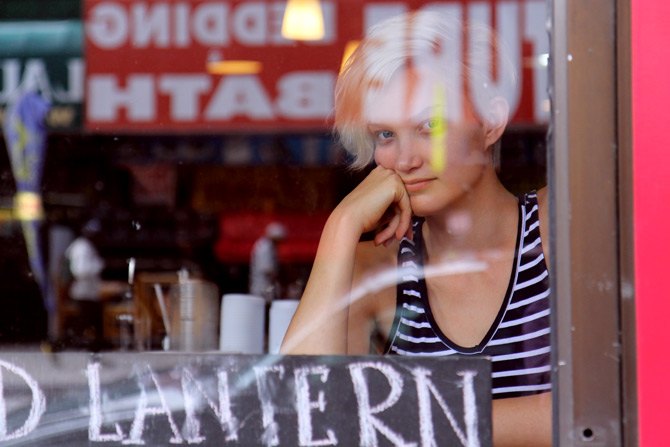 The Rockaway peninsula is split from east to west along historic socioeconomic lines: The poverty rate in densely populated Far Rockaway to the east, where there are number of big public housing developments and nursing homes, is around 22 percent. On the western tip in Breezy Point, it’s 2 percent. That makes navigating local needs and politics especially important.

“It’s pretty frustrating,” says Robyn Hillman-Harrigan, who runs Shore Soup Project, a group that provided more than 50,000 hot meals door to door in the aftermath of the storm. She goes out of her way to say she’s supportive of the bigger Occupy Sandy principles, and thinks its efforts have been largely commendable. But she can’t help but see the irony of a small group making decisions about money meant for the many. “It feels like a club,” she says.

Terri Bennett defended the makeup of the new Rockaway panel. “There’s a really fine line between inviting enough people to participate, and inviting too many,” she says. She also says the group wants to avoid being overwhelmed by requests and repeating the mistakes of the past: “I also think that those [community] groups are kind of the same people over and over again that are already involved in these processes, but if we invite people who aren’t normally invited to the table, then it builds a bunch of peoples’ capacities.” This hasn’t stopped the group investing $100,000 elsewhere in a FEMA-approved Staten Island group that, unlike in the Rockaways, puts Occupy Sandy in direct weekly contact with a diverse coalition of established community and faith leaders.

Youth leader Milan Taylor says it’s vital for the movement to communicate its plans clearly: “The funding was raised in the name of the Rockaways,” he says. “It’s not complicated if you’re from the community. But for an outsider coming in and trying to understand an entire community history in six months, it’s impossible.” 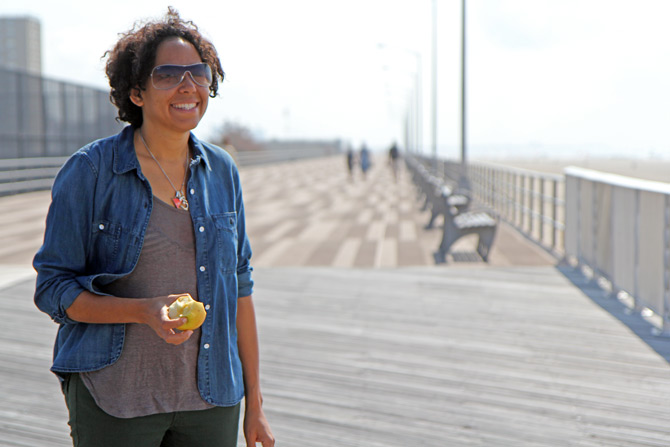