Join us for an in-person conversation with Michael Mann at Climate Desk Live on Wednesday May 15 at 6:30 p.m. in Washington, DC.
To attend, please RSVP to cdl@climatedesk.org.

Back in 1998, a little-known climate scientist named Michael Mann and two colleagues published a paper that sought to reconstruct the planet’s past temperatures going back half a millennium before the era of thermometers—thereby showing just how out of whack recent warming has been. The finding: Recent Northern Hemisphere temperatures had been “warmer than any other year since (at least) AD 1400.” The graph depicting this result looked rather like a hockey stick: After a long period of relatively minor temperature variations (the “shaft”), it showed a sharp mercury upswing during the last century or so (“the blade”).

The report moved quickly through climate science circles. Mann and a colleague soon lengthened the shaft of the hockey stick back to the year 1000 AD—and then, in 2001, the UN’s Intergovernmental Panel on Climate Change prominently featured the hockey stick in its Third Assessment Report. Based on this evidence, the IPCC proclaimed that “the increase in temperature in the 20th century is likely to have been the largest of any century during the past 1,000 years.”

And then all hell broke loose. 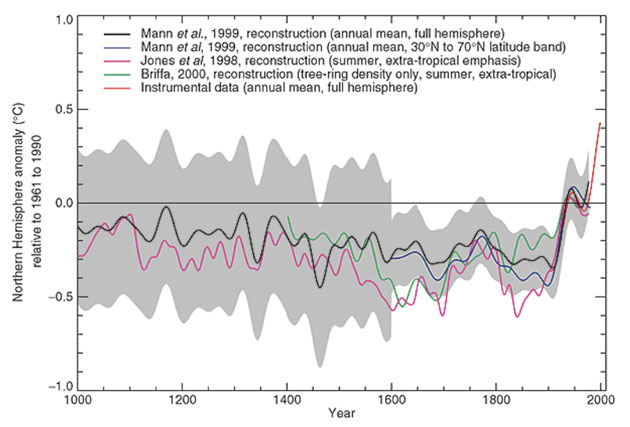 Mann tells the full story of the hockey stick—and the myriad unsuccessful attacks on it—in his 2012 book The Hockey Stick and the Climate Wars: Dispatches From the Front Lines; Mann will appear at a Climate Desk Live event on May 15 to discuss this saga. But to summarize a very complex history of scientific and political skirmishes in a few paragraphs:

The hockey stick was repeatedly attacked, and so was Mann himself. Congress got involved, with demands for Mann’s data and other information, including a computer code used in his research. Then the National Academy of Sciences weighed in in 2006, vindicating the hockey stick as good science and noting:

The basic conclusion of Mann et al. (1998, 1999) was that the late 20th century warmth in the Northern Hemisphere was unprecedented during at least the last 1,000 years. This conclusion has subsequently been supported by an array of evidence that includes both additional large-scale surface temperature reconstructions and pronounced changes in a variety of local proxy indicators, such as melting on ice caps and the retreat of glaciers around the world.

It didn’t change the minds of the deniers, though—and soon Mann and his colleagues were drawn into the 2009 “Climategate” pseudo-scandal, which purported to reveal internal emails that (among other things) seemingly undermined the hockey stick. Only, they didn’t.

In the meantime, those wacky scientists kept doing what they do best—finding out what’s true. As Mann relates, over the years other researchers were able to test his work using “more extensive data sets, and more sophisticated methods. And the bottom line conclusion doesn’t change.” Thus the single hockey stick gradually became what Mann calls a “hockey team.” “If you look at all the different groups, there are literally about two dozen” hockey sticks now, he says.

Mother Jones‘ Jaeah Lee traced the strange evolution of the hockey stick story in this video:

Indeed, two just-published studies support the hockey stick more powerfully than ever. One, just out in Nature Geoscience, featuring more than 80 authors, showed with extensive global data on past temperatures that the hockey stick’s shaft seems to extend back reliably for at least 1,400 years. Recently in Science, meanwhile, Shaun Marcott of Oregon State University and his colleagues extended the original hockey stick shaft back 11,000 years. “There’s now at least tentative evidence that the warming is unprecedented over the entire period of the Holocene, the entire period since the last ice age,” says Mann.

So what does it all mean? Well, here’s the millennial scale irony: Climate deniers threw everything they had at the hockey stick. They focused immense resources on what they thought was the Achilles’ heel of global warming research—and even then, they couldn’t hobble it. (Though they certainly sowed plenty of doubt in the mind of the public.)

What’s more, even if they’d succeeded, in a scientific sense it wouldn’t have even mattered.

“Climate deniers like to make it seem like the entire weight of evidence for climate change rests on the hockey stick,” explains Mann. “And that’s not the case. We could get rid of all these reconstructions, and we could still know that climate change is a threat, and that we’re causing it.” The basic case for global warming caused by humans rests on basic physics—and basic thermometer readings from around the globe. The hockey stick, in contrast, is the result of a field of research called paleoclimatology (the study of past climates) that, while fascinating, only provides one thread of evidence among many for what we’re doing to the planet. 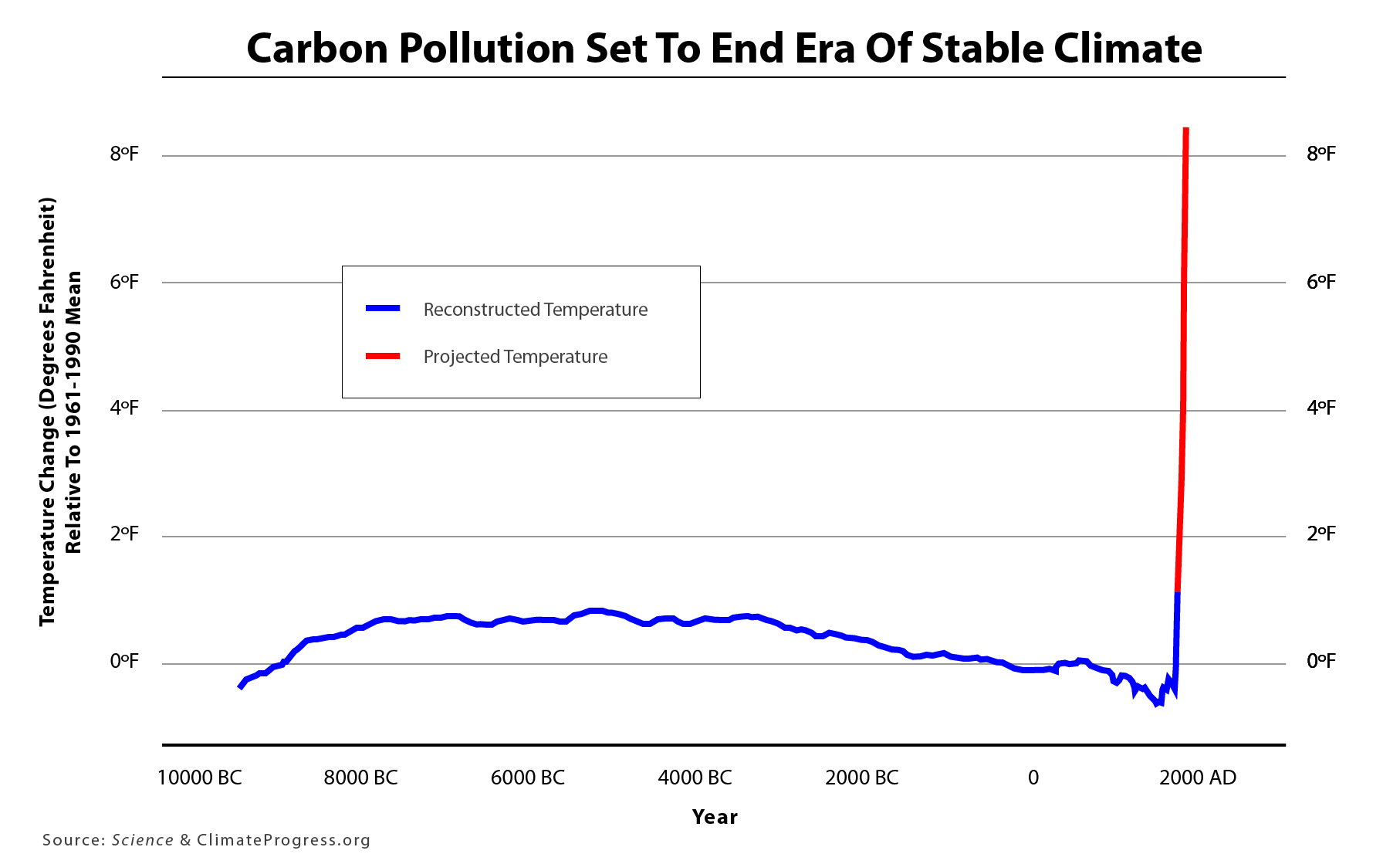 Meanwhile, the hockey stick’s blade doesn’t just stop rising of its own accord. It’s just going to go up, and up, and up, as the image above, combining the Marcott hockey stick with projections of where temperatures are headed by 2100, plainly shows.

When he shows that graph to audiences, says Mann, “I often hear an audible gasp.” In this sense, the hockey stick does indeed matter—for it dramatizes just how much human irresponsibility, in a relatively short period of time, can devastate the only home we have.