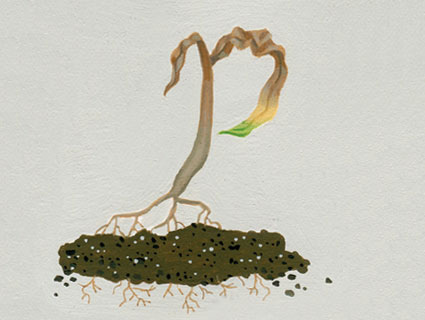 Western Sahara, a sparsely populated slice of desert on Africa’s northwestern coast, doesn’t get much ink as a potential crisis point in the global food system. You’ve probably never heard of the long-standing independence movement in the Morocco-controlled territory—or that the area harbors vast stores of an element critical to contemporary agriculture.

Morocco, it is thought, holds up to 85 percent (PDF) of the globe’s known phosphate rock reserve—and a lot of it lies in Western Sahara. Morocco’s royal family thus controls what Jeremy Grantham, cofounder of the prominent Boston-based global investment firm Grantham, Mayo, Van Otterloo & Co., called the “most important quasi-monopoly in economic history.”

Our P use “must be drastically reduced in the next 20-40 years or we will begin to starve.”

Who cares about phosphorus? For starters, every living thing on Earth—including humans—since all the crops we eat depend on it to produce healthy cells. Until the mid-20th century, farmers maintained phosphorus levels in soil by composting plant waste or spreading phosphorus-rich manure. Then new mining and refining techniques gave rise to the modern phosphorus fertilizer industry—and farmers, particularly in the rich temperate zones of Europe and North America, quickly became hooked on quick, cheap, and easy phosphorus. Now the rest of the world is scrambling to catch up, and annual phosphorus demand is rising nearly twice as fast as the population.

Our addiction to cheap P (as it’s known in the periodic table) is risky for two reasons. The first, better-known one is that not all the phosphorus that farmers put on their land is absorbed by crops. A lot leaches into water, ending up in lakes and rivers, where it causes algal blooms—which, as they decompose and suck up oxygen, create dead zones.

But the scarier reason is that, like any mined material, phosphate rock is a finite resource, and there’s fierce debate about just how long our supply can last. “Peak phosphorus” doesn’t get a lot of buzz, but it should. In a recent essay in Nature, Grantham, who also runs an environmental foundation, put the case bluntly: Our P use “must be drastically reduced in the next 20-40 years or we will begin to starve.”

Grantham isn’t alone. A group of Australian and European academics caused a small furor in 2009 when they predicted that P production would peak by 2030 (PDF), after which point prices would rise dramatically. This would squeeze farmers, drive up food prices globally, and hand massive geopolitical leverage to the Moroccan government, which reportedly owns a 94 percent stake in the country’s mining and fertilizer company.

The United States does have some phosphate reserves, the most heavily mined of which are in Florida. But phosphate mining is an environmentally devastating project—it requires stripping large swaths of land and generates massive amounts of a waste product called phosphogypsum, which contains low levels of radiation as well as a range of toxic heavy metals. In Florida, no one knows what to do with the stuff, so it has been sitting in huge piles in mining regions. The Environmental Protection Agency estimates that central Florida already houses nearly 1 billion metric tons of phosphogypsum, and 32 million metric tons are added each year—the equivalent of the “combined weight of approximately 6.4 million elephants,” as an EPA document helpfully notes. Moreover, Florida’s phosphate reserves are dwindling fast—they’re expected to run out within 25 years—and we’re already importing about 10 percent of our phosphate from Morocco.

It wouldn’t hurt to figure out safe ways to reuse an abundant source of P: human pee.

Just as we can’t drill our way out of our addiction to oil, there’s no mining our way out of the phosphorus problem. Solving it will mean changing our way of farming and eating. Luckily, that’s possible—and in another paper (PDF), that same group of Australian and European agriculture experts described how: We can curb our phosphorus habit by eating less meat (carnivorous diets burn as much as three times more P than vegetarian ones), reducing food waste, and shifting to farming techniques that conserve soil nutrients, including organic agriculture and permaculture.

But none of this will be enough without a serious effort to recycle the P that we now squander—and that means better use of animal manure. Right now meat production is concentrated in areas like North Carolina and Iowa, whose massive feedlots produce more manure than can be absorbed by nearby land. Smaller and more widely distributed meat operations would help on that front. And it wouldn’t hurt to figure out safe ways to reuse an abundant source of P: human pee (PDF). (There’s enough phosphorus in your annual output of urine to provide P for more than half of all the grain you consume in a year.) No one argues that any of this will be easy. But neither will paying a king’s ransom to the Moroccan royal family.